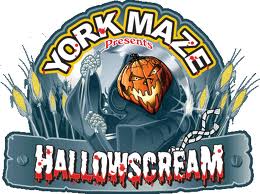 I was privileged enough to be invited to attend the press night of York Maze Hallowscream in 2013, and one of the main things I remember about this scare park is the ingenuity implemented to try and give people a unique experience, rather than a tweaked copy of the usual scare park ideas. Whilst my experience at York Maze Hallowscream was complimentary, this review is my honest and unbiased opinion.

On arriving at York Maze we were surprised at how large the venue was. One of the upsides of using an existing attraction is that there tends to be more space to utilise, and a better foundation to work upon. Facilities are of a higher standard and the site on the whole appears better maintained than some of the seasonal only scare parks we have visited. One of the nice things about York Maze’s Hallowscream is the back story to the nights events. Farmer Tom Pearcy who owns the site had recently discovered a burial site, which turned out to be the remains of a travelling circus where the performers and animals were tragically killed, and it is these spirits you will encounter during your stay.

The first attraction we went to was The Seance. This attraction is something new for scare parks and not something we have heard of before. The Seance is an attraction where you see the resident medium attempt to invoke spirits on the farm through the use of an Ouija Board, Pendulum and Spirit Box. Although the attraction is something new, and did provide a decent scare, the rest just seemed too scripted and obvious. Wires were not well enough concealed and events were predictable and obviously rehearsed. Although slightly disappointed with the first attraction we applaud York Maze for trying something new, and hope that after some more trial and error this becomes just as good as what we had yet to see.

Next we headed towards The Freak Show. This attraction was also a first for us as it was not a traditional scare maze but more of a scare labyrinth. Once out into the corn fields the usual security of a one way path was lost as we were faced with multiple openings with twists, turns and dead ends. this was an excellent addition to the standard corn maze and successfully heightened our sense of panic as added to the usual scares was confusion and disorientation. Add to that being chased by the dreaded wolfmen, this maze definitely got our hearts racing. In the downside, after encountering several actors running away from these wolfmen, it would have been nice if we had ourselves come across a few more of these ourselves. During our time in the maze we only saw one, and the chase never really took off.

The second maze we experienced was the Difference Engine. I was quite nervous about this one as although I adore scare attractions and would like to think of myself as quite brave, I have never had to go in alone. The Difference Engine splits you apart so each participant has their own experience. As scary as that may sound, this is not a maze to miss! The theme and costumes for this maze I found excellent, and the actors added to the experience brilliantly. I found the focus of this maze to be on sensory deprivation to ensure we were at our most scared. I also loved the fact that when we finally hit open air, and became so relieved to have survived, that it turned out we hadn’t finished at all. The added sense of ‘when will this end’ only made the final part of the maze so much better. One word of caution for this maze however is that there is ALOT of smoke. If you suffer from asthma I would not recommend this one for you.

The third and fourth mazes were set next to each other. First was Barnageddon. A returning maze from last year, Barnageddon was an impressive set. This maze took the actors in a more stereotypical horror direction, with gruesome masks and chainsaws coming up behind you this was a very well executed traditional scare maze.

Second was Reincornation, the maze you do not want to enter if you have a fear of clowns. Again we found ourselves split up from the people we came with, and sent in with other we did not know in very small groups. One swift way to make new friends is to cling to your new found partner with dear life as you negotiate the twists and turns of this maze with horrific clowns on your tail. Another excellent sensory overload with tipping walkways an gravity rooms will have you stumbling around for the exit in sheer panic. 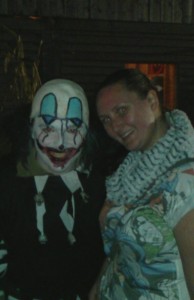 After the mazes you are free to enter the Stumble Inn for a well deserved pint to clam the nerves before you head home. Overall we thoroughly enjoyed York Maze. The Seance requires the most tweaking but the other mazes all provided something new, and were well put together. A special commendation has to go to the creator of the Difference Engine which in terms of making me fearful was by far the winner!

I hope that we get to experience this maze again in 2014, I can’t wait to see what the creators come up with this time…..