MIF – What if Women Ruled the World? 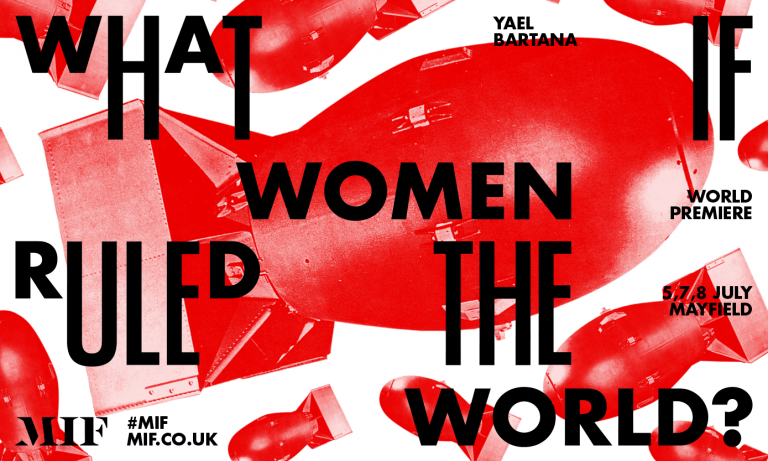 For Manchester International Festival, we only made it to two events. Our first, Party Skills for the End of the World, was outstanding, so we had high hopes for our second event, What if Women Ruled the World. Created by Yael Bartana, the concept was simple;

Arriving at a moment of unprecedented worldwide flux, this timely, vital and dramatic new art work ponders one of modern life’s great questions – what if women ruled the world?

Inspired by Kubrick’s Dr Strangelove, which sees a post-apocalyptic future with ten women to every man, and the world’s dominant male leaders working to determine the future of the human race, Yael flips the scenario, retaining the ratio of ten women to each man, but putting women back in the driving seat.

Before entering we’re held in a waiting area with a bar and some unusual visitors ‘dropping in’. It was a great way to set the scene and get in the festival mood.

The scene is set in the war room, where each night, a cast of actors is joined by a group of female experts who must decide the most imminent and best course of action, to save humanity and the world.

The cast of actors is very strong. Effortlessly bringing humour into a serious situation, putting the experts at ease and guiding them through what must have been a rather strange process.

The setting is very fitting of the topic. Located in the abandoned Mayfield Station near Picadilly, the feeling of desolation is rife. Closed since 1986, there is no welcoming or hope as you take your seat in the audience. The evening begins with our troop of actors replaying the final scene from Dr Stangelove, before resetting, and replaying once more, as women.

The crises of the evening seem to be determined by the experts, meaning no two performances are likely to focus on the exact same issues. For our performance, our experts were;

Susan George – A Franco-American scholar, writer and activist
Dr Lina Khatib – Head of the Middle East & North Africa (MENA) Programme at Chatham House, and former director of the Carnegie Middle East Center in Beirut
Dr Marion Koopmans – A leading virologist, focusing on viruses that have the highest public health impact, in close collaboration with international partners
Anni-Helena Ruotsala – A Sami, the only protected, indigenous people of Scandinavia, and an archaeologist and current Environmental Secretary of the Finnish Sami Parliament
Natasha Walter – A British feminist writer and human rights activist

The dynamics of the group made for interesting alternative viewpoints, with each woman superbly representing their field of expertise. There were some more wooden and awkward moments, but you can forgive our experts for not gelling immediately with a faux scenario, and the actors did well to guide them through the conversation. There were times when some points seemed a little drawn out, and it could be quite repetitive when the same questions were posed to each expert in turn. It’s difficult to give each speaker time to get their point across, while still keeping everything running smoothly and progressing.

The course of the evening included regular interruptions from the Doomsday Clock, with examples from various points in our history of how close the world was to a human-caused global catastrophe. We were also provided monologues from the actors, with tales of how the global crisis at hand had affected them. The dialogue was hard hitting and provided a jolting change of pace to the ongoing discussions.

Some of the points raised by the experts were captivating. Suggesting that borders should be removed to allow free movement, discussions of maintaining equality into future generations when women will naturally lose the advantage of numbers, and to give control of resources back to the people who understand them the most could have fascinated me for hours. But this was an art piece, and to combine this discussion with contemplation and soliloquy is a difficult task.

Despite being billed to finish around 9:30 pm, the event ran way over, coming to a conclusion around 9:50 pm. It may have only been 20 minutes over, but when you’re in a cold, disused railway station, that can be quite a long time. It was evident that the actors were trying to move things along without interrupting or cutting off any of the experts, but it would have been nice, and also in keeping with the situation, if they had been rushed through a little more. We were also asked to pose questions to the experts on entry, but none of these seemed to be asked. I’m not sure if this was because we ran out of time, or if there was nothing suitable.

Although there was some refining to do, What if Women Ruled the World was still well received and a thought-provoking piece on humanity, survival, and the role of women in our future. It would be interesting to hear how the other evenings went, and the different dynamics and issues posed by the different experts. Some refinement is needed, but you wouldn’t be disappointed with this piece, and I look forward to seeing it grow.