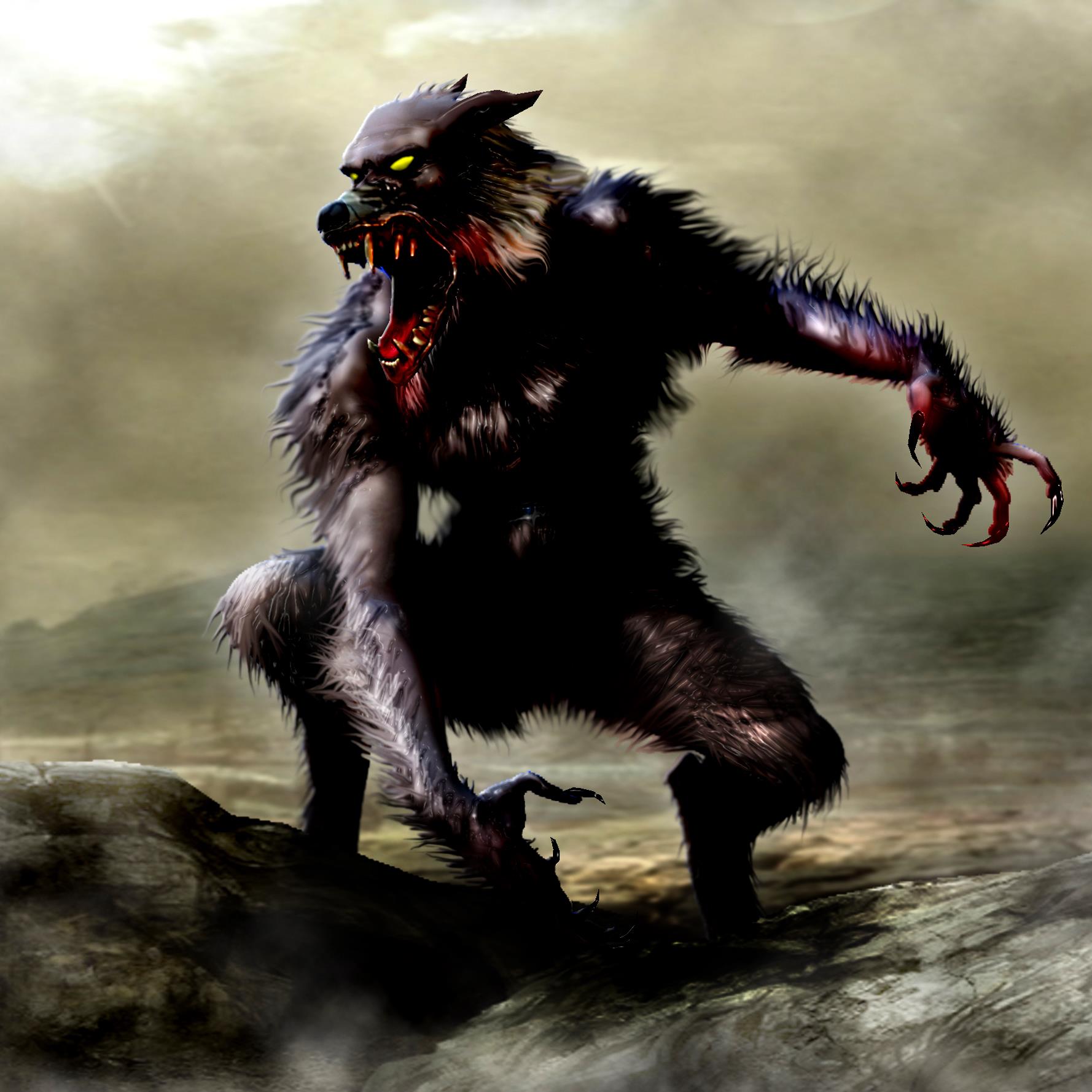 Werewolf is a party game I play at least once a month, and it has to be by far my favourite. The game is based on the party game Mafia, created in 1986 by Dmitry Davidoff, and in 1997, the game was reworked with a Werewolf theme by Andrew Plotkin. The Werewolf variant became widespread at various tech events, including the BarCamp, which is where I played my first game.

The game can be made a simple or as complicated as the group decides. I will start by explaining the very basics of the game, with more roles and rules being introduced as we go along.

The aim of the game depends on your alignment, and the most basic alignments are Villager and Werewolf. There are some roles which give the player their own alternative aim, but these will be discussed as the roles are introduced. The aim of a Villager is to find and kill all the Werewolves, and the aim of the Werewolves is to remain undetected long enough to kill enough Villagers until they outnumber them.

Games are moderated by one person, known as God. your God is probably the most important person for a game to be successful, they must know the rules and be able to control the room. One of the most important rules in Werewolf is that God is always right. If you think God has messed up, you cannot challenge them, or you risk angering your God, who will smite you.

The village is set up by players forming a circle, and roles being distributed, usually by passing out cards which indicate on them the role you are to play. Cards are then usually collected back in by the moderator to ensure no one accidentally sees someone else’ card.

Cards can be purchased, there are a number of Werewolf card decks available, or made. You can easily play a basic game with playing cards (assigning roles to different cards, i.e. Jokers are wolves) or even just use cut of pieces of paper you have written the roles on.

Games have two major phases, the night phase, and the day phase.

During the night phase all players go to sleep, (close eyes and make noise to cover the sound of any goings on) and your God will wake up each role in turn for them to take their action. In a basic game, your God will awaken the Werewolves, who must choose someone to kill. Choosing a victim is done by pointing at the person the wolves wish to die, and this choice must be unanimous. Once the victim has been chosen, the wolves go back to sleep, and your God will awaken any other roles being played in turn. Once complete, the village awakes.

Once the village has awoken, your God will announce who has been killed by the Werewolves. That person must then leave the circle silently, and watch the rest of the game from the graveyard. It is then down to the villagers to discuss who they believe is a wolf. Once a suspicion has been voiced, players may wish to nominate their suspected wolf. Once a player has nominated another person, all discussion must stop, and God will ask if anyone wishes to second that nomination. if no one chooses to second, the discussion will continue, however, if a second comes forward, God will commence the trial.

For a trial, the person who made the nomination is given the opportunity to tell the group their reasons for suspecting the accused of being a wolf. This is then followed by the person who seconded the nomination, adding their reasons also. Once done, the accused is given the opportunity to defend themselves before the trial is taken to the vote. Villagers must now vote on whether they wish to lynch the accused, a vote to lynch is a majority vote, with the total number of villagers not including the accused. (i.e. 9 players, the accused doesn’t count, so 8 villagers voting, 5 required for the lynch to carry). If the vote for a lynch carries, the accused is sentenced to death and silently leaves the circle for the graveyard, and the night phase begins. If the vote does not carry, discussion continues.

Day phases are timed by God, so if villagers take too long to decide on who to lynch, the night phase can commence without any death that day.

If you have a new group who haven’t played before or a lot of people who might not know each other, it’s often a good idea to start the first morning with everyone in the circle introducing themselves, by telling everyone their name, and their job in the village, (not role, job, such as farmer, milkmaid etc). This helps to get people talking, as inexperienced (and even sometimes experienced) groups tend to spend the first few days not knowing what to do. Another idea which can work quite well is that when introducing yourself to the group, you have to come up with an interesting fact about yourself. However, if you are a Werewolf, you have to lie…..

There are two roles that every game must* include; Villager, and Werewolf. Although it’s normal to add in at least a few roles, a basic starter game can be played with just these 2. I personally prefer a ratio of 1 wolf to 4 villagers, and a minimum of 8 players for a game, however, a minimum of 10 is better.

*Unless you want to be really mean, but I’ll explain the no wolves game later

The aim of a Villager is to find the Werewolves and have them lynched before they kill off the village. Villagers win if all Werewolves are lynched. Villagers are never awoken during the night, as they have no special ability.

The aim of the Werewolf is to kill off the villagers and avoid detection. Werewolves win if they outnumber or equal the number of Villagers left alive. Werewolves are the first role to be awoken by God during the night phase, they are asked who they would like to kill. The target is picked by pointing at the victim, and all Werewolves must agree on who to kill before God will agree. In the unlikely event that the Werewolves cannot agree, it is at God’s discretion how to proceed. Your options are usually to have a ‘no kill’ night, or to kill a random Werewolf as punishment instead.

After you have the basics down, you can choose to add in ‘Special Roles’. There are a number of special roles which can be played, so I will try to introduce them slowly.

The Seer is awoken each night by God and asked who they would like to see (indicated by pointing). God then indicates to the Seer if the person they have selected is either a Villager, (indicated by praying hands) or a Werewolf (indicated by claws). Special roles are not revealed, only the person’s alignment, so a healer would be indicated as Villager.

It is wise as the Seer not to reveal your role to the village too quickly, as this will make you a target for the Werewolves. In my personal experience, I would not reveal as Seer unless you have 2 confirmed wolves (still in the game) or can validate 50% of the village as not wolves. However, these are loose guidelines and it is up to you to develop your own style of play.

A tactic which we commonly use in our games is called the ‘proxy seer’. The Seer is possibly the most valuable role for the Villagers, and if killed off too early, valuable information can be lost. The way the tactic works is that on the first night, the Seer chooses to look at the person next to them. If that person is a Villager, the Seer must then find a subtle way to indicate to that person during the next day phase, that they are the Seer. If the person sat next to you is a Wolf, then look at the person on the other side of you the next night. If that person is also a Wolf, you are unlikely to be able to use the proxy seer tactic, however having 2 Wolves found in 2 nights is excellent work, and depending on the size of your group, probably worth just telling everyone your findings instead. Once you have revealed yourself to the Villager next to you, they become the proxy seer. Each following morning you should subtly tell your proxy seer who you looked at, and whether or not they are a Villager or Wolf. It is sometimes even possible to work your way down the line, sharing the information with everyone who appears to be a Villager. This can be quite difficult to do without the Wolves spotting you, but the more Villagers who have this information, the safer the information will be.

The proxy seer is used for 2 main reasons;

1. The Seer is killed during the night – Their information isn’t lost, the proxy seer can then announce that they know the Seer is dead, and tell everyone left in the group what checks have been conducted so far, and what the results were.

Proxy seer is not an easy tactic to use and requires two people who can be very subtle to pull it off, but when used correctly, can be the saving tactic for the Village.

It is recommended to not exceed 5 minute days unless there is a good amount of discussion occurring. Larger games should have shorter days to move the game along faster, as these can end up taking a very long time and can be quite boring for those killed off very early. I would recommend;

Defending against an accusation is very important, no one, villager or wolf should want to be lynched. As a tip, start your defence with “I am not a wolf”. Then, you should address each point your nominees have made, and provide your counter-argument. Be careful of assuming that if you are a Villager, it means that anyone who nominates you must be a wolf. It is just as likely that they are a Villager with a valid suspicion who just happened to get it wrong. One other important thing to remember is if you have a special role. Having special roles reveal themselves too soon in the game is dangerous, as they become a target for the Wolves, and die quickly. However, losing a special role in a lynch is much worse! So if you are put on trial and you’re a special role, don’t be afraid to tell everyone that this is the reason you shouldn’t be lynched! In addition, if you do decide to reveal your role, make sure you give specifics, i.e. which role you are, and if you’re a seer who you have checked. You’re a target now, so you need to make sure your information is shared with the village quickly.