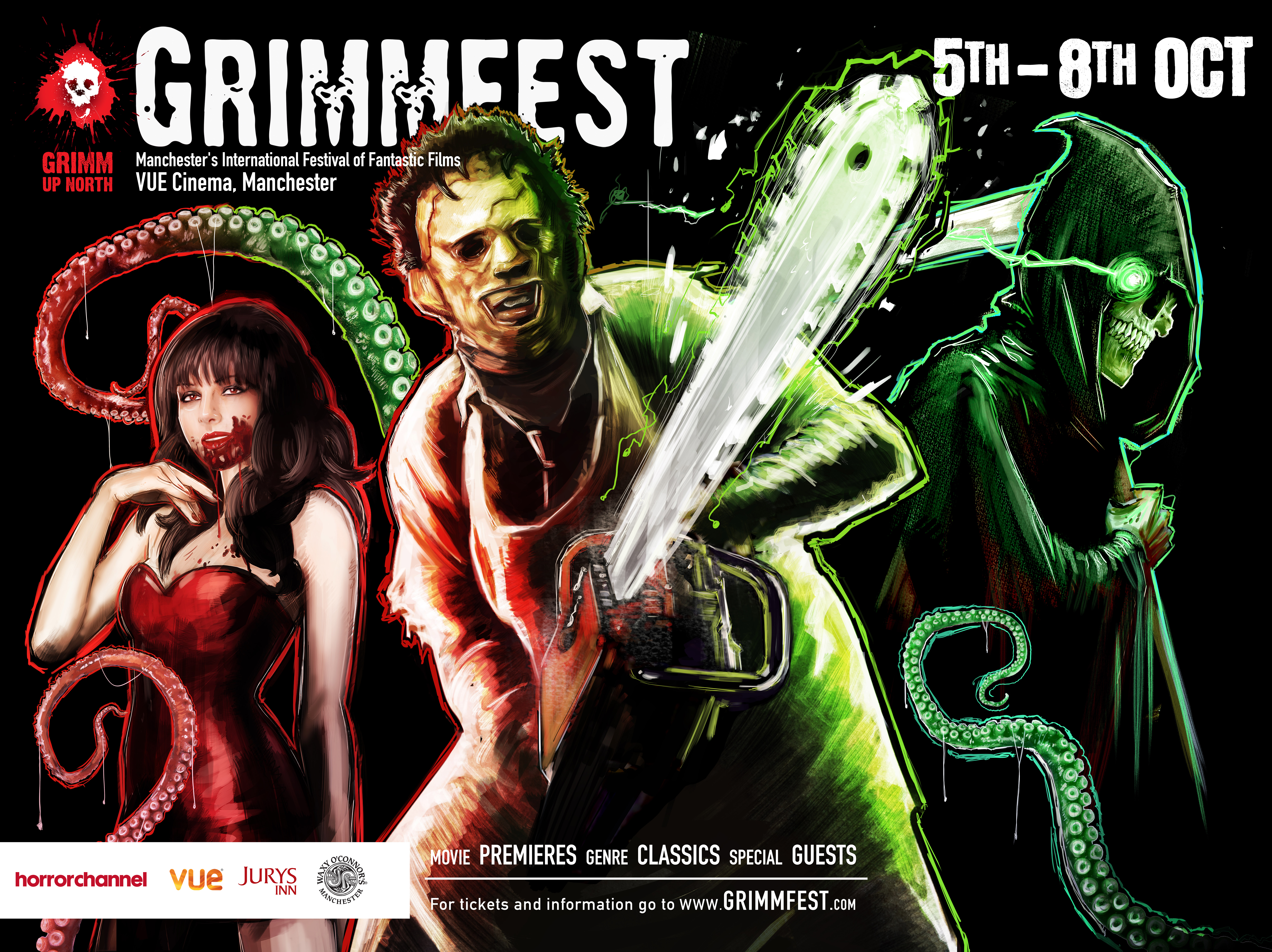 Grimmfest, Manchester’s festival of horror, cult and fantastic film is back; bigger, bolder, and bloodier than ever before! With the usual mix of European and World Premieres, and a fiercely feminine focus, here are the films we’re most excited about!

Alex is no fan of horror movies, but reluctantly agrees to accompany her boyfriend to Slasher Sleepout, an extreme horror-themed event, combining camping trip, survival game, and spook house. But then the fun turns deadly, and Alex must confront her worst fears and personal demons if she wants to escape with her life and sanity intact…

As a lover of pervasive games, escape rooms, and horror, this film depicts the exact type of event I would likely sign up to myself! A post-modern take on the backwoods slasher this mixes and matches – and pastiches and parodies – its various classic genre tropes with deft and devious sleight of hand.

Christmas in small-town suburban America, and Ashley agrees to babysit twelve-year-old Luke while his parents are at a dinner party. Far from resenting being left with a sitter, Luke has high expectations for the evening – Ashley is the girl of his dreams, and tonight he intends to declare his feelings. Things get very awkward very quickly – and then take a shocking turn for the worse as Ashley and Luke find themselves under attack from mysterious intruders. But nothing is quite as it seems…

Christmas AND horror? Yes please!  Better Watch Out is a seasonal spin on the home invasion genre; a deviously-plotted, truly malignant black comedy.

A young woman finds herself trapped in a series of increasingly violent situations, in an ever-more-unstable world, in which her very identity seems less and less certain.

I’ve always had a huge soft spot for Asian horror, and who can resist a Japanese schoolgirl splatter horror! Grimmfest brings the latest manic masterpiece from cult Japanese auteur Sion Sono to the big screen, and I’ve been told it has the single most jaw-dropping sequence the Grimmfest team has seen in years!

In late 19th Century rural Russia, it was common practice to photograph dead relatives, posed as if they were alive. It was also believed in some quarters that the camera was a means to capture the human soul. Travelling with her fiancé to his ancestral home, to prepare for a traditional wedding ceremony, Nastya is about to discover that such beliefs and practices are still very much alive…

I don’t think I’ve ever seen a Russian horror film, but The Bride looks like a supernatural Gothic shocker you don’t want to miss. Plus, film producer Vladislav Severtsev will be there to present the screening.

Attack of the Adult Babies

When two teenagers are forced to break into a remote country manor to steal Top Secret documents, they uncover a sinister world of sexual depravity and monstrous ambition, where powerful perverts have their every grotesque whim catered to, while plotting a terrifying future for the rest of the world…

Not your typical horror film, but Dominic Brunt has never failed to entertain, and Attack of the Adult Babies should be no exception. The closing film for the weekend looks set to bring a close with a bang.

Also worth a mention:

Grimmfest will be presenting the UK Premiere of the utterly jaw-dropping Dave Made a Maze. If ever a film could be described as “pure Grimmfest”, this is probably it. Part slacker comedy, part retro-80s fantasy adventure it brings a whole new meaning to the phrase “cardboard set design”.

Adelaide Clemens goes in search of a missing twin and stumbles into a world of Nazi-inspired experiments and callous clinical cruelty in the quietly unsettling film Rabbit.

You’ll also have a chance to meet a sweet, small-town Canadian serial killer in Poor Agnes, whose approach to dating is somewhat…extreme.

There’s a chilling exploration of female self-image in the Regional Premiere of the icy, futuristic body-horror, Replace, co-written by cult auteur Richard Stanley, and featuring the legendary Barbara Crampton.

Last, but by no means least, the festival is exploring the traumas of post-natal depression in the bone-chilling Still/Born.

Festival and Day passes are available now and can be booked here.