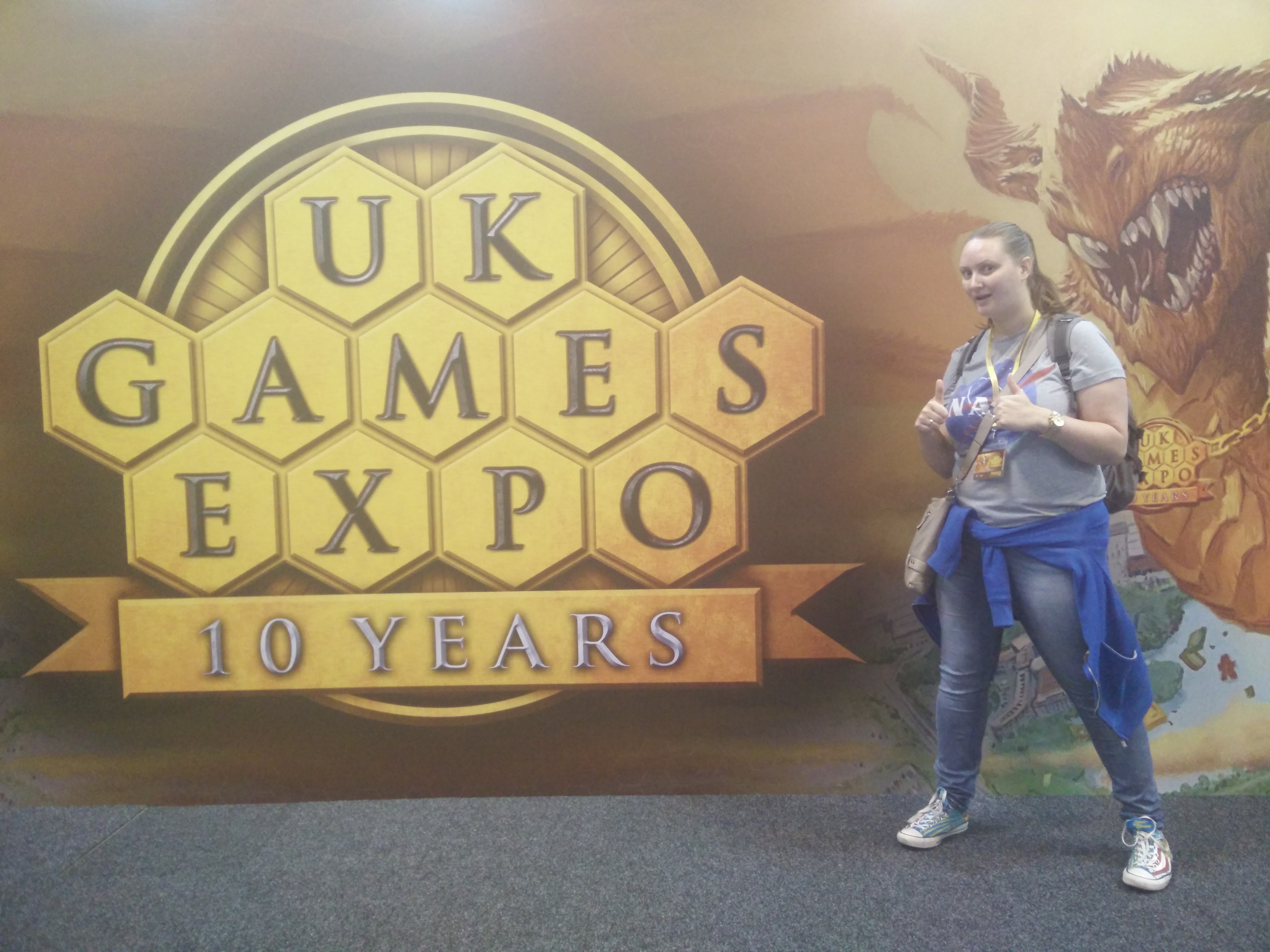 It’s been a few weeks since we left the 2016 UK Games Expo at the NEC in Birmingham. My only regret is that we couldn’t stay for the full weekend, a mistake we will surely rectify next year!

I’m not convinced that we got to see every game, but out of those that we did, here are our favourites!

Games we played, and loved

Since the 2016 UK Games Expo, In a Bind has swiftly become our go to game when people pop round to the house. It’s quick, fun, and takes seconds to understand the rules. The deck of cards contains simple instructions which must be followed for the duration of the game. Players take turns drawing cards and doing as they say. If at any point you fail to continue carrying out any instruction you have been given, you fail.

We love In a Bind, and it’s guaranteed to provide fun and laughter at all times.

Sneaky Cards is probably the game I am most excited by since leaving the 2016 UK Games Expo. I have a love of pervasive games. I am an avid player of Werewolf, and I enjoy geohashing and geocaching. Sneaky Cards is a new game that takes place in the real world. It is ongoing, and can affect the world around you.

You’re provided with a box of cards which are split into six types; 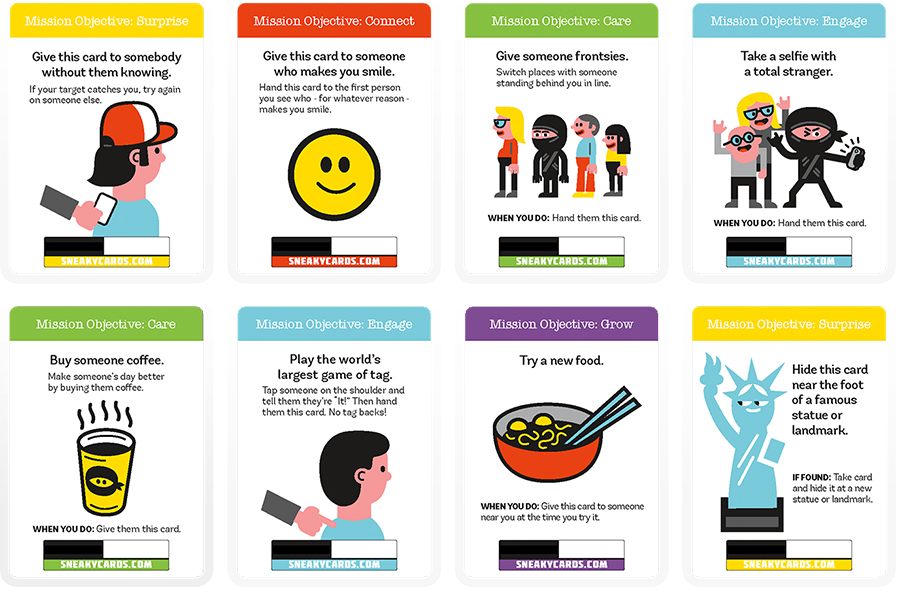 Once you have completed the task on a card, you are instructed to pass that card on. The aim being that the game is passed from person to person. So anyone presented with a card, should also complete the action, and then pass it on themselves. Forget paying it forward, this is playing it forward!

Each card features a unique tracking code, so when you register your deck, you can follow your cards as they travel from place to place.

I’ve seen a lot of hype about Ghostel during the kickstarter campaign, so I was keen to see the game in person at the 2016 UK Games Expo, and see if the game lived up to expectations. We managed to get a demo game in, and Ghostel is really fun!

The players are ghosts who haunt a hotel, but much to their dismay, people are coming to stay! It’s your job as a ghost to scare as many people out as you can. The more people you scare, the more points you get, and the ghost with most points wins.

We enjoyed this game, it’s a great new concept, and something a bit different. I do wonder if the order of play is a little biased towards the person who rolls the first highest score. Our highest initial roller starts the game, which in my opinion, makes them most likely to score the highest that round. At the end of each round, the new order of play starts with the highest scorer. As the ghost with the highest initial roll, each round saw me inch further and further ahead of the others. I do wonder if getting to go first every round made it too difficult for the other players to catch up.

I also thought the game finished too quickly, and would like to see this lengthened by adding more guests who can spend the night. With just three players, our entire game lasted only three rounds, and about 15 minutes. We were quite enjoying the game, and felt like we were just getting into it when it ended. Regardless, Ghostel was fun to play, and I think that with a few tweaks could be an amazing game.

Game of Blame is an interesting game of tactics and screwing over your mates. There’s a lot of ‘blame’ being thrown around, and it’s up to you to make sure that by the end of the game, you’re not the one responsible.

Players assume one of six roles, and cards are played to the blame pile each turn. If the colour of a card matches your role, that’s more blame for you going into that pile. If someone points the finger at you, and you have more blame than them, then all that blame goes to you.

The twist? Roles can change at any moment, so nothing is set in stone until that last card is played. You can go from feeling invincible to being left holding the blame in one swift move. At the end of the game, who will be the one holding most blame?

We really enjoyed playing Game of Blame at the 2016 UK Games Expo. It was especially fun playing with people we had never met before, and very quickly screwing each other over in order to try and win. If you like games of deception like Avalon or Resistance, you’ll love the Game of Blame.

Game of Blame is live on kickstarter now! 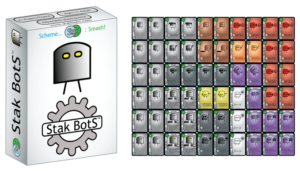 Stackbots is a great little battle card game. It’s quick and easy to play, and a lot of fun. You can be up and running in minutes, and there are plenty of game variations to shake things up and make games longer or more complicated. This means that the game has huge replayability, and if you do ever get bored, there are two expansion packs to add in tons more bots to your games! We managed to get our hands on a copy of the grey deck at the 2016 UK Games Expo, and we’ve enjoyed battling our bots ever since we got home.

The idea behind the game is to battle against other players with your ‘stack’ of bots. Each bot has different levels of strength and unique abilities. Once you start to battle with your bot, it keeps going until it can battle no more. Destroyed bots are replaced with the next bot in that player’s stack, but you have to be careful, as some bots have game changing effects that come into play when they’re revealed! It’s up to you to strategically combine cards and their effects to deliver the most damage. The last person standing wins!

In fact, the red expansion pack is currently on kickstarter, and you can become a backer and receive any deck from just £7.

If you’ve played and liked Codenames, then you’ll love Codenames Pictures! The game is pretty much exactly the same, except with a slightly smaller game grid, and instead of words, each card has a picture on it.

You work in teams of two, with one of your team knowing which cards belong to each team, and one of you completely clueless. The half of the team in the know, take it turns to give out one word clues which could represent any number of that team’s cards. It’s then up to your teammate to interpret that clue and select the correct cards. The first team to correctly select all their cards win!

The great thing about using pictures, instead of words in the original game, is that each card is open to so much more interpretation. While it might make it easier to find words that link multiple pictures, it also makes it more difficult to ensure those words can’t also be associated with cards that do not belong to your team.

Games we didn’t play, but really want to

Everyone knows I’m a sucker for a Zombie game, and Z War One looks rather exceptional. It has everything you would want for a post apocalyptic cooperative zombie game. A changing game board, well crafted miniatures, great characters and well structured game play.

What Z War One also has, is something extra. Z War One is an episodic tabletop game. Issued along with a comic book, which tells the story of your character’s survival, games are played alongside the comics, and help to evolve the story.

It’s a unique and brilliant addition to traditional game play, and even though we didn’t have chance to play a game at the 2016 UK Games Expo, it’s one we’re really hoping we’ll get the opportunity to play in the future.

The Hen Commandments is a fun game of chickens and religion. It’s the second clucking, a holy chicken is laying eggs with mysterious messages on them, and it’s up to you as a disciple of Henanism to decipher the hen commandments and become a Saint.

The Hen Commandments looks like it would make a great icebreaker or pub game for people who love to think creatively and have a bit of fun. 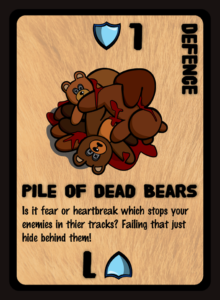 Lonely Bears was the most adorable and miserable card game we have seen in a long time. The aim of the game is to balance both an offensive and defensive strategy to allow your bears to defeat those of your opponent. The artwork is fantastic, and you’ll be sure to fall in love with these bears.

We didn’t have chance to demo one of these games at the expo, but we’ll certainly be keeping an eye out for the kickstarter, as this is one of the games that appealed to our more sinister sides on the day. 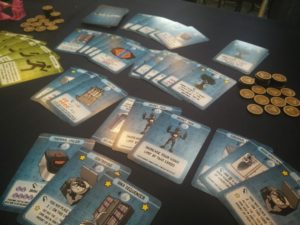 Designed by two scientists, much of the game is based on real life experiences. Each player commands a research team and works to grow their lab, while other players may be working to sabotage their efforts. Conduct experiments, and specialise in certain areas to get your team ahead. Come up with a breakthrough, and increase the scientific impact of your lab. The lab with the highest impact, wins!

Lab Wars can be backed on kickstarter now!

To this day I still claim that Labyrinth is my favourite film of all time, and it has been since I first saw it as a child. At the 2016 UK Games Expo we got a sneaky peak at the board game, and the figurines look amazing, even down to David Bowie’s immense crotch.