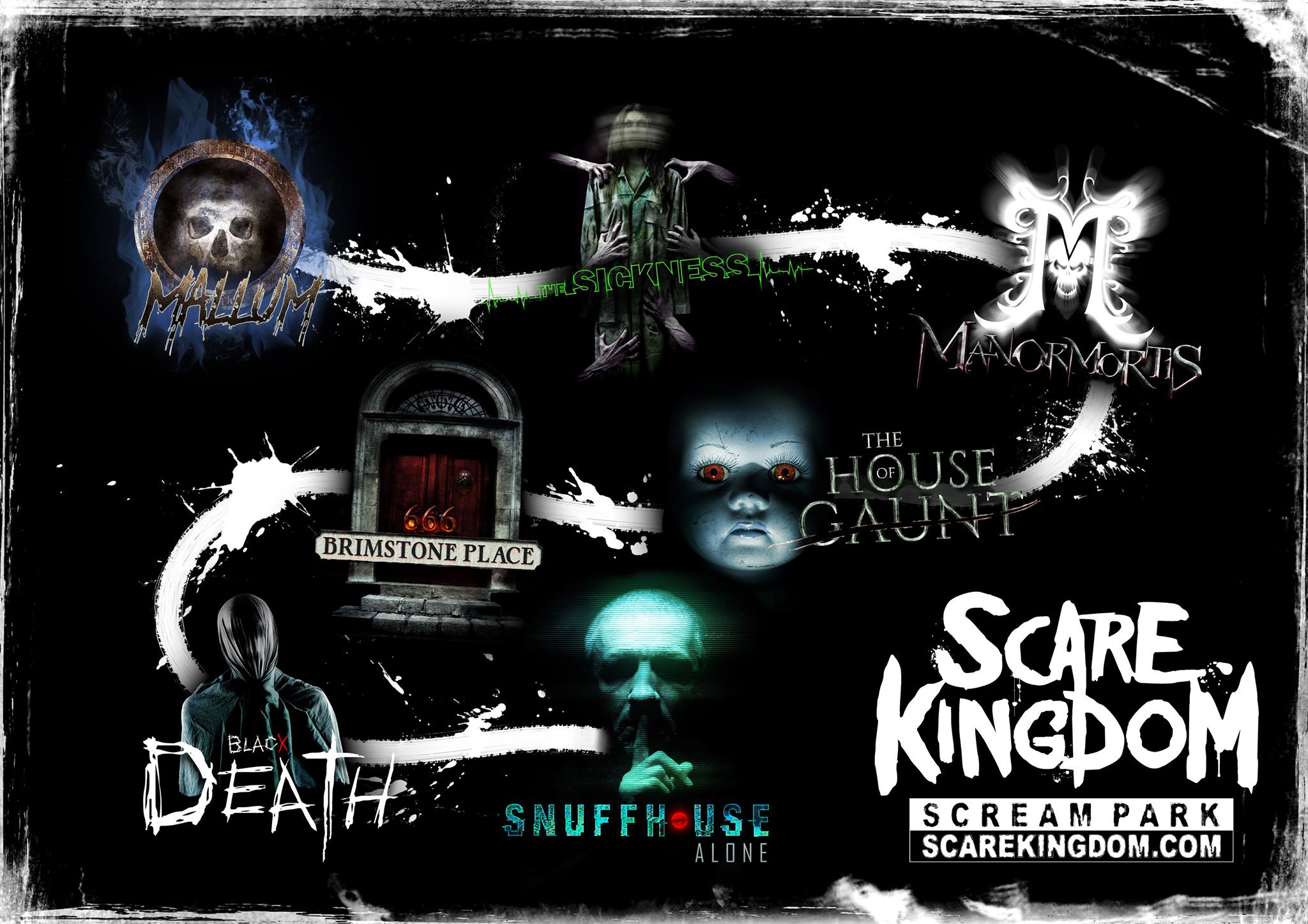 I think that this might be my fifth year running at Scare Kingdom, and every year I say it, but every year is true. This place just gets better and better. Scare Kingdom 2016 has a hefty offering. After Seven Deadly Sins in 2015, the park has maintained it’s seven attractions, more than any other park we know. 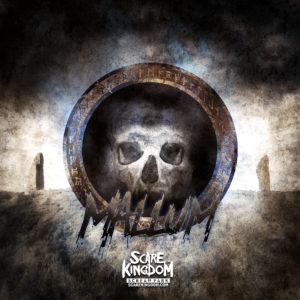 The first of the seven attractions is Mallam. Yes, not so much a maze but an introduction, but a performance nonetheless, and so we’ll allow it to be counted as an attraction in its own right. As usual we have come to expect a theatrical start to Scare Kingdom, and Mallam doesn’t disappoint. With dark undertones and a few scares thrown in to get us started, we were quickly turfed out into the night to wander the grounds and begin our frightful journey. 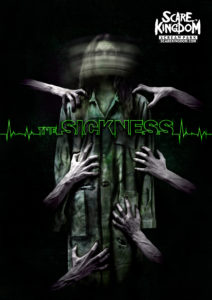 Next up is The Sickness. A hospital themed maze with traditional strobing effects to disorientate and confuse you. The Gnosis experiments is a quest to discover what happens to the soul after death, but the experiment has gone wrong, and you’re at risk of becoming infected! The Sickness is a traditional maze, with lots of jumps and scares throughout. We especially like (or should I say disliked) the moments of complete darkness, which changed up the pace and stopped us dead in our tracks whilst we tried to figure out what was about to happen. An excellent addition to Scare Kingdom 2016. 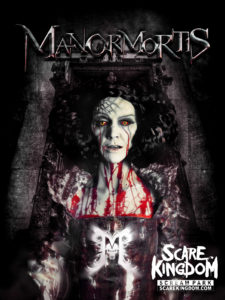 Our third attraction is the park’s static maze Manomortis. Interestingly, despite the maze’s unchanging interior or design, Scare Kingdom have still found ways to incorporate a new theme throughout, giving the maze a fresh feel. The way the house breaths has always disturbed me, and I must give a shout out to my old friend Kylie who plays Madame Zora, and was obviously made for Manomortis! There are a few moments in Manomortis where you’re not sure if something is a person or a prop, and the anticipation of whether a scare is coming or not (and then the lack thereof) is somehow more terrifying than constant scares. 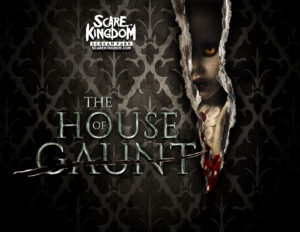 This logic is carried over to our next maze, The House of Gaunt. Not only are you unsure of where a scare may come from, but you can be left alone for multiple rooms, with no actor interaction at all. At first it can seem like the park has gotten lazy, or run out of actors, but in actual fact, it makes that scare all the better when it finally arrives. House of Gaunt was both my least and most favourite maze of Scare Kingdom 2016. I think dolls are really creepy, and if you’re the same, you’ll hate this maze too. 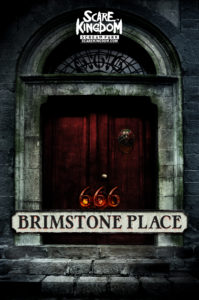 666 Brimstone Place is the penultimate maze for the main park. Another traditional scare maze, we enjoyed the rooms and the actors, but for some reason by the end of it this is the one that stood out the least. Except for that last bit, which was pretty awful. Just don’t look up…..

666 Brimstone Place might be the least memorable for Scare Park 2016, but it’s still good, which just goes to show how strong the park is overall this year. 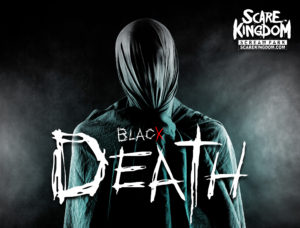 Last up is the Black Death, a very welcomed addition to Scare Kingdom 2016. A maze with a difference, where your senses are challenged and your nerve tested. Could you survive an entire maze while hooded? At one point I did wonder if we had left the maze and were slowly creeping out into the pub to be gawked at by those who had already survived, but thankfully not, although the pub is in sight when you finally escape. 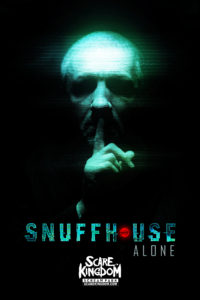 Most people might end their night here, but Scare Kingdom 2016 has one more attraction on offer, Snuffhouse Alone. Snuffhouse comes from the makers of Psychomanteum, faced with an intimidating sensory-deprived scare experienced, and ensuring no two experiences are the same, Snuffhouse takes the scare attraction concept to the extreme.

I took part in Psychomanteum in both 2014 and 2015, and although I enjoyed the experience, one thing that worries me is that in an effort to always push the boundaries, at what point does this scare attraction become not fun anymore. As we arrived at Snuffhouse, I decided that this was the point where I would no longer enjoy the experience, and instead, my brave fiance entered instead.

This time, I got to see the experience from the other side. Sneaking into the back of Snuffhouse, I watched on as the man I loved was tortured and tormented. It has to be the most heartbreaking thing to watch someone go through. It’s strange how seeing it as an observer puts the whole experience into perspective. You know that the tormentors are only actors, and that the bucket of sick contains only cold soup, but put into that moment, the experience becomes very different. During Horror Camp 2015, I almost gagged at strawberry yoghurt… 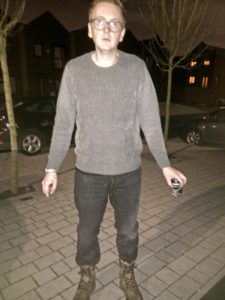 After completing the experience (which I’m impressed he did), Arran told me that he enjoyed the experience. At the time it might not have been too pleasant, and there were a couple of moments where he almost gave in, but in hindsight, he still found it enjoyable. After seeing it from the other side, I’m not sure I would have felt the same. Snuffhouse felt very different to me than Psychomanteum, and while it continues to push the boundaries of what you can put people through, I don’t think that this one will be for everyone.

I still stand by the fact that the actors in the extreme experiences are some of the best I’ve ever come across. At no point do you feel as though you will come to any physical harm, even though you’re being forcibly handled, and going through what can only be described as torture, I’m confident that you are ultimately safe in their hands. It’s also obvious how much effort Scare Kingdom have put into the attraction to make it unique. With a number of scenarios available, and only a selection taken each time, every person will truly get a unique experience.

Whilst I might have chickened out of Snuffhouse, it’s hats off to the Scare Kingdom team for still finding new ways to scare us each year. But does this make me even more nervous for 2017? Hell yes it does.