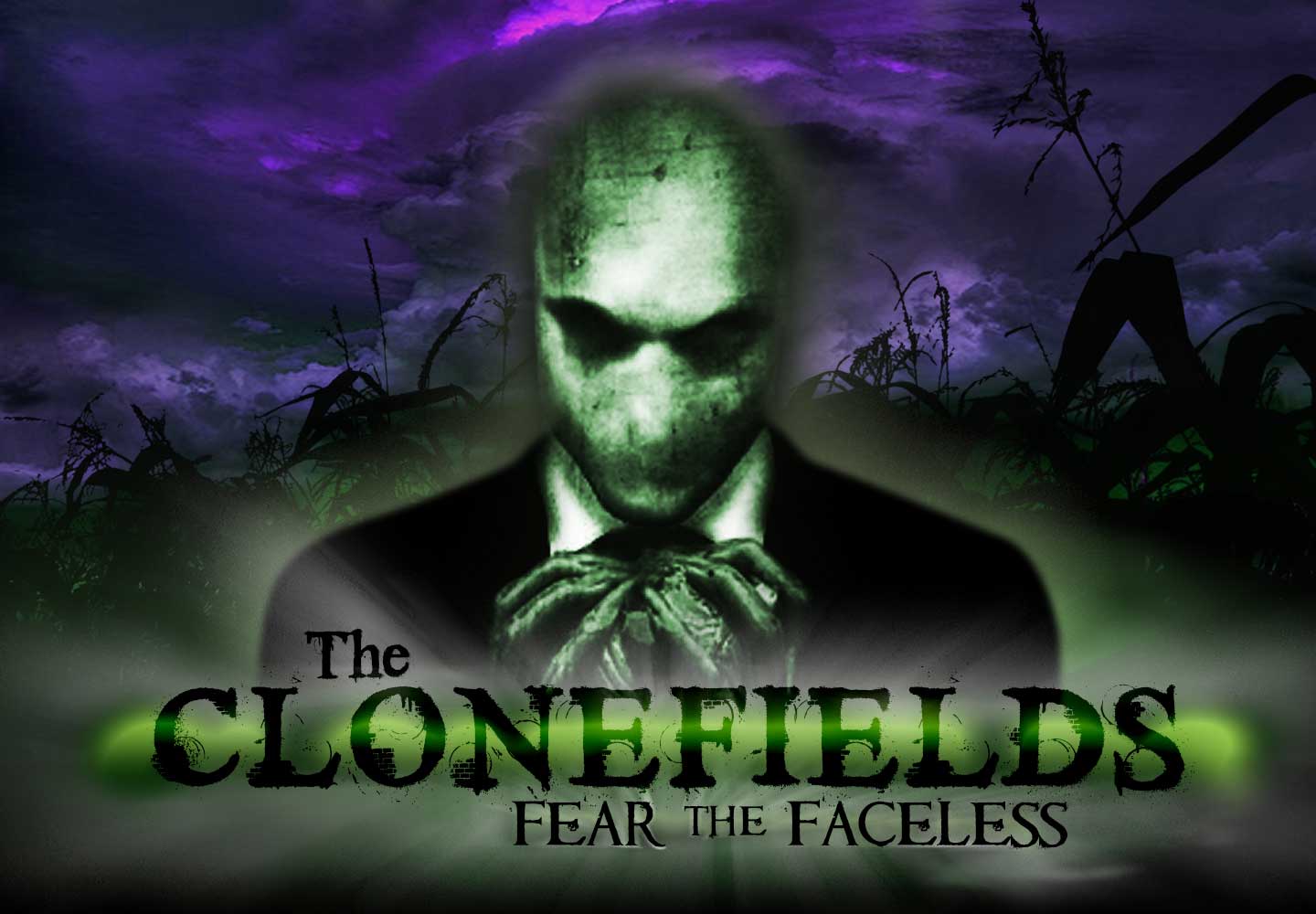 Whilst my experience at Scare Kingdom was complimentary, this review is my honest and unbiased opinion.

Although I have visited Scare Kingdom for the past 3 years, this is is the first time I have written up a review. Firstly, let me give you a brief history of my previous experiences at the park.

2012 – Good scare park with low production value, long boring walks in between mazes, the mazes were pretty good, some great actors, but the sets and production didn’t seem on par with parks such as Farmaggedon and Hallowscream. Also got really stuck in the mud, with having more outdoor mazes, you are certainly much more affected by the weather than productions with a bigger budget, who can afford full indoor mazes.

2013 – It looks like this year, AtmosFEAR has decided to up their game, branching out of just the Halloween Scare Park business they introduce Horror Camp Live, which after thoroughly enjoying, we were excited to see if the scare park had improved. We were right, the park has immensely benefited from the permanent installation of Manamortis, a high production value maze to rival Farmaggedon’s Terror on the Farm. The mazes were better, the sets were better, and the actors and their costumes were brilliant, especially in Cyber Scream Live.

Which brings us to 2014. Previously, I have always enjoyed Scare Kingdom, and I felt that it is definitely most improved, but this year, I feel the park has excelled itself, and I’m more excited right now about the future of this park than any other. One big thing that this park has achieved which I don’t think I appreciated in the previous two years was the fact that this park always brings us something new. As good as Farmaggedon is, it’s the same thing year after year, and it’s not enough for me any more. Scare Kingdom brings us fresh ideas, not just each Halloween, but throughout the year, and that is an amazing feat that cannot be overlooked. 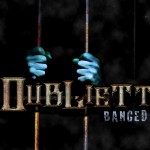 This year starts with The Oubliette, which yes, despite what I have just said, is the same way that last year started, but it’s just the intro, so we can forgive them for that. Once out into the main attraction I wasn’t sure what to expect. It’s unfortunate that they haven’t yet found a way to break up the long walk to the first maze. I know the site is a working farm during the day, but it would be nice to try and hide the quaint farm walk with more horror & scares, as it does give you a drop in atmosphere. They do scatter around actors to keep you on your toes, and as ever Scare Kingdom has always had a high quality of scare actor, including the return of Abraham Cleaver, a favourite of mine from Horror Camp, (no Incesta though which was a shame). 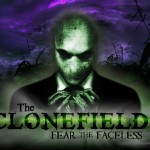 The first maze, The Clonefields, was probably my favourite. Slender Man is a personal favourite scary story of mine, and the concept was very well executed in the depths of the corn maze. Brilliantly creepy, my only criticism is that Slender to me should be silent, and the actors who jumped out on us while making a noise just didn’t quite seem right, I think the character and setting are much more frightening when you can’t hear them. I even managed to get this quick shot, can you see the Slender Man stalking us in the background? 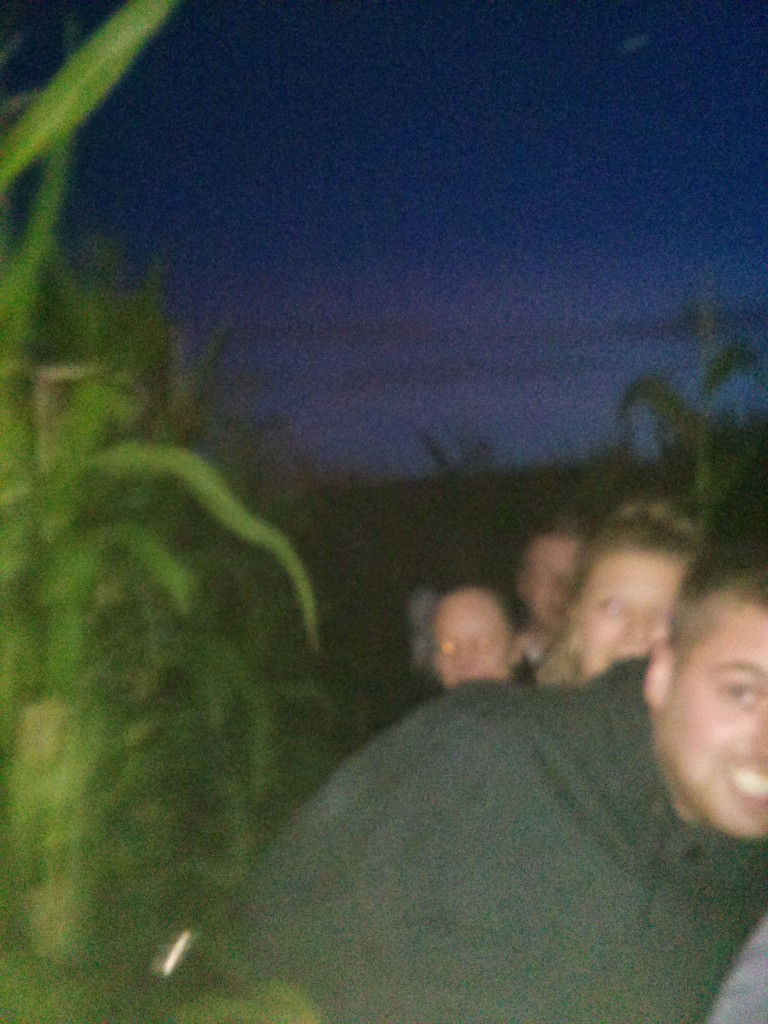 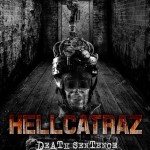 Once out of the Clonefields there is another slightly tedious walk to the next maze, but then Hellcatraz and Manamorits are pretty much one after each other. Hellcatraz was fun, using lots of strobe effects to disorientate you as you make your way past the crazy inmates. There is a nice break in the middle of the maze where you are separated for the final run, which was a really nice touch. 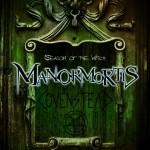 Manamortis is the only one that was very similar to last year, but with a permanent structure, I can imagine it would be more difficult to change up. The actors again were great, and I love the claustrophobia tunnel which is a great effect not so commonly seen. There is a hint of a gravity room, but I think this could be improved and the effect used to it’s full potential in the future. One thing to take note of however is that this maze is super dark, so prepare to get friendly with the people in front and behind you, as you’ll need to hold on to make sure you don’t get left behind! After Manomortis is a less tedious walk to the Human Zoo, which was probably, if I had to pick one, my least favourite maze. There seemed to be longer periods without any actors, but the sets were very good, and this maze made good use of having you duck down and not just walk through without having to negotiate changes in ceiling height.

After The Human Zoo you have the opportunity to head to the bar for a swift pint and some hot food to calm your nerves. Or, you can decide to continue the terror and enter Pysychomateum, dubbed by The Sun as the “sickest attraction in Britain“. 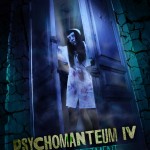 To be honest I’m a bit miffed that it has taken me so long to experience Psychomanteum. Last year I forgot to bring extra cash, and I completely missed the Christmas and Valentines attractions (where I think this was also available), but I am ever so glad that I have finally done it. Reading the disclaimer was slightly remeniscent of Horror Camp Live, and I remembered how good Scare Kingdom was at looking for other ways to scare you, without always relying on dark places and actors jumping out at you, (think the clown taking away to a room on your own). And for people who slam this attraction as being inappropriate, degrading and humiliating, well then just don’t go in! I find it ridiculous that people can get so upset about something you have to choose to participate in, and even pay for the privilege. I would assume that someone who would not enjoy this attraction, would realise this while reading clauses in the waiver such as “I will be touched, grabbed and forcibly moved”, and that “I understand that Psychomanteum is graphically disgusting, offensive, sexually explicit, crude, vulgar and extremely adult in nature”. Surely anything that requires a safeword is not to be taken lightly, and personally, I think anyone who then proceeds to hand over a fiver and then complain about it is a complete idiot. In line with the disclaimer I will not discuss what happened to me inside, I will however say that both myself and my boyfriend went through, and we both had slightly different experiences, which was nice. I would also like to commend the three main actors, who were absolutely brilliant, and probably the best scare actors I have seen. Psychomanteum dances just on the right side of a fine line, which is not something that is easy to do. The man handling is perfectly executed, being likened to light bondage but combined with hardcore smut, although I was scared of what was going to happen, I was never fearful of being actually harmed. I think that Scare Kingdom have really hit the nail on the head with their execution of this attraction, and I’m thoroughly impressed.

Not only would I recommend all aspects of Scare Kingdom to people, but I think that this is the attraction that has me most excited and wanting to return. The fresh ideas each year are a breath of fresh air among the more stagnant parks, and each year the production values improve immensely. In a way, although I did criticise the long walks and the lower production outdoor mazes, it is here where the park has the most potential to grow. These mazes lend themselves so well to change, I would much rather have something fresh and new than a bunch of expensive permanent structures that never change. By combining the high production Manamortis with the lower production changing mazes Scare Kingdom has a great balance, and if they can find a way to improve those walks between mazes, this could be by far the best park I have ever been to.