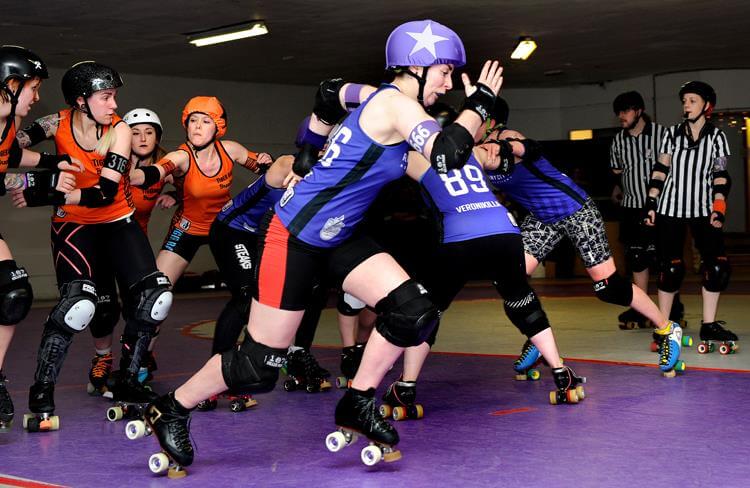 The latest opportunity to come my way was to head over to Oldham and watch a Rainy City roller derby match, before joining them for a new skaters session, so I could give roller derby a go myself.

So, on Saturday 15th October, I popped over to the Thunderdome to see what all the fuss was about. I’d watched some of a roller derby match a few years ago, but only for a short time, and I didn’t quite understand what was going on. This time, I started off in pretty much the same way.

I don’t think roller derby can be likened to any other sport, and more unusual, it’s full contact, and heavily dominated by all female teams.

Roller derby is a contact sport played by two teams of five members roller skating in the same direction around a track. Game play consists of a series of short match ups (jams) in which both teams designate a jammer who scores points by lapping members of the opposing team. The teams attempt to hinder the opposing jammer while assisting their own jammer – in effect, playing both offense and defense simultaneously.

Once you get the jist of what’s going on, roller derby becomes very entertaining, and violent, to watch!

I doubt that many newcomers will actually be able to follow everything that’s going on. For starters, it takes about 5 skating and 3 non skating officials to keep track of the match, so one novice bystander hardly stands a chance. All I know is that a lot of players got sent to the penalty box, so much so that it was rare at the start of the match for both teams to start a jam with a full squad.

I even got treated to a front row view of just how brutal the game came can be when Rainy City Team Captain Rampant Ratchett went down hard and the jam had to be stopped. Despite the blood, she was soon back up and cheering on her team.

On this occasion, the Dublin Roller Derby C-Lions got the best off Rainy City Roller Derby’s Bet Lynch Mob. It was a fast a furious game, and made me very nervous for the new skater session the following Monday…