I had a bit of a weird time when I first found out that I was pregnant, and as it turned out, I wasn’t the only one. So I’m writing this post just in case there are other women out there going through the same feelings, to let you know you’re not alone, and it’s normal. Well, most people do say I’m not normal with most things but at least you’re not alone…

Most people suffer from impostor syndrome at some point in their lives, especially women. That feeling you get when you doubt your accomplishment and fear of being outed as a fraud? Well, I spent 2 months of being pregnant worried that I wasn’t, and at some point, I was going to be exposed as lying. I call this, pregnancy impostor syndrome.

We’d been trying for a while to get pregnant, so a few months before I’d stopped tracking everything. I didn’t want my life to revolve around an app telling me when I was ovulating, especially as I was sick to death of peeing on ovulation sticks that constantly came out negative, despite a blood test confirming that ovulation was definitely happening at some point!

I remember sitting on the sofa watching TV, and suddenly realising that it felt like ages since my last period. I checked the app, as I still used this to track menstruation, and it immediately showed me as 10 days overdue. I checked the dates of my last period and manually counted how long it had been. I counted 31 days, and I remember thinking to myself that this is just 3 days overdue on a 28-day cycle, and almost ignored it. That was until I remembered that a 28-day cycle INCLUDES my period and I really was 10 days overdue!

Next step was to pee on some more sticks. I peed on two, from different brands. There was no need to wait 10 minutes for results, each one immediately displayed two blue lines. Despite this, I spent time studying the instructions to make sure I was reading it right. Had a shower. Peed on another stick just to make sure I was still pregnant, and I was. 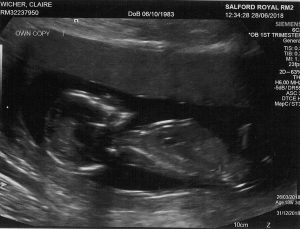 After reading the instructions one more time, and Googling chances of false positive on pregnancy tests I was ready to tell my husband. We celebrated, and I booked an appointment for the next day with my doctor to confirm everything.

The next day my doctor congratulated me and booked my first midwife appointment. But that was pretty much it. I asked her if she needed me to pee on something, and she said no. Apparently, home tests are just as accurate as the ones they use, if not actually the same thing, and so there’s no need anymore. If my test(s) said I was pregnant, then I was pregnant.

I couldn’t help but think on the way home that there was still a chance I’d read the results wrong (three times) and made a mistake, and couldn’t understand why a medical professional would take my word for something over checking it themselves. Either way, I had my first midwife appointment in a few weeks and figured they would check then. I still had the fact that I was almost two weeks late for my period so I was pretty positive that I was definitely pregnant, but still, it would be nice if someone trustworthy confirmed it too.

After a few weeks, I had my first midwife appointment. I think it’s worth mentioning that by this point I had experienced very little in the way of pregnancy symptoms. No sickness, just feeling super tired, and to be honest, people might just think I’m lazy. Nothing about me screamed I’m pregnant, and I didn’t feel different either. 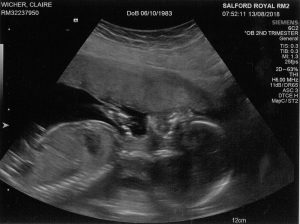 The first midwife appointment turned out to just be a ton of paperwork, and they still didn’t make me pee on anything! By this point, I was getting super paranoid. I have a form to send off for free prescriptions that last until 1 year after my due date, and there’s still no proof I’m even pregnant. So now I’m torn between panicking that I’m accidentally lying to everyone if it turns out I’m not actually pregnant and wondering why more people don’t actually lie about being pregnant just to get free prescriptions, because apparently, no one checks anymore…

I now have to wait another month for my first scan, so just in case, I peed on another stick. Still pregnant. At least, according to my home pregnancy test that I’m doubting I’m doing right in the first place because no one else seems bothered about making sure I’m not lying. I mean it’s still been over two months and I’ve not had a period but is it too much to ask for someone who is more qualified than me to check these things?

I hated the day of my first scan. For someone who pees 20 times a day normally, drinking two pints of water and holding it for two hours is not the best way to put me in a good mood. Did I mention there are speed bumps outside my house? I basically arrived at hospital pissed off, uncomfortable, and still panicking that they were going to put that thing on me and get all confused because there’s no baby in there. I’m now 12 weeks, and I have a very small bump, haven’t had a period in 3 months, and I’m STILL not convinced I’m actually pregnant. To make it worse we’ve told our parents now, so I’m going to look well stupid if it turns out I’ve got it wrong. I’m wondering if I should have peed on another stick before I came, but I then I get upset thinking about peeing when I’m desperate and can’t go.

We got called in, and I laid on the bed while the sonographer poured cold lube on me and fired up the machine. She put the thingy on my belly, and right there on the screen was a baby. 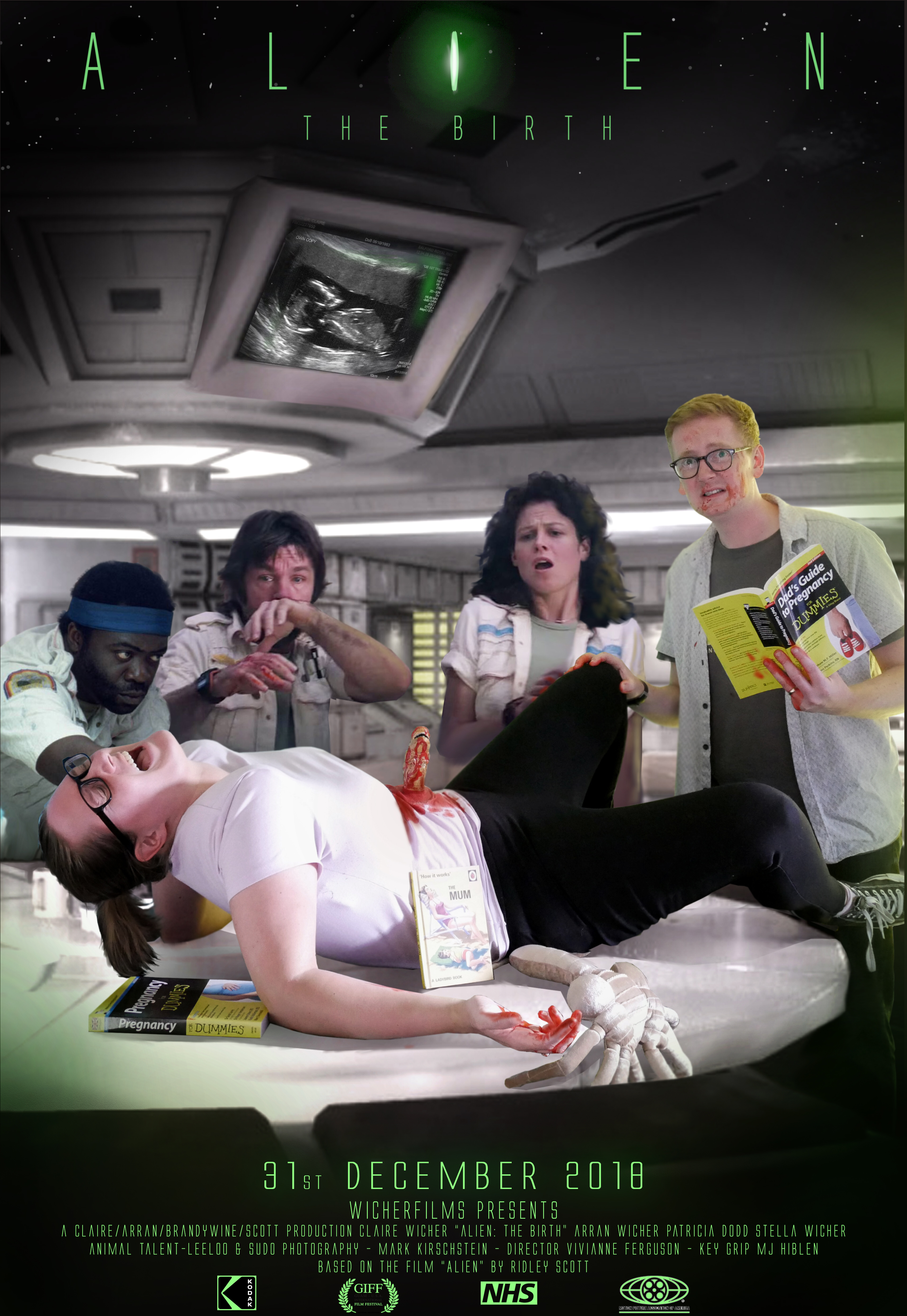 You know when they do this on TV and suddenly everyone starts crying and getting all emotional because they see their baby for the first time? All I could think of was thank god I’m not lying and how much I still needed to pee.

Weirdly, even after the scan, I didn’t ‘feel pregnant’. I’m pretty sure people keep thinking there’s something wrong with me. Other people are getting all excited and gushing about the baby. My midwife checks the heartbeat everytime I go and pulls that weird face at me when we hear it like she’s waiting for me to start crying and gushing over it with her. In reality, I’m just wondering why she’s staring at me all weird and waiting for the appointment to be over because I’m super busy and hate having to go to the doctors all the time all of a sudden.

At the time of writing this, I’m 22+ weeks gone. I’ve had two scans, and now I can feel the baby moving, although no one else can just yet. We know it’s a little girl, and we loved putting together our Alien inspired pregnancy announcement and Star Wars themed gender reveal.

The good thing is, I’m now 99% sure I’m definitely pregnant, (1% of me thinks it’s not clever to completely dismiss the possibility of being infected with an alien parasite). 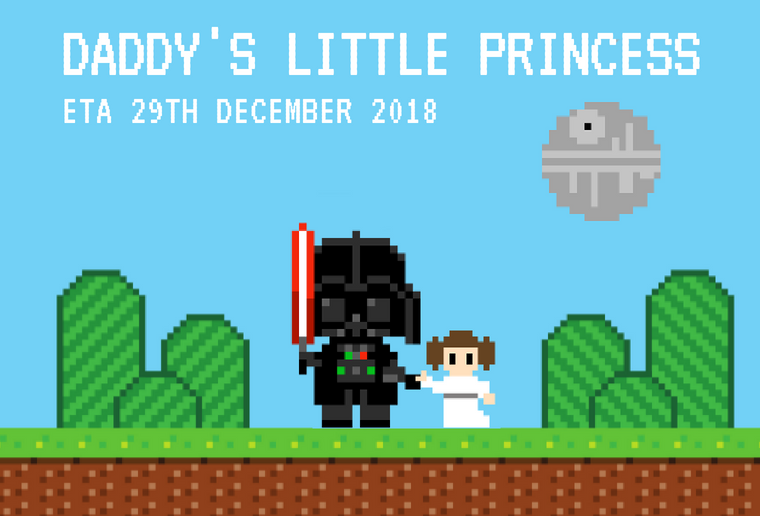