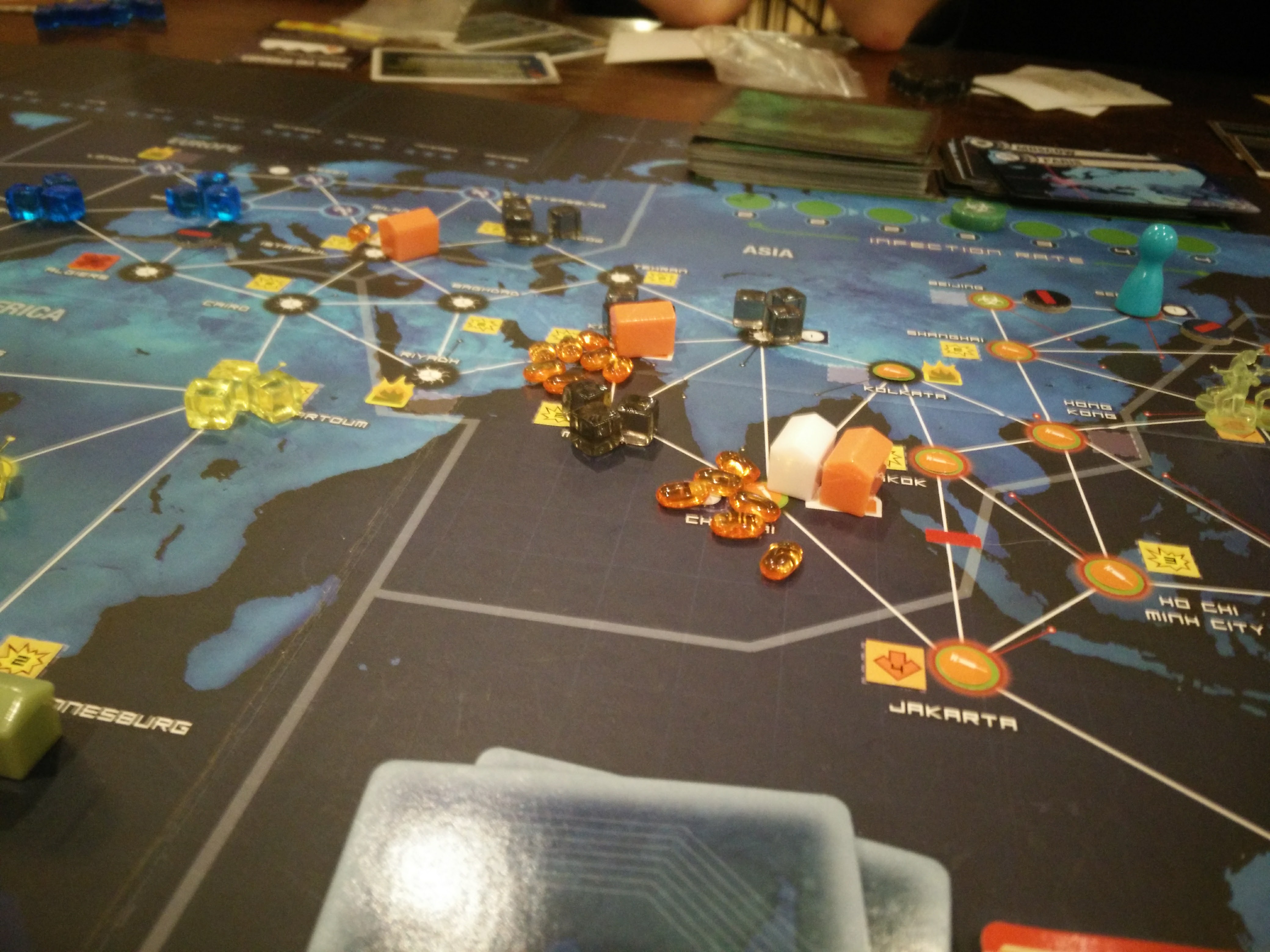 It’s actually been a while now since we completed Pandemic Legacy, but I’ve been a bit too traumatised to write about it until now. It’s been a hell of a journey, and disappointingly, we didn’t do quite as well as I thought we had. I was also a little disappointed with how it all ended. After almost 12 months of real time game play, I expected something a little more…. grand? Would it have been too much to have a brass band waiting outside our door? I mean, after all, we did kind of save the World.

In order to effectively search for Patient Zero, we needed to build a Military Base on City Zero, so we brought the Ops Specialist back into play. We also figured he could build more bases for us to easily sabotage!

With a very early epidemic, we chose to roadblock Osaka (City Zero) to prevent it from getting infected while we needed to search. The Ops Specialist flies in direct and builds a research station, followed by the Researcher who places a quarantine to protect our search party.

With a lucky draw of cards we quickly have the cure for yellow in sight, but this is also followed by our second epidemic. Not long later we also see the cure for blue, but we’re very short on red cards which we need to continue the search. After a third epidemic card, we’re having real difficulty completing this search. We cure blue, and work out how to complete the search, we just hope another epidemic isn’t drawn!

We also begin to quarantine faded cities as a back-up objective to complete, when Patient Zero is found. This find gives the Immunologist all the items they need, and we gain the ability to travel from Research Stations to Vaccine Factories.

We also have new scars, new game end upgrades, new medical equipment and the Immunologist, who we make rivals with the Dispatcher.

As we work towards vaccinating the faded cities, we wonder if our final task will be to clear the board? With all these changes, we’re no longer confident we can win this month, but we come up with a plan to sabotage two military bases. As soon as we blow up the base in LA, we draw another epidemic. We just need to cure black, and do so without going over four more outbreaks.

The Dispatcher takes a scar to miss the infect cities stage, and a well placed remote quarantine protects us from an outbreak the following turn. Just before we cure black, we even manage to build a sneaky Vaccine Factory in Karachi. 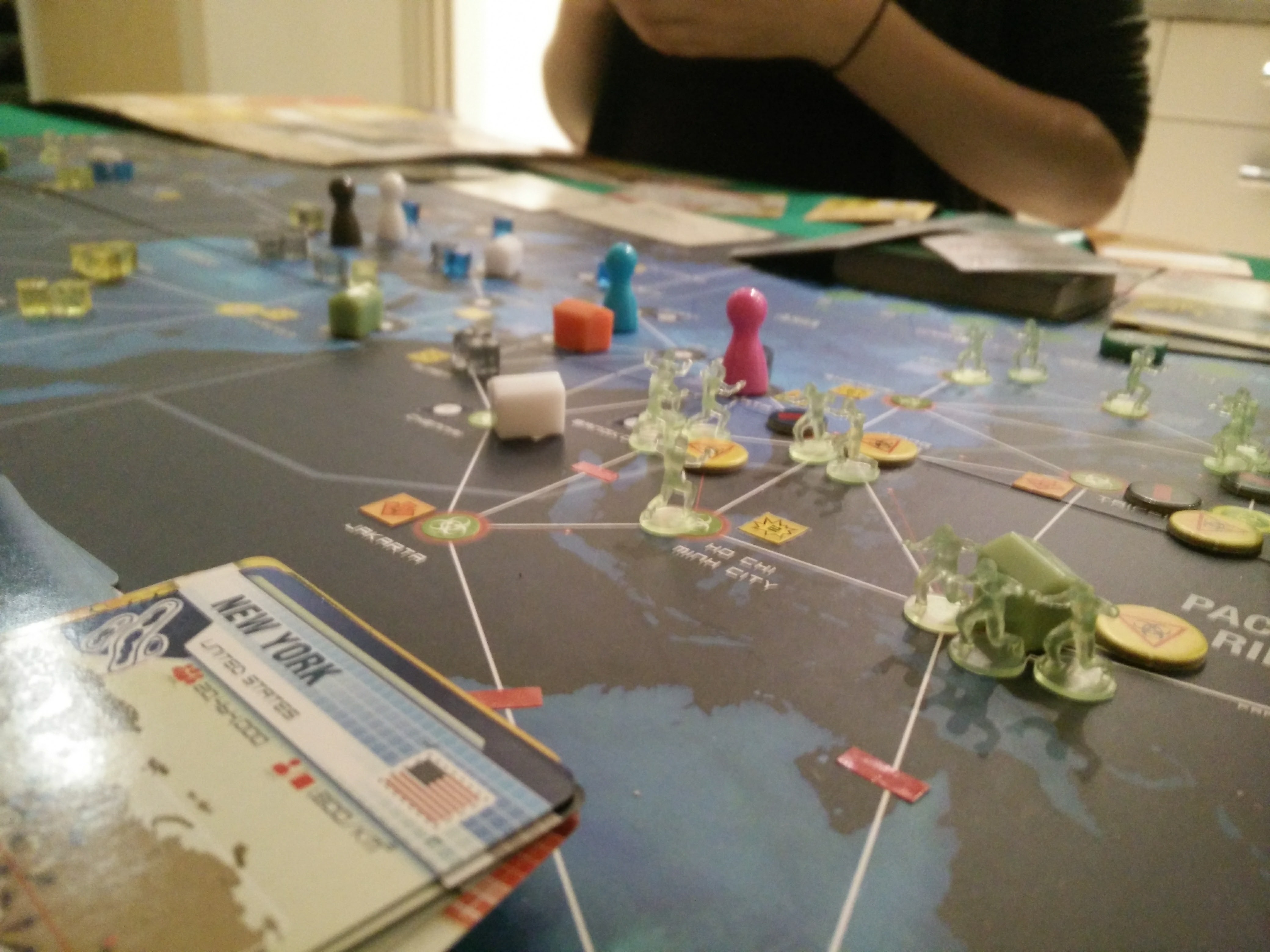 After a bit of debating we came to the conclusion that vaccinated cities will not receive faded figures ever again, and we made a start on November’s objectives. We had a couple of outbreaks early on, but we eradicated Blue very quickly. Our next debate was on whether to prioritise vaccinations or cures…

We start to collect vaccinations and risk going for it, and with three factories built we only have one more objective to make a decision on. We decide to sabotage two more military bases, which would also make vaccinations easier, but some chain reactions put us in a really bad position.

Less than three rounds in we’ve already had five outbreaks, so we move to damage control and try to vaccinate as many cities as possible. We have one last ditch attempt at winning the month, we continue vaccinating cities and cure yellow, but we have no plan for curing black.

While we survive a third epidemic, the next one causes two chain reactions and it’s game over