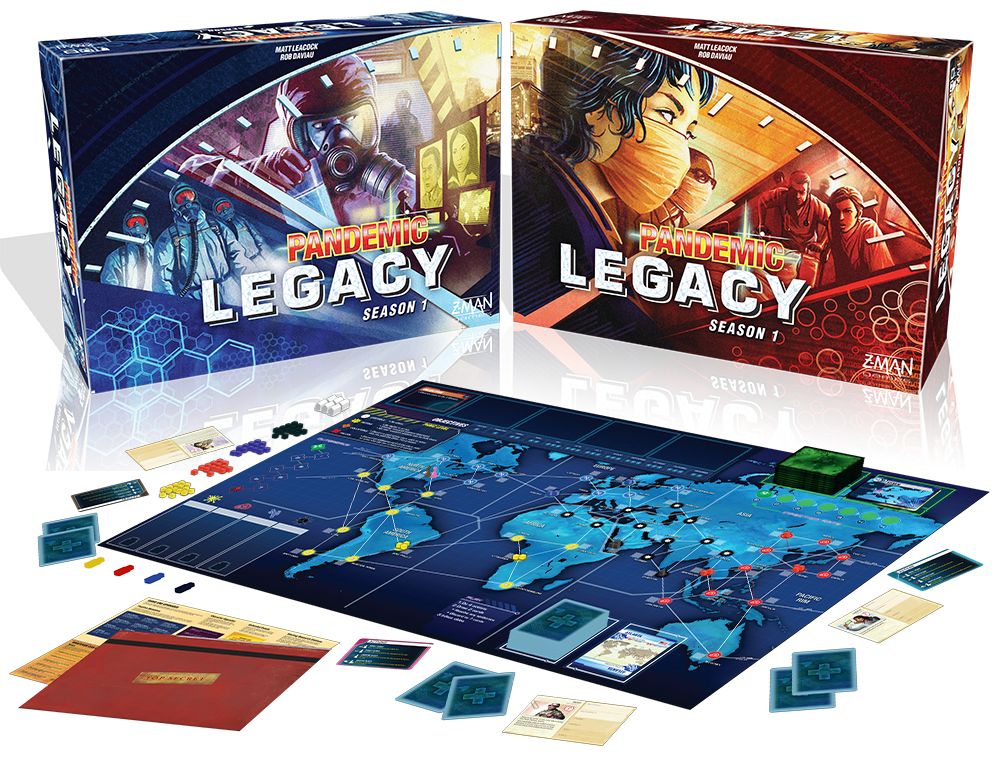 We have finally got around to playing Pandemic Legacy. With our team assembled and plans to meet up and play once a month, we’re excited to see what the latest instalment that the Pandemic world has to offer.

The world is on the brink of disaster. In Pandemic Legacy, your disease- fighting team must keep four deadly diseases at bay for a whole year. Each month will bring new surprises, and your actions in each game will have repercussions on the next. Will you let cities fall to the diseases? Will your team be enough to keep the viruses at bay for a whole year? Craft your own unique Pandemic experience with Pandemic Legacy.

Pandemic Legacy brings us a whole new way of playing board games. Gone are the days where you can bring out your favourite game time after time, you become familiar with the rules and unsuccessful campaigns can be put aside and redone at a later date.

Pandemic Legacy is a one time deal. An overall story arc takes you through 12 – 24 games. The result of each game has permanent effects on future games are played, and each group’s overall experience will be unique. There are no do-overs, mistakes can cost you dearly, and you cannot plan for what is to come. Rules change, objectives change, cards are ripped up and written on, and events in each game have consequences for games to come.

Pandemic Legacy has turned the world of board gaming as we know it upside down, and I love it!

The first month in Pandemic Legacy appears to be somewhat of a starter month. Incredibly similar to a game of standard Pandemic, January seems to provide an introduction into the slight differences in overall game play. Imagine a standard Pandemic game, and introduce event cards (similar to those in Pandemic The Cure), and panic levels in cities which have experienced an outbreak, and you have yourselves the January game of Pandemic Legacy.

It’s a nice way to slowly introduce new concepts to an already relatively complex game, which I think is a very good idea. Event cards, when drawn, can be played to give the team extra help. The number of event cards available to you each month, depends on how well you have been doing. If you’re doing well, the number of available cards reduced, but if you start to struggle, the number of available cards goes up. This is an interesting balancing game mechanic for Pandemic Legacy. Whilst one would expect to be rewarded for doing well, the event cards are instead used to challenge or assist, only when required. This is also good for teams who may end up struggling, as there’s no point making things harder when you’re already having difficulties. This is a game to be played over a long period of time, and you want struggling teams to have hope that they can come back from defeat.

Panic levels are something that you need to be very aware of from the start. Once a city experiences an outbreak, it’s panic level rises, and there’s only so far it can go before the city is lost. These consequences are not reset at the end of each game month, but are retained for the entire duration of the game. You may not be too bothered about a few panic levels in month one, but with the potential to be playing up to 24 games in total, you’ll be wanting to aim towards preventing every single outbreak. The consequences for panic levels are pretty serious for game strategy;

We spent some time setting up the first game, as there’s a lot in the box that looks very intriguing. Included in the box are five Dossiers and eight Packages. Neither of which are used in month one. We’re also introduced to the Legacy deck, which in month one provided us with our game objective, but nothing else. We’re sure that future months will include additional cards, but at this point we’re not entirely sure what they will do. 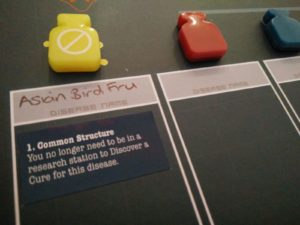 I think that as we have all played Pandemic before, and we’re also used to playing cooperative games, that we managed January quite easily. I enjoyed the slow introduction to new aspects of game play, and I’m excited to see more of the new features, such as the what else the Legacy deck has in store for us, and what’s contained in the Dossiers and Packages. I’m hoping that at least one new feature is revealed during month two, and I’m under no illusion that this will likely be our last ‘easy’ game of the series.