Last year I was invited to join an enrichment programme from the MMU Edulab, an organisation working to create innovative educational experiences. The project was called The Oubliette and aims to develop a maths-based escape room exhibition to engage with young people.

This project will construct a maths-based attraction inspired by rise in popularity of attractions like escape rooms and the Crystal Maze. Once constructed, participants will engage with eight rooms, each containing interactive puzzles and challenges drawing on mathematical principles – which they will need to solve collaboratively, and using their whole bodies. The experience will be wrapped in an overarching story and a set of game mechanics which will motivate and encourage persistence.

The challenge to create rooms with differentiable challenges, inspired by maths-based puzzles, which contribute to the overall narrative. Not an easy task!

I wanted to begin by investigating what sort of puzzles would help promote maths as a collaborative, experimental and fun activity, using gamification as a motivator. Many of the ideas I had were taking simple maths-based puzzles and applying them to something tangible.

Place a remote control car in a maze with something on top that you need. Your team must find a way to guide the robot through the maze to your position, where the object it holds can be accessed. 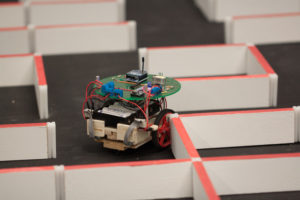 This idea isn’t anything new, but there are ways of implementing it that require more thought that controlling the robot via a remote control. Requiring the robot to be pre-programmed with the complete steps to solve the maze before commencing adds a layer of complexity that is easily differentiated. Primary school children can complete programming puzzles using drag-and-drop blocks and a simple maze. Mazes can be swapped out to require more steps to be taken, and programming languages can be changes for adult audiences. For more advanced groups, a restricted set of commands could be provided that only work when put in the correct order.

This can be used as part of a puzzle to solve, with the item being obtained potentially being a crucial aspect of an additional, puzzle. Alternatively, the item could be something as simple as the key to unlock the room.

Counting mazes are grids of numbers with a specific start and end point. You must find your way from the start to the end moving through adjacent boxes, but only when the jump in numbers matches your given number. For example, counting by 5 means that when in a box with the number 20, you can only move to a box with the number 25 (or 15 if you allow negative jumps). 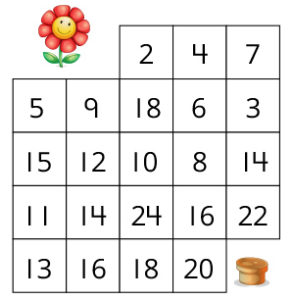 Take a giant counting maze and place it on the floor of the room, and watch your players physically move from one end to the other. Using pressure pads can help illuminate the path and let you know when a mistake is made. Make it an additional challenge to find the correct jump number, and increase complexity for experts by having a jump number that is variable, eg. the Fibonacci sequence.

Add a teamwork element by blindfolding the player on the maze, and requiring the rest of the team to communicate the correct path to them (think Knightmare). Once the maze has been completed, the player may be rewarded with access to the next room, a crucial piece of an additional puzzle, or provide access to the rest of the room for the remaining team members.

The iconic scene at the start of Indiana Jones Raiders of the Lost Ark sees Indy steal the golden idol by swapping it out for a bag of sand that weighed the same amount.

A weight calculation of varying difficulty could be used to obtain an object required for escape. In keeping with the Indiana Jones theme perhaps this could be a key object in constructing some kind of Rube Golberg machine that releases the locked door, in lieu of booby traps, which might be against our H&S regulations to install.

A solid dissection puzzle where pieces can be combined to make a cube or a number of other 3D shapes. There are 240 distinct solutions for the Soma Cube puzzle. 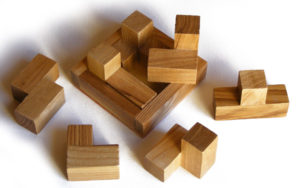 Creating large Soma Cube pieces provides a physical problem-solving puzzle. Players can be asked to put the pieces together to form a cube or a number of other pre-determined shapes. Additional complexity can be added by asking players to solve an initial puzzle which would reveal the correct shape to make, or using a Bedlam or Diabolical Cube to provide more pieces to contend with.

You could also potentially use NFC connectors in the pieces to give visual clues when they are combined in the correct order.

A tile-based abstract game requiring four coloured lines to be matched up correctly. Each tile contains only lines of two colours and no two tiles are the same. 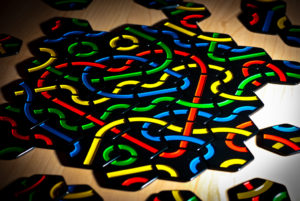 This is another problem-solving puzzle which can easily be differentiated. Puzzles can be solved with physical pieces or online.

Complexity can be changed by increasing or decreasing the size of the puzzle, adding or removing coloured lines, providing starting pieces to scaffold learning for lower abilities, or even looking to develop a 3-dimensional version of the puzzle.

Another possibility would be to require the pieces to bridge a gap between one side of the room and another, with conductive material running along one strip. Only by putting the puzzle together correctly would complete the circuit and release the door to the next room.

Inspired by the game Set! A deck of 81 cards varying in four features; number, symbol, shading and colour. The aim is for players to identify a set of three cards from the available nine in a grid. A Set consists of three cards where each of the four varying features is either the same or different. 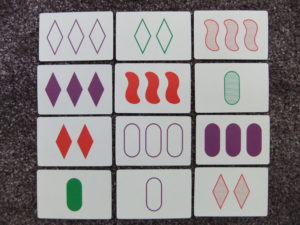 A wall of tablets displaying the grid could provide the opportunity for players to physically interact with the cards to indicate a set has been found.

Placing the tablets far apart can add the element of teamwork. Teams might be asked to find a specific number of sets in order to escape or to reveal a clue for another puzzle.

Alternatively, it might be possible that teams are required to find a specific set, with clues for what combination of features is required being obtained via other puzzle-solving activities.

With a wealth of maths-based puzzles available to take inspiration from the real challenge appears to come from taking these and adapting them to be differentiable, while making them fun and engaging for the whole team. Despite these challenges, I think we should be off to a good start, and I’m looking forward to our next planning session!