I don’t think it’s any secret now that I’m quite addicted to the T.I.M.E Stories games. I completely adore the concept, so I couldn’t wait to get stuck into the first of the two new expected releases. Lumen Fidei. The fifth T.I.M.E Stories expansion sees you travel back to Reconquista Spain in 1419.

Spain is still divided by religious conflict between the Christians and the Moors, but in the midst of this conflict, a supernatural power is rising, tied to an unnatural stone. Your mission is to travel back to Spain, recover the stone, and return it safely to the T.I.M.E Agency. Enemy agents have been sighted in the time stream as well, so you’ll need all your wits about you as you travel back to medieval Spain! 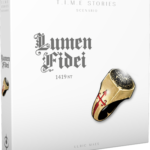 This expansion is played in three chapters. Slightly differently to previous scenarios, once you progress to another chapter, should you fail in your mission, you restart from the beginning of your current chapter and do not return to the start. The ITD device from Under the Mask is gone, and instead, you’re back to acquiring companions as you progress through the story.

This scenario, however, does include an interesting new feature. Your receptacles and your choices have religious consequences throughout the game. You begin with a level of faith, and this can change depending on the choices you make. Losing faith can give your team advantages, but could also have other impacts on progress or limit the choices you can make.

The introduction of a moral dilemma in the game is an interesting twist and makes decision making more complex. Although our decisions in previous scenarios have also had consequences, this provides another level to keep in mind. I also liked the splitting of the scenario into three chapters. Each section has a different feel and slightly different gameplay, which keeps things interesting along the way. For example, in chapter two the way you move between locations has completely changed, with an added threat to consider when making movements…

The story is fairly linear, and unlike Under the Mask, I don’t believe there are multiple paths to the end. While decisions made may impact how well you progress, the general route to the finish line will be somewhat similar for everyone.

Lumen Fidei also brings us back to a strong puzzle element in the game. While others have included puzzles, nothing has been quite as challenging as Asylum, that is, until now. The solution is not easy, and you may find yourself stuck, but once you get there you’ll feel rather accomplished. 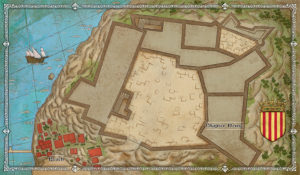 The ending to Lumen Fidei was also very different, with hints to a wider issue than that of correcting temporal faults or completing specific missions. Some things are mentioned which pull in from previous scenarios. I don’t think that not playing them would hinder progress or understanding in Lumen Fidei, but they’re obviously gearing up towards something ‘bigger’ in terms of storytelling. There are also different endings available depending on the choices you make. Will this have an impact on future games? Maybe…

The RRP for Lumen Fidei is £21.99, and it can be found at independent game stores, which can be found using this store locator.