How to experience Hong Kong in two days 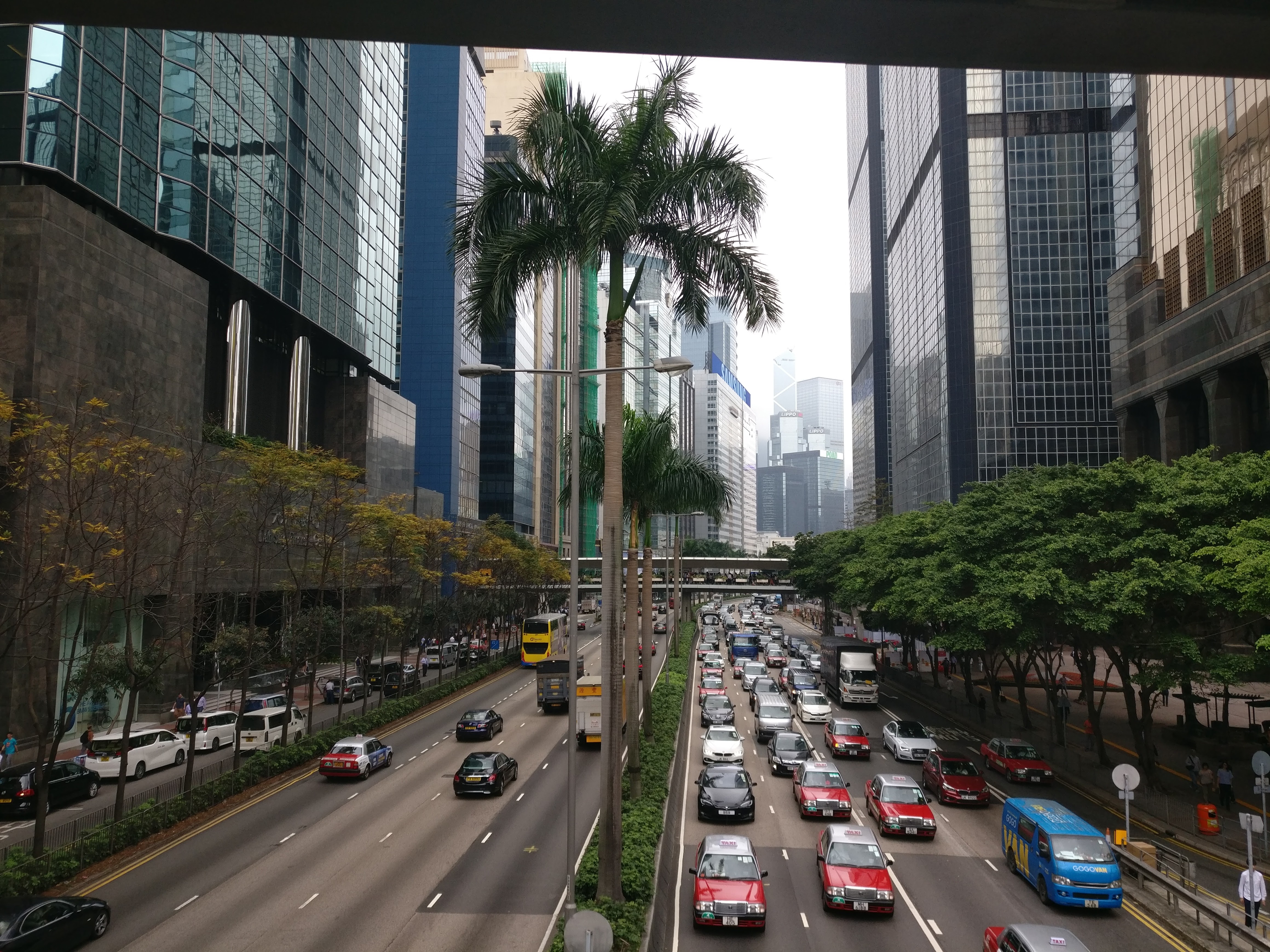 After our wedding in April, we jetted off on the most extravagant holiday we’ll probably ever go on. Our honeymoon consisted of a two-night stay in Hong Kong, followed by 9 nights in Bali, included 6 hotels, and took us on a journey of 17574 miles. Our original destination was just going to be Bali, but as we couldn’t fly direct, we decided to make our stop-off destination a two-night stay on the way there. So we found ourselves in Hong Kong, and this is how we spent it. 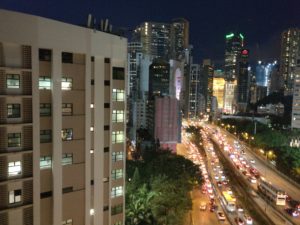 We landed at Hong Kong International Airport at about 7:30 am on a Tuesday morning. After a 12.5 hour flight, and very little sleep, we felt surprisingly ok, so after checking in at our hotel, the Dorsett Wanchai, we set off to explore the city.

First up, Hong Kong is really humid in April. Uncomfortably so. Prepare to spend your first 12 hours or so acclimatising, and changing your t-shirts on a regular basis.

We walked through the city towards the Central Plaza, where we stopped off at a street food vendor for lunch. Kam’s Roast Goose is one of a few street food vendors in Hong Kong who has been awarded a Michelin Star and has done so in 2015, 2016 & 2017. While the food was very nice, I’m not quite as keen on proper Chinese food as my husband, who loved this place. I hate to say it, but I’m one of those annoying people that prefer the Chinese food you get in UK takeaways, even though it’s not quite the real thing.

However, that being said, you can’t go all the way to Hong Kong and not sample the local food properly, so you should definitely seek this place out!

Eating in Hong Kong is different to the UK. Expect to be seated with people you don’t know, no chair stays empty for long when everywhere is super busy, and the people are all in a rush. Don’t spend ages picking your food and chatting. Places to eat in Hong Kong are just that, you sit, you order, you eat, you go. If you hang around after you finish eating, don’t be surprised if you’re told off by the staff, there’s probably a queue of people outside waiting to eat, and they’re not afraid to let you know they’re annoyed! 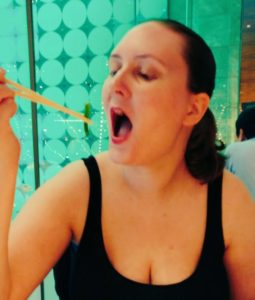 After lunch, we walked down to the harbour. We had been told to check out the light show on an evening, and we had considered booking a boat tour to watch it, but they’re quite expensive.

After walking down, we decided that we would just return later and watch the show from outside the Hong Kong Convention and Exhibition Centre, which would have great views. After spending some time at the Harbour, we walked back to the hotel for a nap before dinner.

Later that evening, we returned to the Hong Kong Convention and Exhibition Centre for a meal at New Shanghai, before heading out to the Harbour to watch the Symphony of Lights. I was so scared when we were seated as there were only chopsticks available on the table, but thankfully they had knives and forks when I asked.

We almost missed the start of the light show, but it turned out not to make much of a difference. I’m not sure why everyone raves about it so much, there’s some music, and lasers, but nothing special. I think if we had spent £70 for a boat trip we would have been very disappointed. We did enjoy sitting at the side of the harbour swigging wine from a water bottle though while we watched the show. You can take the girl out of Yorkshire, but you can’t take the Yorkshire out of the girl!

If you have spare time one evening in Hong Kong, by all means, check out the light show, but we wouldn’t recommend that you fork out for a boat ride, it’s really not worth it.

The following day we had an early start for our day trip to Lantau Island. Our first port of call was The Clock Tower at Kowloon Pier. It is the only remnant of the original site for Kowloon Station, peaks at 44 metres, and has been a declared monument in Hing Kong since 2000.

After the Clock Tower, we progressed to the TSL Jewellery Workshop where you can see how the jewellery is made before having a look in their showroom. It’s pretty obvious that the Clock Tower is just a filler piece on the itinerary, and that they only take you to the jewellers because they want you to buy something (it’s super expensive), but we weren’t too bothered as we set off to Lantau Island before lunchtime.

Our first stop on the Island was Tai O, home to a community of fisher folk who live in traditional stilt houses above the water. We walked through the fish markets before embarking on a boat tour of the stilt houses and then out into the bay to try and spot the pink dolphins.

After Tai O, we headed to Ngong Ping for lunch. Ngong Ping hosts the Po Lin Monastery where were treated to a vegetarian buffet meal. We also had time to explore the wonderful grounds, where we found statues representing the guardians of each animal in the Chinese Zodiac. We also had time to wander around the Ngong Ping before heading to the top of the hill where we the Tian Tan Buddha (or ‘Big Buddha’) sits at the top. Big Buddha is a bronze statue to symbolise the harmonious relationship between man and nature, people and faith. The statue is 34 metres tall and is surrounded by ‘The Offering of the Six Devas’, six smaller statues representing generosity, morality, patience, zeal, meditation, and wisdom, all of which are necessary for enlightenment.

Once finished with Big Buddha we journeyed back to Hong Kong Island. I think the best thing about taking a tour with people from all different nationalities is watching people assign cultural stereotypes to each other based on the actions of one family. For example, at every stop we visited, the Indian family were late back to the bus. According to the Canadians, this was typical of Indians, and it was also typical of the Americans to loudly complain that the Indians weren’t being respectful of other people’s time to the tour guide. Casual racism appears to be part of the coach tour experience… 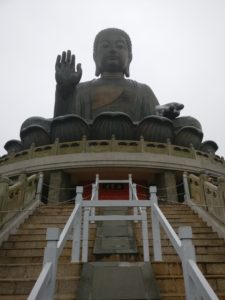 We really enjoyed our day trip to Lantau Island. It was expensive but made for a good day out. It’s a little annoying that the trip usually includes a ride on the Cable Cars to Ngong Ping village with 360-degree views. While I’m not too bothered about missing out due to maintenance (I have vertigo so the thought of this terrified me) but I would have expected the tour price to be temporarily reduced to compensate for this part of the experience being missed, and it was not.

After Big Buddha, we hopped back on the coach to the Mui Wo Ferry Pier and enjoyed a boat trip back to Hong Kong Island. Although our coach on the other side was due to take us back to the hotel, we decided to instead explore central Hong Kong, and make our own way back.

We walked through the centre of the city to Hong Park, a blissful oasis in the middle of a skyscraper jungle. We absolutely loved this park, and it was probably the highlight of Hong Kong for me. We wandered around looking at the Koi Carp, beautiful waterfall, the zen garden and the aviary, before making our way back to the hotel.

After a shower and change, we were really struggling to find somewhere to eat. It’s quite difficult in Hong Kong to find somewhere with Western food at a reasonable price. You tend to jump from dirt cheap street food to very expensive restaurants. We deferred to the concierge for advice and ended up having an evening at the races! The Hong Kong Happy Valley Racecourse is located right outside our hotel. The concierge provided us with a discounted entry ticket, and we decided to grab dinner at the racecourse. Unfortunately the food options there aren’t great, and we ended up having a McDonalds, but it was nice to have a drink and watch a few races before heading back for some sleep.  If you get the chance to pop to the Racecourse, it’s a great way to kill a few hours on an evening. 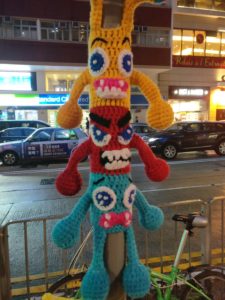 Our last day in Hong Kong consisted solely of a 6:30 am start to return to the airport. I did, however, get one last surprise on the coach journey back. It would appear that Farfetch’d also had an early start, and I managed to add the Asian-specific Pokemon to my Pokedex just before it was too late.

If there’s one thing we regret, it’s that we were so tired when we arrived that we completely forgot our original plan. We were really hoping to play an escape game, as we had heard that they were really good (and difficult) in Asia, but it slipped our mind and we missed the opportunity.