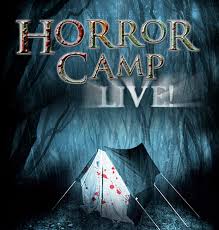 Last weekend I had the pleasure of returning to Camp Mass Acre for this year’s edition of Horror Camp Live. I last ventured to the campsite in 2013, and I had a fantastic experience. I have also been a regular at Scare Kingdom each Halloween, even braving Psychomanteum in 2014, and I have always been impressed with how Scare Kingdom has evolved their attractions each year. They have had big developments since I last came for Horror Camp, so I was interested to see how the experience had changed.

This year there were some familiar faces and some new ones, some much improved settings, but overall a similar format.

We started the night by being escorted to our campsite by the farm owner Abraham Cleaver, who if you have frequented Scare Kingdom in the last 4 years you may well be familiar with. Unfortunately this year he is lacking his wife/sister, who appears to have left him. But fear not, he’s on the look out for a new one, so play your cards right and you could be the new Mrs Cleaver!

If that hasn’t got you sold, you’re next introduced to the person in charge. This year that person is Dybuk, yes, the hag with a psychic pussy and a foul mouth has somehow got herself in charge…… It turns out that Fanny Twitch is dead, and Dybuk has taken over, but there is a shrine in Fanny’s honour, and her spirit is still alive and well at Camp Mass Acre. 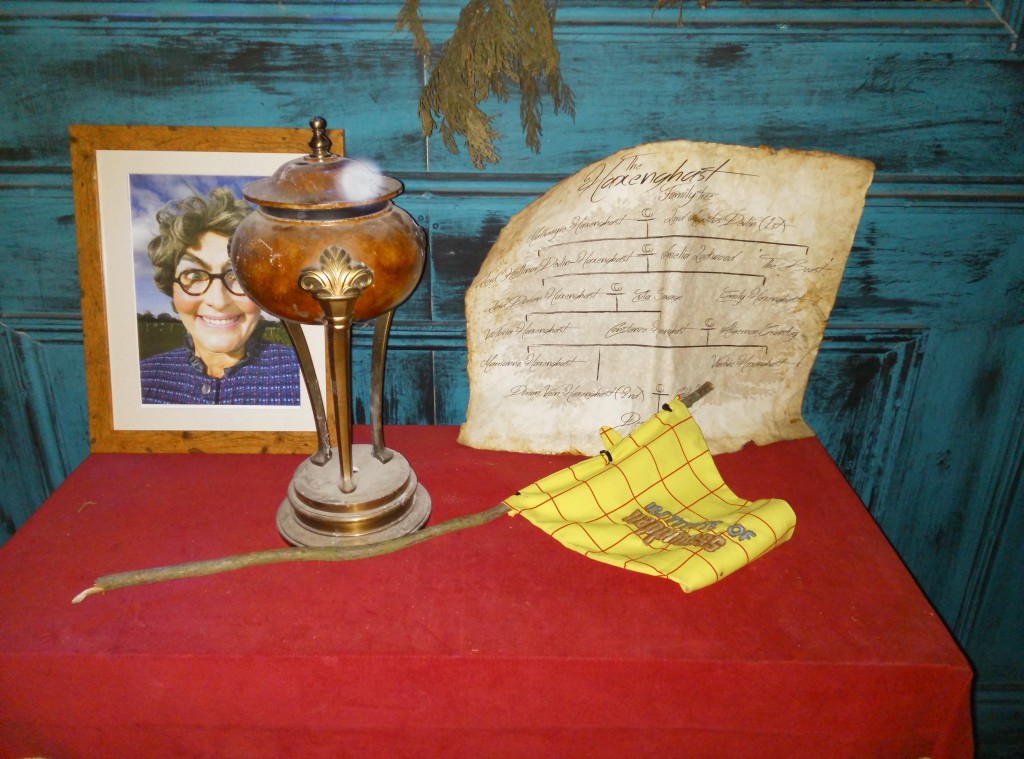 Dybuk is assisted by a new Incesta, (not the Incesta from 2013, and not Abe’s wife/sister, but the same name, which was a bit confusing) who will keep you entertained throughout the night, especially with her dancing!

This year the setting for Horror Camp Live has vastly changed from my last visit. The screening room from two years ago was perfectly fine and I had no complaints, but the setting this year was far superior. Thanks to the addition of the permanent structure Manormortis, this years holding area has been moved to Manormortis’ Ballroom. A fantastic room, intricately decorated and with a purpose built stage, excellent for putting on little shows throughout the night. Straight away it’s obvious that the whole production this year is going to bigger and more impressive.

The format for the night is still very much the same. The night starts with a film and food (which is very nice) and then once the film is finished, we are interrupted by Lockjaw… This time Lockjaw has set us a challenge, 9 missions for us to obtain 9 clues, and then a final test to pass. Again we were split into 3 groups, and went on 3 missions each.

The setting for the first mission is the new Psychomanteum building, and we are subjected to the horrors of Doctor Goodkind and the Femflesh. One thing I did notice, was that Horror Camp Live is messier this year….. It’s also obviously been developed to run alongside Psychomanteum, as the sexual undertones (or overtones) of the night and the missions are more prevalent than in my previous visit.

In between missions you may have been lucky enough to be chosen to receive a personal experience with Automata, a clockwork automaton with a human heart and brain, in the depths of Manormortis. Unfortunately I missed out, and as the group was quite large this year, I think that only a small portion of campers got to experience this part of the event. 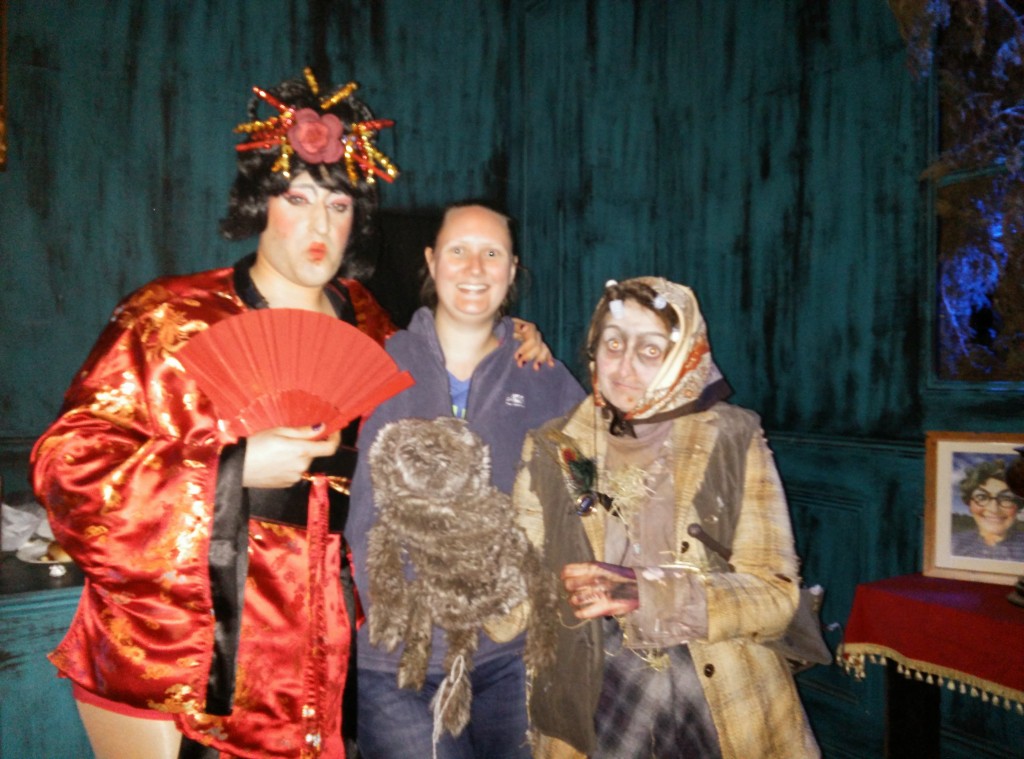 The third mission is set in Manormortis itself, a hugely impressive structure with great attention to detail on the set and props within. Manormortis was a permanent structure added to the site in 2013 and has become a great setting for both Horror Camp Live & Scare Kingdom, bringing a high production quality to both shows.

After the 3 missions are complete you have to pass the final task as a group, and we are subjected to the big finale. I think this bit of the night could do with some fine tuning, it didn’t quite feel like a ‘big finale’ and then it was just kind of over and we walked out of the room back to the campsite. It left the events of the evening feeling a little unfinished, and I remember it feeling a bit ‘bigger’ back in 2013.

Back at the campsite we settled in for the night, but having been before I laid there expectant of the raids to come during the night. This year I felt again that the raids were on a smaller scale than the last time I came, but I think this may have been due to us being in a much larger group, so there would have been more of us to get around. I think it’s difficult when you have experienced something before not to compare the two, but having said that, taking this year’s experience on it’s own was still immensely enjoyable. My companion this year had not been before, and she thoroughly enjoyed being joined in bed by the Femflesh!

There were a few things that let down the night slightly overall. The group this time was much bigger, 30 of us instead of 12, so our mission group was over twice the size of last time. This made the experience feel less personal, and I think that maybe 30 is too large a group to get the best out of the experience. We also unfortunately got stuck with the drunks in our group, who became quite disruptive during missions, and we felt that the actors had to put a lot of energy into keeping them inline and stopping them from ruining the missions. Despite having a drink limit for the event, this was obviously exceeded by some people, and perhaps this should be monitored more closely by the producers, for the sake of the other campers.

One massive positive that came out of this however was the actors themselves. My personal favourite is Dybuk, who is by far the star of the show. A great character, phenomenal actress, witty and quick of the mark, Dybuk is the perfect camp leader for the night. With her sharp tongue she is set to keep even the most unruly camper in line, and the night would certainly not have been the same without her.

Other ones to watch out for is Abe Cleaver, Dr Goodkind, Femlesh and Phoofa. Towards the end of the night you get the pleasure of Phoofa’s company, a sweet girl with poor personal hygiene, but a welcome addition to our group for the rest of the evening. 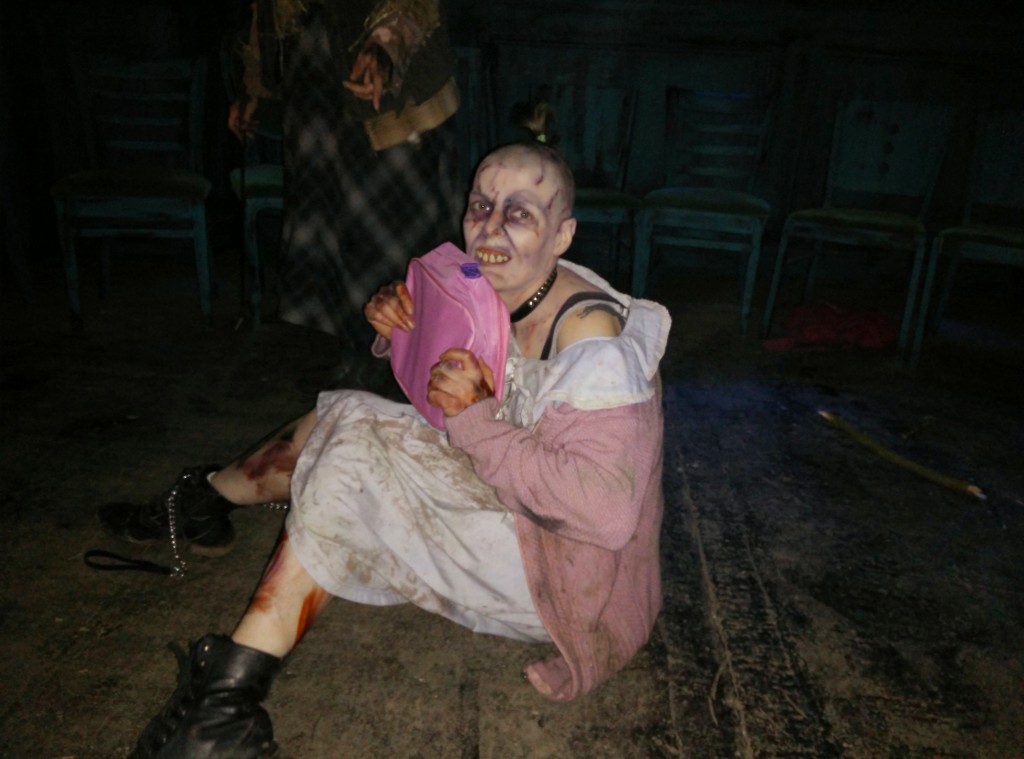 I will say that Horror Camp’s actors are some of the best I’ve seen, and the whole experience is really made special by them. Keep up the amazing work guys, and I’ll hopefully be back to see you again soon!