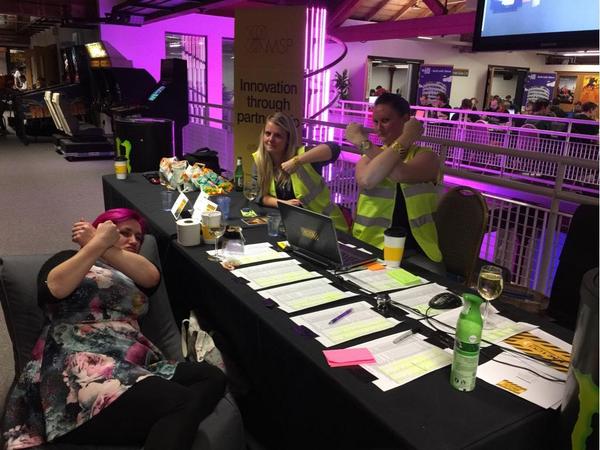 This weekend I have volunteered to help out at Hack Manchester, a 24 hour coding competition run as part of the Manchester Science Festival. After thrusting myself into event organising with BarCamp Manchester the previous week, I was interested to learn from people who had more experience than me, and who were running an event on a much bigger scale. Gemma Cameron has been organising Tech Events for years, and Claire Foster is one of the most passionate, professional and talented event planners I have ever met.

The concept of Hack Manchester if for teams of 4 to turn up on the Saturday morning, and within 25 hours (you get an extra hour due to clocks going back) you develop and present an ideal.

The Sponsors each come up with a challenge for the attendees, and the winner of each challenge will receive a prize, varying from £500 of Amazon Vouchers to Samsung Galaxy Tab S’s.

After setting up the venue we opened the doors to over 200 hackers competing for the prizes on offer, and after an opening presentation, the hacking began.

Hack Manchester is basically a 25 hour hackathon, which involves bringing together developers, to collaborate and programme, producing apps that can solve the problems given at the start of the competition. If you want to see what happened over the course of the event, included.co conducted a live blog that you can follow here.

It’s astonishing to see how long these developers can go for, even with the constant supply of coffee, energy drinks, entertainment and distractions. The event not only supplies the competitors with 24 hour refreshments and snacks (such as the Autotrader tuck shop!) but also with plenty of other things to do when taking a break. This year, the organisers arranged for some masseuses to come in during the afternoons to loosen up those tense coding muscles, and the reception area was filled with retro arcade machines, all free to play for the whole weekend. All this combined with a bean bag jumping competition (which I failed miserably at due to getting stuck after my jump) is more than enough to keep the masses entertained.

As the night wears on a number of competitors leave MOSI for the comfort of their own beds, but a good number spend the night, swapping between grabbing a few hours sleep and working on their code. As I write to this point it’s currently 5am, and there are still people working away and taking breaks on the games machines around me!

After surviving until 6am (kind of) I headed home to get some rest before returning for the Awards Show later that day. After setting up for the main event, we settled down to watch clips of the top 3 hacks in each category, before the winners were announced. A quick search for Hack Manchester on YouTube will show you many of this year’s submissions along with other videos from the weekend, or you can see a full list of the submitted hacks here. but a few of my personal favourites are below;

Overall the event was a massive success, I loved working with my Guardians of the Wristband team, and I can’t wait to do it again next year!