This weekend has been pretty hectic. For approximately 8-9 hours, across two days, we have fought through hordes of zombies, and some of us have barely survived. Basically, we spent the entire weekend playing Zombicide. Zombicide is a cooperative strategy game for 1-6 players, with successes determined by the luck of the dice roll.

Zombicide is a game by Cool Mini or Not, and was originally funded on Kickstarter.

Although the game is advertised as being possible to play with only one player, we didn’t actually try this out. Firstly, part of the joy of gaming to us is getting together with friends, especially for cooperative games, but I will say that this is the first game I have seen where I can actually imagine having a reasonable amount of fun playing alone. 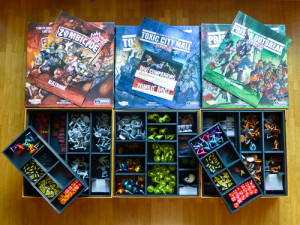 The box itself is quite impressive, it’s large and very well presented inside, with all the game pieces neatly stored in boxes. The game pieces themselves are also pretty awesome, the tiles depict various apocalyptic scenes, and characters have an outstanding amount of detail, even down to the zombies with tool belts and headphones. The game pieces can become problematic when packing them away again after first use, but we’ve found some nifty box inserts that can more neatly store your game pieces once the box has been opened.

Zombicide is a pretty awesome game. First off, there are ten different missions to choose from, so each game you play is completely different in terms of setup and objectives. Once the game board is ready, you take turns in completing actions for your survivors, and work together to achieve the mission objectives. Actions can include moving from one zone to another, combat, looking for items, getting in and out of cars, or driving cars along the streets. Once all survivors have taken their turns, the zombies take theirs. At the end of each game round, any existing zombies make their way towards the survivors, and new ones appear at allocated spawn sites. The number and type of zombies that spawn, is determined by the highest level player, so it’s wise not to level up too quickly, especially if you’re team mates will be left wielding only a pan, against stronger and larger hordes of zombies. It’s up to the survivors to manage the zombie hordes as well as obtaining game objectives, and if you don’t work together, you’re unlikely to survive.

It can look quite daunting initially, despite the rule book being wonderfully illustrated, and quite comprehensive, the sheer number of pages made us wonder how long it would take us to get going. For the tutorial, we probably spent about 30 minutes setting up and reading through the rules. Once we got going, it did take pretty much a full run through of the tutorial to get comfortable with the game turns. There are a few things it took us a while to remember, such as the hit order of range weapons comes into play even when firing into the same room, only searching once per turn, and working out where the zombies would move to in certain situations. Thankfully the tutorial is just about what you need to get this stuff down, the only thing we really struggled with (and still do) is remembering to place noise tokens down during combat. It’s also worth re-reading the rule book after a couple of games, as there is so much to take in, we found that we were missing little rules, but once you’ve played a few times, it’s easier to refresh your memory and return to the game.

This one little aspect of gameplay is a nightmare for us, we just can’t seem to remember to do it. Although, we’re pretty confident that in most cases it wouldn’t make a difference, as we often stay grouped together, so there would still only be one logical place for the zombies to head towards. In a way I feel that the game could be more streamlined if this was taken out, but I guess that I’m biased purely because it something I end up not playing with anyway, just because I forget, and we still do fine.

Combat can be a bit tricky, especially if you have an unlucky character who starts with a pan and only draws non weapon cards, but once you get some decent stuff, such as dual wielding sawn off shotguns and plenty of ammo, you’ll be laughing! It can also be quite annoying that you can’t choose who to aim for using ranged weapons, as this does seem a little unlikely for the situation. I understand having to shoot zombies in a particular order as this adds to the complexity of the game, but I’m not sure you should be forced to hit your friends first. A homebrew rule we found removes this issue, and looking down the list, most of them are really good, and could be welcome additions to the game.

We played quite a few scenarios, including easy, medium and hard, and also tried one where we could drive cars. Driving cars was really cool, we just sent two player out into a car to continually drive up and down the street keeping them clear for everyone else, for pretty much a whole campaign.

The strategy aspect of the game is also really good, as if you don’t think it through, you can quickly become overrun and start losing members of the team. It’s also not wise to change strategy halfway through, as if you waste time, you run the risk of running out of zombies during the spawn phase, which allows existing zombies further actions, and again, can kill off your survivors pretty swiftly.

After a few games, we initiated one of the homebrew rules. We decided that each game turn, the survivors would decide for themselves which order they would take their actions in, dependant on what would be most beneficial to the group. At the end of the day, this is a cooperative survivor game, so it makes sense that the survivors should also be able to work together to determine their own order of play.

Zombicide has amazing replayability, with ten missions in the initial pack, and numerous more available to download free from the Zombicide website. We’re also quite looking forward to developing our own scenarios! We also especially love how each character has it’s own set of unique abilities, making you have to think about the best way to play them, and adding great diversity to the group. You can also download additional characters from the Zombicide website, so you’ll never get bored of this game. 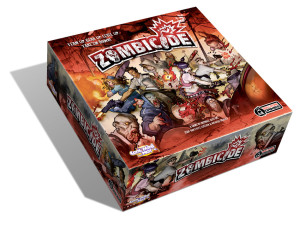 We had amazing fun with this game, with accidental deaths, heroic sacrifices, and a lot of hit and runs. Some strategies went well, and others bit us in the arse, but all in all, we severely enjoyed this game. As long as you’re ok putting a bit of effort in for the first time, this game is suitable for both casual and experienced gamers. We love it so much, we think we may have to check out some of the expansions and more recent seasons, but mostly, we’re excited for the soon to be released Zombicide: Black Plague, which we will also be reviewing!

The RRP for Zombicide is £69.99, and it can be found at independent game stores, which can be found using this store locator