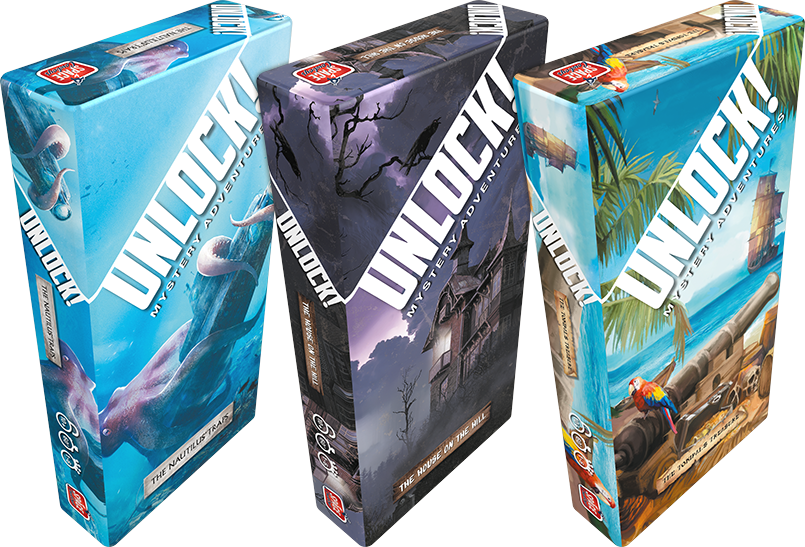 The original Unlock! Escape Adventures was one of our most anticipated games of 2017. As Escape Room enthusiasts, seeing the potential of bringing the thrill of escaping into the tabletop realm was super exciting. It was a bit of a rocky start. The game mechanics are good, but they take some getting used to. By our second and third games, we were mostly loving it, but a few issues remained. The hint system was rubbish. There were no limitations on how often and when you could request a clue, and some of them just made no sense, being no help at all. Despite the issues, the game showed a lot of promise, so we were excited to see how the second box set, Unlock! Mystery Adventures had improved.

The game mechanics remain the same as before. You first choose the scenario you wish to play. The game comes with three scenarios (and a tutorial) and each scenario has a corresponding deck of 60 cards. There are several different ‘types’ of cards;

Objects (red or blue cards) – These cards are required to interact with each other to progress through the game. Each pairing must contain one red and one blue card and will lead you to new information when paired correctly. Pair incorrectly, and you may be penalised.

Machines (green cards) – You need to work out the correct way to use a machine in order to progress. By completing other puzzles in the game you should find some instructions. Using the machine correctly will lead you to new information.

Codes (yellow cards) – These cards require a code to be entered into the app to progress. Use the other pieces of information available to find the code.

Other (grey cards) – These are places, results of interactions, penalties or modifiers.

Each game of Unlock! begins with revealing the top card of the deck. Any time a number is presented to you on a card (except machine cards) you search the remaining deck and also reveal the cards with those numbers. There are a number of ways to reveal more number cards. Some are obvious, such as on place cards, some are hidden within cards, and some are the result of interactions, either pairing red and blue cards correctly or working out how to use a machine.

It is through these interactions that you work your way through the game until ultimately, you solve the final clue.

The House on the Hill

Supposedly the easiest of the three scenarios, we re-familiarised ourselves with the gameplay and dove straight in.

For the past three days, paranormal activities have increased: apparitions, flying objects, possessed children… After an investigation, it has been uncovered that a group of youngsters who came to have fun in the abandoned house on the top of the hill read an excerpt from the Book of the Dead, thus unleashing these phenomena. The mayor relies on your group of experts to get into this house, find the book and put a stop to the curse!

Most of the puzzles were relatively straightforward, with just a few that took us some time to solve. The House on the Hill was a nice reintroduction to the game. In fact, there were quite a few puzzles in this one that we really enjoyed. Even those we struggled on weren’t ridiculously convoluted, it was just a combination of us not seeing the answer combined with (unfortunately) vague and unhelpful clues.

You dive on the outskirts of Lincoln Island when, suddenly, a sea monster attacks you. You have no choice but to hide in a submarine tunnel. While behind you, the walls are being smashed by tentacles, you dive towards the depths and the unknown. Your gas supply is dangerously dropping. Will you find your way out and reach the surface on time?

This one we struggled with a ton. Some of the puzzles were really obscure, and the hint system didn’t always help. I did love the inclusion of a sense of urgency which fitted really well with the theme, but again, we missed a few essential clues on some cards meaning that ultimately, we failed miserably. It also includes something a lot of people have not been happy about. Now, in Unlock! We’re used to being penalised when we get something wrong, but The Naultilus’ Traps penalises you for doing something right. I think this was added as a fun little themed ‘trick’ on players, but by penalising us it really puts a downer on the game, especially as it’s so close to the start.

There was one puzzle in particular that messed us up so much, that not only did we run out of time, but we went WAY over by the time we finally completed it. Some of the links on cards are just too obscure, and I don’t think it’s fair to allow you to think you’ve solved a puzzle, penalise you for getting it wrong, and not even provide a hint as to what you’re missing.

We did not enjoy this puzzle…

The treasure of Captain Smith, the greatest Carribean Pirate is on Tonipal Island! You were on its trail when the Governor of the Island had you arrested and thrown in a damp prison. Meanwhile, Johnson, the famous treasure hunter, is also on his way to Tonipal, determined to find the hoard before you. You have no choice but to escape, eliminate the competition and dig up the treasure!

I quite liked this one, which was good as the previous game almost put us off.

The games seem themed better, and the app is much slicker now. I loved one of the final puzzles which used the cards in a slightly different way. A couple of the puzzles were a little obscure, but nothing as frustrating as in The Naultilus’ Traps.

While we enjoyed two out of three of these puzzles, I can’t help but wonder how much testing is done for these scenarios before release. Many issues people tend to have are quite common, and so some reasonable playtesting should help iron these out. Don’t get me wrong, there should still be some difficulty in these puzzles, but they shouldn’t leave people feeling frustrated and annoyed, even after the answer has been found.

The Unlock! games are definitely going in the right direction, but our criticism of the original boxset still stands. A major overhaul of the clue system is required to keep this franchise going!

The RRP for Unlock! is £26.99, and it can be found at independent game stores, which can be found using this store locator.