Game Review – The Others: 7 Sins 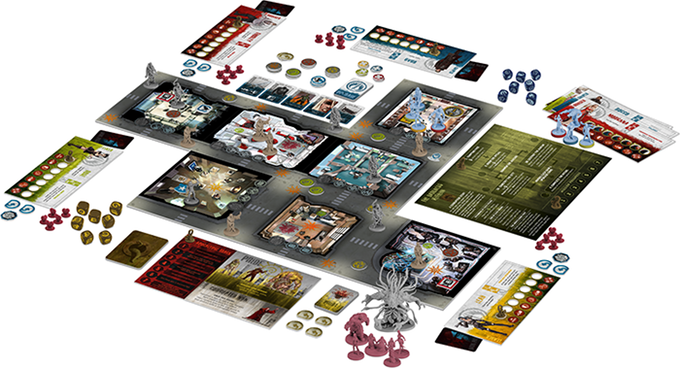 One of the games we’ve been most excited to play recently was The Others: 7 Sins. From the creators of Zombicide Season 1, and Zombicide Black Plague, we were in no doubt that the miniatures for this game would be exquisite, but how would the rest of the game measure up?

In The Others, the world stands on the brink of apocalypse, as the fanatics of the Hell Club have summoned the 7 Deadly Sins to lay waste to our reality. Slowly the Others have creeped into our lives, corrupting society from within. The city of Haven is the key to their invasion, but it will not go down without a fight, thanks to the actions of the paranormal organization known as F.A.I.T.H. (Federal Authority for the Interdiction of Transdimensional Horrors). 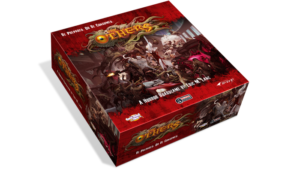 We seem to be seeing a few games lately that follow the one versus many, but The Others: 7 Sins is one that does it very well. With one player taking on the role of ‘The Sin’, and all other players (up to four) controlling members of F.A.I.T.H. Interestingly, members of F.A.I.T.H. are not ‘human’. We’ve found that with a lot of fantasy or sci-fi based games, one side is clearly ‘evil’, whereas the other is ‘good’, but in The Others: 7 Sins, whilst ‘the Sin’ is clearly evil, our hero’s are simply the better of two evils. The F.A.I.T.H. team consists of a couple of humans, but also demons, a vampire, a werewolf…

The miniatures, of course, are amazing. I don’t think we would expect anything less from Cool Mini or Not at this point, but the Sins figures truly are amazing, especially the Avatar for Pride, which is one of the best game pieces I have ever seen!

Setting up the first game was a bit of a throwback to Zombicide. There is just so much going on that this will never be a game you can just grab from the shelf to introduce to new players for a quick game. The rule book is more like a manual, and you need to be prepared for constant referencing for at least the first few games. You need to be dedicated to The Others: 7 Sins, and be prepared to get a couple of games at least under your belt before you can get comfortable with it. Thankfully, the concept was enough to keep us motivated, and now we can really enjoy our games, it can just feel a bit like a faff to get there.

First up, the box is very well presented, everything has it’s place, which is always lovely to see. There’s quite a bit of popping out game pieces before getting started, but nothing more than what we would expect for a game of this size. The artwork is amazing, with highly detailed game and character boards, and we couldn’t wait to really delve into this game.

The base set comes with seven members of F.A.I.T.H, although only three or four will ever be in play at any one time. Each member has different strengths, and you need to ensure you always have a balanced team in play. You are also given the choice of two Sins; Pride, and Sloth. Each Sin is accompanied in the game by one of three Acolytes, and the combination of Sins and Acolytes can have varying effects on the game.

In fact, one of the best things about this game is its replayability. There are so many variants in each iteration of the game, that no two runs are alike;

With all these interchangeable aspects to the game, it really allows you to change things up. There might be seven Story Boards available in the base game, but with two maps on each, and two main Sins available, that’s 28 different games without even taking the Acolytes and Apocalypse deck into account.

There’s also the introduction of the Hell Club, extra strong opponents randomly summoned if their Apocalypse card is drawn. Each deck risks different club members, and with a randomly shuffled deck you never know who, and when, they will join the game.

Rounds are a little different to usual in this game, and can take some getting used to. For the F.A.I.T.H. team, each character takes an individual turn in order, and this occurs twice before the end of a round, (sometimes more, if extra turns are awarded). Each turn consists of a movement and action, or action and movement. Actions include attempting to cleanse the area of harmful effects, or attacking your opponent. Each turn can also include any number of ‘free moves’ available to that player, including using city actions, or turning mystery counters over. This means that quite a lot can happen in the space of one turn, and if you have three to four players, each taking a minimum of two turns, that’s a huge amount going on in one round! The Sins player doesn’t actually have a specific turn. Instead, they have a number of ‘reaction’ tokens to spend each round, and can intervene after any character turn until they run out of tokens. Strategically speaking it can take a while to get used to when the best time to use the tokens will be, and the unusual turn sequence also takes some getting used to, but communication between all players is key to everyone keeping on top of gameplay.

Actions in The Others: 7 Sins is determined by dice rolls, with both the Sins player and the F.A.I.T.H. team having their own set of dice. If I had to pick out one thing this game is lacking, it’s definitely the number of dice. Often we needed to roll substantially more dice than available, and when all rolls count, it can be quite difficult to keep track. A pad and pencil is most definitely required to keep track of dice rolls, but just doubling the number of dice included in the box would be more helpful.

Once you’ve had a couple of runs to get used to all the rules, you can really start enjoying this game. It’s also quite good fun to play both sides, although I think I prefer being on the F.A.I.T.H. team. The Others: 7 Sins is a great one against many board game, and anyone who loves miniatures in a fantasy setting is sure to fall in love. The other five Sins can be purchased separately, as can further F.A.I.T.H. team members, so if you’re prepared to invest in this one, not only will your replayability go through the roof, but no doubt so will your enjoyment.

The RRP for The Others: 7 Sins is £92.99, and it can be found at independent game stores, which can be found using this store locator