Sub Terra is a cooperative game for 1 – 6 players. You’re trapped in a cave system, and you have a limited amount of time to find your way out. It might sound simple, but caves can be dangerous places, with unknown perils lurking around every corner. Do you stick together and progress carefully, or spread out and work fast before you run out of time. 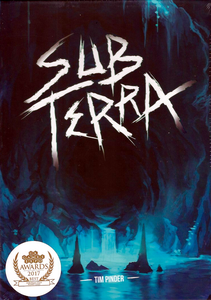 Sub Terra is a cooperative survival horror board game. You and up to five friends are cave explorers who have become trapped deep underground. You must quickly explore a tile-based cave system to find the way out before your flashlights die and you’re lost in the darkness forever.

You’ll need to work together to overcome deadly subterranean hazards – stick together for safety, or split up to cover more ground. One wrong step could knock you unconscious and your friends will need to stage a rescue. Light and hope are scarce. And worst of all, you don’t think you’re alone down here… 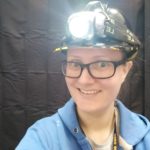 I first found out about Sub Terra at the UK Games Expo last year where it made my Top Picks list. We got to meet the game designer Tim and learnt about how the game was originally pitched at Wyvern’s Lair in 2016 where he was offered a publishing deal. We managed to squeeze a brief run through of the game (in a makeshift cave!) and I instantly loved it. That being said the run through was quite rushed and we would have liked to spend a bit more time playtesting, so when the game was finally released I jumped at the chance to review it.

Sub Terra is exactly the kind of game I love. Firstly, it’s cooperative, which always goes down well in my house. Secondly, the random nature of the game means that no two runs are the same, and the element of luck adds another layer of difficulty. Lastly, it’s hard. This isn’t a game where you can employ specific tactics to ensure a win. Even when you know what you’re doing it’s not easy to win, which in my opinion makes it more re-playable. Sub Terra is a great game in its own right, and is potentially the next best cooperative strategy game I’ve seen since Pandemic.

Let’s have a look at what else makes this a great game.

There are eight available characters to play, half of which are women, and not particularly in stereotypical roles. The highest ranking character is female, so is the engineer (who can blow stuff up!) and POC are also well represented. The female characters don’t have less health, and there’s no emphasis placed on strength or physical traits, which usually sees female characters being placed at a disadvantage. The only separation between characters is the rank in the group, and individual special abilities. Each character also has a cool little background card which describes their strengths and weaknesses.

The artwork is great, but sometimes it’s so dark things are difficult to see. You have to be careful when drawing new cave tiles to check for dead ends as paths can be hard to distinguish. Some of our group also had a bit of trouble distinguishing the icons on cards, specifically the difference between rough terrain and squeeze, or ledge and slide. It might be nice for future prints to improve this somewhat, especially for players who might already have visual disabilities. However, I love that the die glows in the dark, great touch!

All games are played with a minimum of four characters. Games with less than four people have each player controlling multiple characters to ensure the group has a good team. I’ve found that games with more players have been more enjoyable, as so many of the characters have essential abilities that you might need.

Each round sees players take up to three actions, but the third is a risk to take. You can move slowly through the cave, checking each new section before moving into it, or move quickly through the cave, progressing the game but risking more. Some features of the cave are harder to move through, you might need to squeeze through small space, use ropes to cross ledges or climb steep sections, dig out cave-ins, heal yourself or another caver, or even swim through flooded areas.

I also really enjoyed the tactical element of the game. Part of you needs the deck to be revealed as quickly as possible so you can find the exit before running out of time. Only, in order to reveal cave tiles quicker, you need to split up, putting each player at further risk. What happens if one of your cavers loses consciousness and there are no other cavers around to revive them? A lot of time can be wasted helping your teammates, and it’s not like you can just leave them, as you only win if 2 or fewer cavers are left behind at the end of the game.

If that wasn’t difficult enough, you also have hazards to contend with. After each player takes their turn, a random hazard is revealed, ranging from horrors in the depths of the cave that target cavers, floods, gas and potential cave-ins. I was a bit disappointed our horror tokens weren’t marked, (we had plain black markers) but that’s a minor issue.

Overall I thoroughly enjoyed this game, and everyone playing said they would love to play again. When you first open the box it looks like there’s a lot to get your head around, but it’s not difficult to get the hang of when you get going. There’s nothing new about the game mechanics (players take actions, resolve horror, draw and resolve hazard), the only complicated bit is working out how to win!

There are other games similar, but if you don’t own anything like this, Sub Terra would be a great addition to anyone’s game shelf.