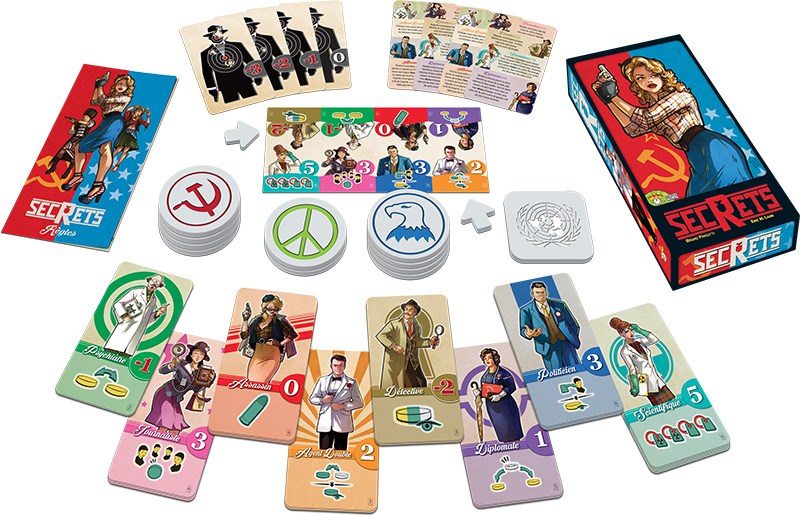 Secrets was a game we were very interested in taking a look at. Annoyingly, we completely missed it at the UK Games Expo earlier this month, but we were fortunate to be tipped off to its potential as a deception/bluffing game, which will always be our favourite genre.

During the Cold War, you’re the head of a spy agency and must recruit the best elements. Find your teammates, fool your enemies, and become the most influential agency. But beware the Hippies, they could very well save the world…

Secrets is an identity game. The action takes place in the 1960s. Players are either members of the CIA or KGB, or Hippies. Team affiliations can sometimes change during the game and must always be kept secret.

In Secrets, you are assigned to one of three factions; the KGB, the CIA or the Hippies. During play, you draw two different character cards, secretly choose one, and offer it to another player. That player can then choose to accept it and immediately apply the corresponding action, or decline it, returning the card to the player who drew them and forcing them to apply the action themselves. The KGB and CIA teams win by acquiring the most points before the game ends, but the Hippy wins if they have the least points, so watch out for them!

Character cards have both corresponding actions, and points associated with them, meaning that when choosing a card to offer, you must carefully weigh up the implications of both to whoever may end up taking that card. You’ll need to be smart to gain the tactical advantage, but on the other hand, sheer luck can cause you to switch teams at any moment. 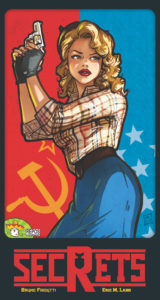 The problem is, you don’t necessarily know who else might be on your team. In fact, you might not even know which team you belong to. Playing as a Hippy might sound easier, but make it too obvious and other players will be trying to trick you into scoring higher. Plus, just because you’re Hippy now, doesn’t mean you’re going to stay that way.

Secrets is a great combination of deception, tactical thinking, and general confusion. It’s much easier to plan your actions when you know who you are, even better if you have identified your teammates, but too much switching and you can end up not having a clue which team you belong to. Personally, I think the games where no one knows who they are, are way more fun…

This game reminds us slightly of Saboteur (especially Saboteur 2), in that you’re playing on sides, but don’t necessarily know who else is on your side, and also One Night Revolution, where there may be so much swapping of roles that you’re not entirely sure who you are anymore. Despite certain elements feeling familiar in this way, the implementation makes it feel fresh and new, and a game we would happily play alongside our other deception favourites.

The RRP for Secrets is £17.99, and is due to be released in August 2017, where it can be found at independent game stores, which can be found using this store locator