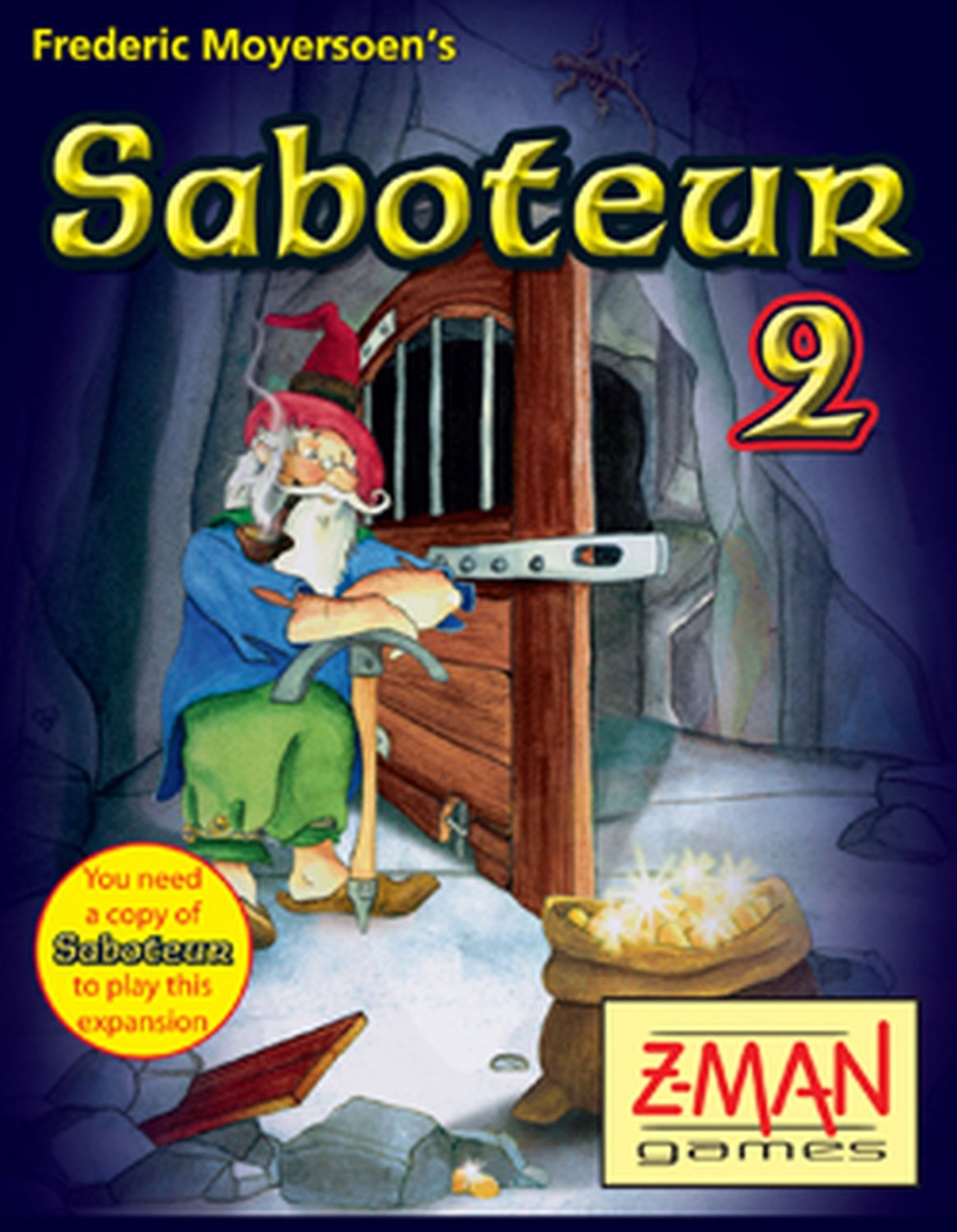 Last month I had the pleasure of reviewing Saboteur, the perfect way to introduce games of lies and deception to new players. After playing Saboteur, it swiftly ranked as one of the best deception games I have ever played. Except for Werewolf, which I think will always be top of my list, Saboteur for me jumped ahead of Resistance, Avalon, and other similar games, and here’s why;

Because Saboteur was such a great game for us, we were excited to play Saboteur 2, and see how the game had been developed.

Saboteur 2 is an expansion to the original game, not a stand alone version, and requires the path and action cards from the original. The new cards brought in by Saboteur 2 are 15 new role cards, new action and path cards in addition to those in the original, and the gold nugget cards have been replaced with gold tokens.

In terms of role cards, instead of having the two basic roles of gold miner and saboteur, the expansion pack adds on a number of new roles. Gold miners are now split into two teams, and additional new roles of the boss, the geologist and the profiteer. Each of the new roles has it’s own unique aim, and all roles have the possibility of being dealt in each game. This means that in games with 4-6 people, the dynamics of the table and goals of individual players can drastically differ from game to game. It also make it much harder to work out who you can trust, as so many roles can have goals that either aid or hinder those of your own, and it’s no longer as simple as deducing if a player is a gold miner or saboteur.

In addition to the new role cards, the expansion adds in more path card and action card options. Path’s can now be blocked from certain players only, and some interesting new actions can be played. For example, one card allows you to view the role of another player, and one allows you to change your role for a different one.

Put it all together and you suddenly have the potential for a much more interesting, and much more complicated game. While Saboteur was a great game for beginners, Saboteur 2 feels more suited the more experienced deception game player. We played several five player games of Saboteur 2, with people who had both played Saboteur, and people who hadn’t, but all of us had experience playing other deception games.

The initial game play took longer to pick up, even with experienced players, the addition of so many different roles, goals and actions slowed down the game play substantially. Even after six games, we still found the need to keep checking the rules to make sure we knew what our possible outcomes were, or to check what a particular action card could do.

In the first few games, we seemed to end up with much more confusion, especially with players who had not played Saboteur before, but after we finished the first round, everyone seemed to settle in much better. It actually became quite fun watching people try and work out who they could trust, and we found that in some ways certain roles can at first appear as though they are working alongside you, when it may then turn out, that they are not. The addition of extra roles blurs the lines between the two standard teams, and makes for a much more complex dynamic at the table.

Saboteur 2 has completely changed all the things I loved about the original game. It’s no longer simple, but the added complexity lends itself to a much more interesting game, and you can be certain that no two games are likely to be the same. Games of Saboteur 2 also tend to be much longer than the original, as with many more competing roles in play, the amount of path blocking is vastly increased.

Saboteur 2 at first can seem like a difficult game to grasp, and I would definitely recommend becoming familiar with the original game before moving on, but in groups who know the original game, and are experienced in the deception concept, Saboteur 2 can provide an interesting new challenge.

The RRP for Saboteur 2 is £9.99 and it can be found at independent game stores, which can be found using this store locator