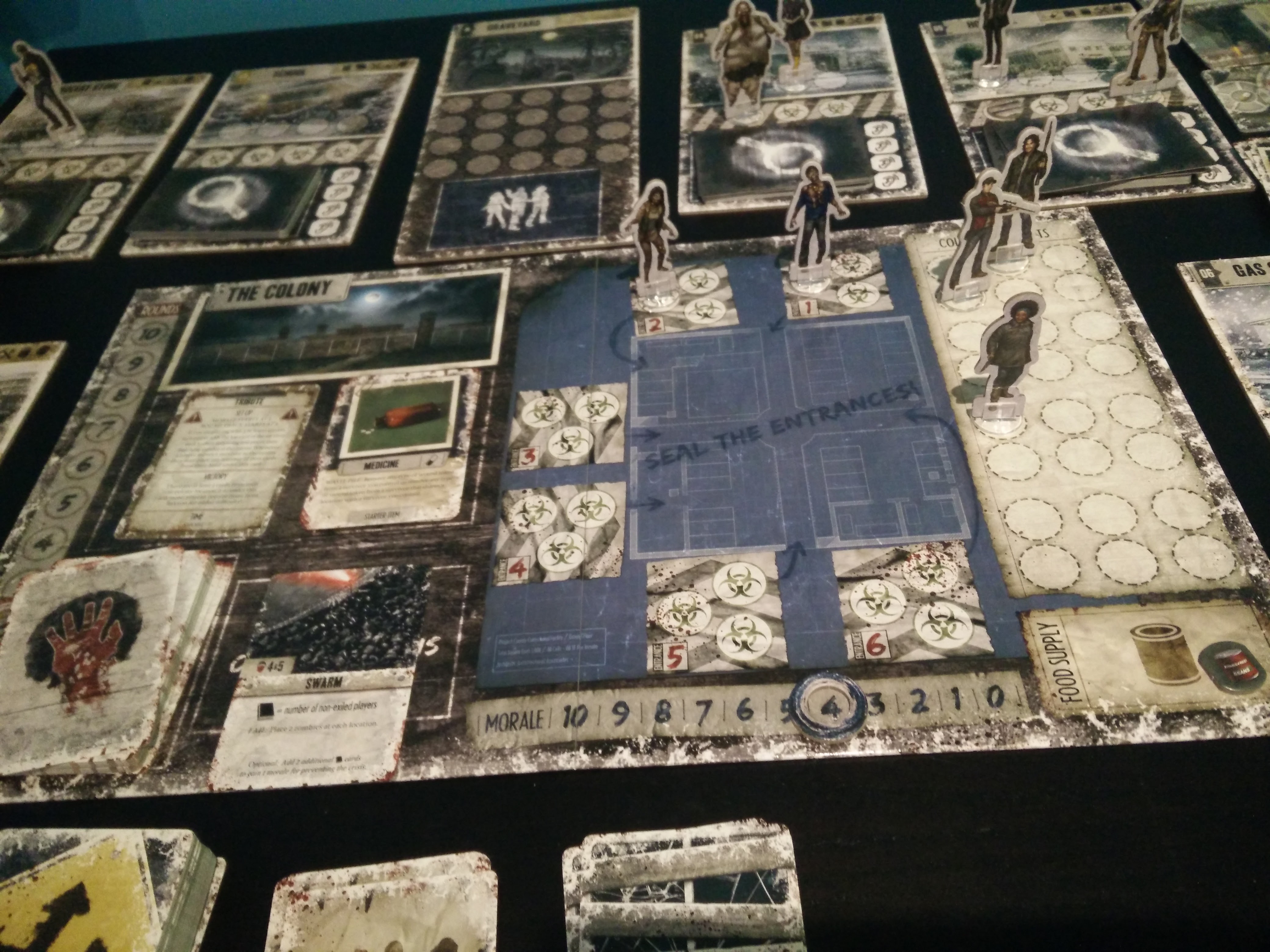 We seem to be coming across a common theme with new games we try that have really awkward rule books causing us set up issues or to play games wrong a few times until we get the hang of things. The best thing about this game is that it’s totally worth it in the end. Dead of Winter the Long Night is a stand alone expansion for Dead of Winter a Crossroads game. A complex game which challenges the players in many ways. 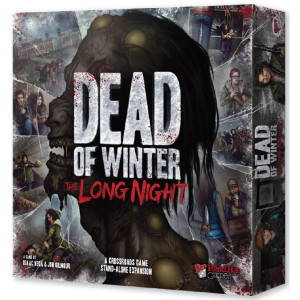 First up, some tips on reading the rule book. Read it cover to cover before you even unpack the rest of the box. Usually I ready the key bits of info, and then set up the first game as I ready the section on set up. The problem with Dead of Winter the Long Night is, it tells you (mostly) how to set up the game, and then (pages) after that says, ‘oh, actually, but if you’re having a 2 player game, then you don’t set up like that, you set up like this’. Ugh, so we had to redo set up. It wasn’t anything major, it’s just annoying when you could have been told upfront to refer to another page when setting up the 2 player variant of the game.

The setup section doesn’t even tell you how many dice each player starts with. In fact, it took me so long to find it the first time we played, I’ve forgotten where it’s hidden (It’s one to start, plus one per character you control, in case you were wondering).

Again, after playing a few base games, we decided to start adding modules. There’s a handy section explaining how to add in the Improvements, Bandits and Raxxon modules, which we did, and THEN it tells you that if you want to play with these modules you should play the special scenarios first time. Well, too late, we’ve already set up a regular game…

Also, it was at this point we realised, as the module set up told us to add the cards relating to that module to each of the decks, we realised that we had accidentally been playing with these cards even in our basic games, (which explains why some stuff would confuse us). You see, while here you’re told to add the module cards INTO the game, you were never actually told previously to take them OUT.

Lastly, the player cards have missing information on them. The crossroads card reminder is the last thing on the card, even though it’s one of the first things that needs to happen during the player turns phase, and it’s missing all the extra bits required when you play with modules. We think it would be much better if ALL turn phases were included, but those relating to modules are distinguished so they can easily be ignored if not required, but not forgotten when they are.

There’s a few other niggly things, some instructions are a bit vague, the types of cards and the special versions of them could be explained better, but the order of instructions is simply bad, and really should be improved for future versions.

now we’ve got the bad stuff out of the way, we can get on with the good bits. Dead of Winter is a cooperative zombie themed game, which is pretty much our two favourite things put together. As an interesting twist, if you’re playing with more than two players, then your cooperative is in jeopardy, with the possible addition of a betrayer.

Rather than one clear cut goal required to win, Dead of Winter the Long Night has one overall goal for all players to achieve, and also includes individual goals for each player. These are kept secret from the rest of the group, so you need to work out if the other player’s own aims are in line with the overall plan, or working against the group. In order to win, you need to complete the main goal as a team, but also complete your individual goal, meaning that by the end of the game, some players might have won, and not others. This is an interesting addition, and not something we’ve seen before.

There are a number of different main objectives you can choose to play. Each has it’s own setup and goal. Once you have set up the game board according to the chosen objective, it’s time to begin.

Each round has two phases, the players turn phase and the colony phase.

For the players turn phase, the first person (this changes each round) reveals the crisis for that round. In addition to working towards the main objective, each round presents a crisis for you to prevent, and consequences if you fail. Before each player takes their actions, the player to their right takes a crossroads card. This card starts with a specific condition, such as this many people are in the colony, or this specific character is in this location, and if the condition is met, the player with the crossroads card stops play, and reads the card aloud. Crossroads cards present the player taking their turn with a scenario, and options on how to react. Each option has different consequences, and it’s up to you to decide which way to go. The players then take actions, some of which require a dice roll, and some which don’t. Actions consist of things like moving, searching, attacking, contributing towards preventing the crisis or main objective, or contributing to the upkeep of the colony.

After the players turn phase, we reach the colony phase, where we assess the result of the crisis and main objective, maintain the colony, and add more zombies.

The round marker then moves, and the players turn phase begins again. 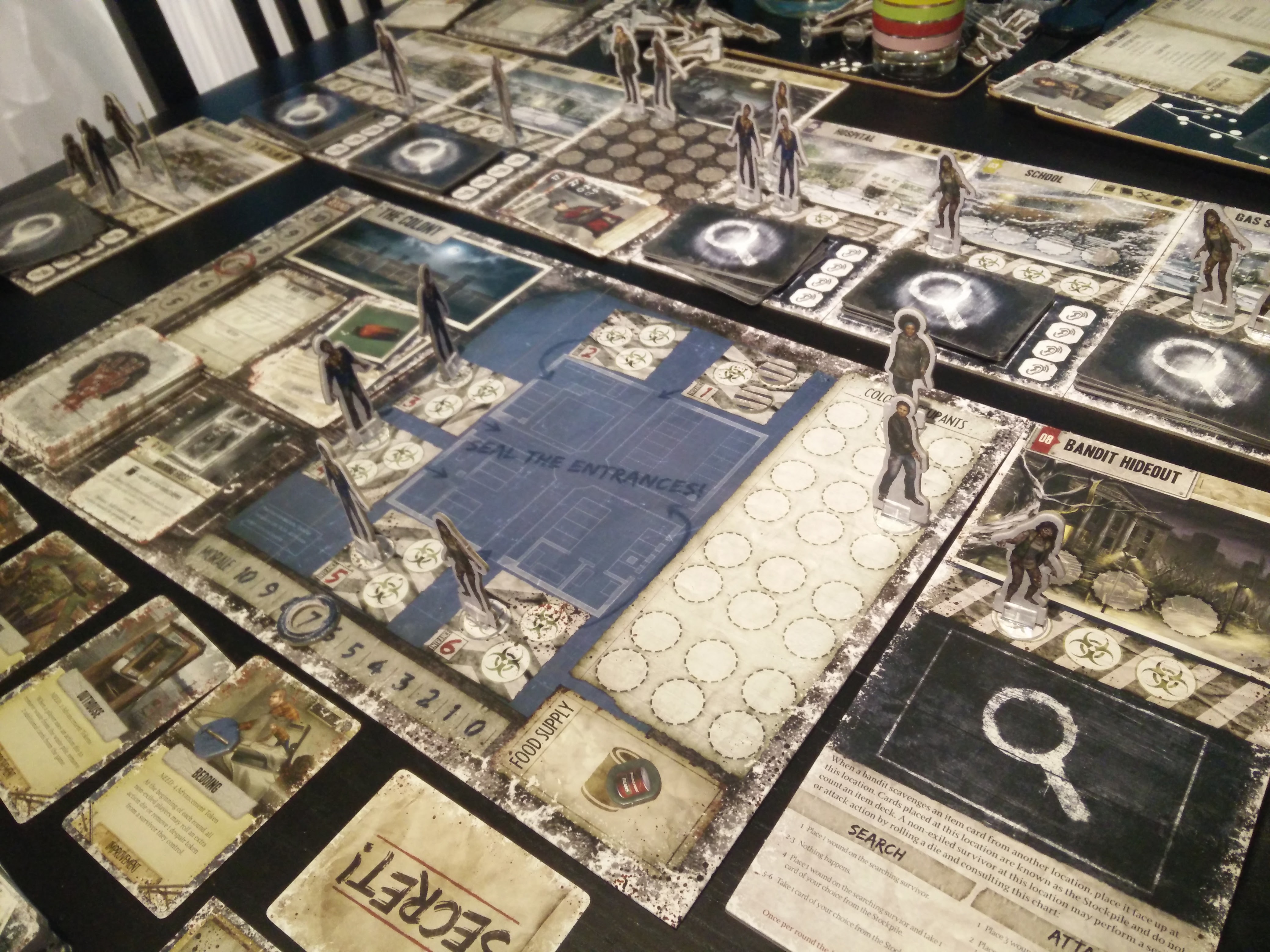 Now onto the good bit. After a few good base games (we might have been playing with some incorrect cards in there but we still enjoyed the basic gameplay) and an awful attempt at putting in modules, we played our first proper game, with all modules, correctly, and it was brilliant!

One of the nes things about Dead of Winter the Long Night, is that as a game, I feel it best reflects the struggles of a zombie apocalypse. There’s the risk of a betrayer in your own group, potentially working against the collective. It initiates paranoia and distrust as you watch how other players take their turns. It throws problems at you left right and centre, with a new crisis to solve each round, and the threat of a crossroad card cropping up at any time, you’ll really need to work together if you also want to complete the main objective in time. You’re always at risk, when you move, when you attack, you have to roll the exposure die to see if you are wounded. You can die, a lot. In one game I lost all but one of my characters in two rounds. You also need to work to stay alive, do you have enough food, is the colony overrun with waste, these are everyday issues you need to stay on top of. Everything has a consequence, if bad things happen, the colony loses morale, lose too much, and the game is over.

All these things can make Dead of Winter the Long Night seem quite complicated, but it’s how a zombie apocalypse game should be, and it addresses the issues you should be facing.

Then we move onto the modules;

Improvements – My least favourite, mainly because with everything else going on we haven’t really been able to use them, is the improvements. Four random improvements are available each game, each has a different benefit to the colony, and a price to pay. In certain circumstances you can pay towards activating the improvements, but as we find ourselves concentrating on requiring weapons, food, and medicine, the number of tool cards at our disposal is vastly reduced. A nice idea, just not one we find ourselves really using.

Bandits – I really like the bandits, because in a zombie apocalypse, the zombies are not your only problem. You’re also competing for resources with other people, and this is exactly what the bandits represent. Your interaction with them is usually simplified, but having that additional threat in the game as well as the zombies is a superb idea.

Raxxon – I’m still not entirely sure I get the story behind Raxxon, but as an addition to gameplay I love it! The area presents ANOTHER threat for each round to be dealt with, severe consequences, and the nest searchable deck in the game. First, Raxxon has the best equipment in game, and your searches will uncover invaluable weapons and benefits. Second, it introduces the pill effects. Certain cards have characters taking a pill, and the effects are determined by the roll of a dice. Roll high and your characters can obtain extra abilities, but roll low and they could be badly hindered.

The other great thing about Dead of Winter the Long Night? We’ve lost almost every game we have played. Not only does the game present a good challenge, but even when we lose we enjoy playing.

There aren’t enough main objectives, I would want at least double, but I’ll look forward to trying some homemade objectives or those designed by other players until more are released, but this is definitely a great game to add to our collection, and we’ll likely be playing Dead of Winter the Long Night over and over again.

The RRP for Dead of Winter the Long Night is £54.99, and it can be found at independent game stores, which can be found using this store locator