Game Review – The Crow: Fire it up! 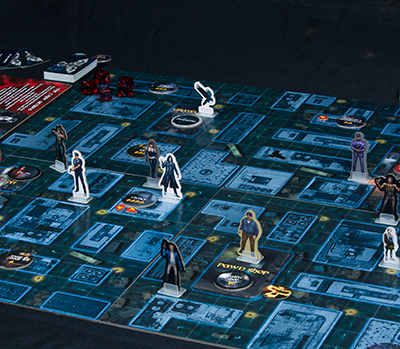 In a world without justice, one man was chosen to protect the innocent! On Devil’s Night in the Motor City, play as Eric Draven as he dishes out revenge against the gang that took his life and the life of his fiance, Shelly, in The Crow: Fire It Up! 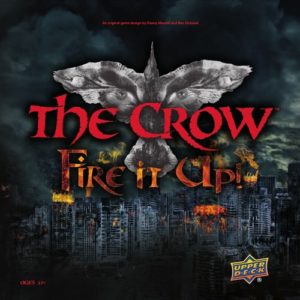 Slightly different to other one versus many games, in this version, it is the side of ‘good’ that plays solo, and you control four characters, Eric Draven, the Crow, Sarah & Officer Albrecht. The other players, (up to four of them) play the Motor City Gang, and control eight characters, Tin-Tin, Funboy, T-Bird, Skank, Grange, Myca, Gideon, and Top Dollar.

While each of the Motor City Gang characters currently in play get two turns each round, the Crow player gets four (sometimes five) turns to spread among all their characters.

While the Motor City Gang move to accomplish a secret mission (or just kill Eric Draven) the Crow player must pick off the four main gang members one by one, in a specific order, and then Top Dollar, who must be wounded twice before being finally defeated. The Motor City Gang work together to accomplish their mission, which can include setting buildings on fire, kidnapping Sarah or killing Officer Albrecht, while the Eric, who is much harder for them to kill, tries to complete his own kill list.

The best part of The Crow: Fire it up! Is the combat system. An interesting game mechanic, that seems to work really well. All actions are based on dice rolls, including combat. The attacker first rolls their attack dice, and any matching pairs of dice count as an attack. The defender must roll one symbol matching the attacker’s pair to defend against it. While this in itself is an interesting way of attacking and defending, the best part is that depending on which symbol is rolled as the attacking pair depends on how that attack is executed. Different symbols offer different attacks, some with added bonuses, even if defended.

Unfortunately there’s not much else we liked about this game. The Crow: Fire it up! is an unusual game to play. The turn sequence feels heavily weighted towards the Motor City Gang, but when you weigh up what they need to achieve versus the Crow’s mission, you can understand why. On our first run through, I (playing as the Crow) took out all four gang members and Top Dollar in six rounds. The Motor City Gang on the other hand, whose secret mission was to set fire to all names buildings, had achieved just two out of the eleven objectives.

Playing as the Motor City Gang, you’re heavily reliant on the luck of the roll, and we saw a lot of unfortunate rolls! As the Crow, I found little use for Officer Albrecht or Sarah, and with a limited amount of turns, it felt obvious to use them on my strongest character (Eric Draven) and take the Crow along with him for the bonuses.

We tried playing a few more times, but each game was as lacklustre as the previous one. While we’ve loved playing Upper Deck’s Legendary card games, we just can’t get on board with this board game.

The concept of the game is good, it just doesn’t appear to have been executed very well.  We’d love to see this combat system again, but just not the rest of this game. Also, for what you get, we can’t help but think it’s overpriced.

The RRP for The Crow: Fire it up! is £49.99, and it can be found at independent game stores, which can be found using this store locator