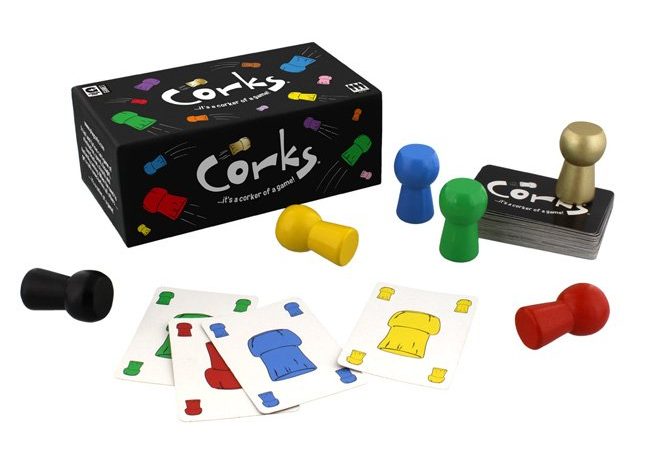 Corks was a bit of an unusual pick for us. During the UK Games Expo earlier this year, we happened upon an unusual looking game. It’s colourful and bright, and yet super simple and quick to play. With a PvP style game mechanic, and ability to take a high number of participants, could this make an appearance in our deception gaming nights?

Corks, is a super simple game to play. Think musical chairs, but with no music, and no chairs, but it has corks. Get it? No, oh well…

…Could you be the last person holding the gold cork?

A fast and furious card game of elimination, speed, thought, co-ordination, stealth and dastardly cunning – when the need to get a cork comes before all others…

It’s a corker of a game! 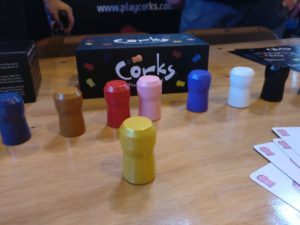 The game plays with up to 14 players, but you could easily extend this by adding a second, or event third box. The game is simple. Pull out enough matching sets of four coloured cards for each player, shuffle, and deal out the whole deck. Place corks in the middle of the table, enough for all but one player, within reach of everyone.

One person leads the game, by saying when players should make a switch. When a switch is called, every player should simultaneously place one card in their hand on the table for the player to their left to pick up, and then collect the card placed to their right. You cannot pick up your card until you have placed one down yourself.

The aim is to hold four cards of the same colour. As soon as one player has a full set, they can grab a cork from the centre of the table. Once one player has grabbed a cork, it’s a free-for-all between the remaining players to grab one too. The player who is left with no cork in hand is out, and you reset for the next round, with one less set of matching cards and one less cork.

This continues until there are only two players left, and a fight for the golden cork begins.

Corks is fast, furious and fun, and a great filler or party game. While it might not be a game we crack out when we’re looking to get our teeth stuck into a campaign, for £15.00 it makes a nice addition to our quick and easy party set.