We’ve played the original Codenames quite a few times, and it became a fast favourite for us, so when a pictures version was released, we were super excited to try it. Codenames: Pictures is the perfect game for in sync couples to show off with their obscure references no one else will understand.

Back at this year’s UK Games Expo we got a sneaky first peak at the prototype for this game, and we instantly knew we were going to love it. 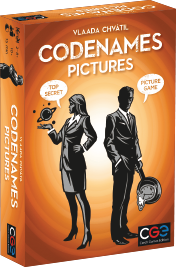 First up, it’s traditional Codenames enjoyment. We love the teamwork involved, so it’s one we love to play with people we know really well. Nothing beats the satisfaction of your partner getting some really obscure reference that only you two would know!

Secondly, it’s pictures! The main differences between the original Codenames and Codenames: Pictures edition is that Pictures uses picture codename cards instead of text (obviously), and the grid is slightly smaller. I do like that the grid has been adjusted for the game, as we felt that the Pictures edition was more challenging.

The premise of the game is the same as the original;

Two rival spymasters know the agent in each location. They deliver coded messages telling their field operatives where to go for clandestine meetings. Operatives must be clever. A decoding mistake could lead to an unpleasant encounter with an enemy agent – or worse, with the assassin! Both teams race to contact all their agents, but only one team can win.

Each team consists of one spymaster who has access to ‘the key’, a map of the grid indicating where each team’s agent’s are located, and the other team members make up the field operatives. The spymaster’s take it in turn to provide their field operatives with a clue word which will help them identify one or more agents based on the pictures in the grid. Incorrectly identify and agent and your turn is over, identify the assassin and it’s game over! But the first team to correctly identify all agents wins…..

With text, sometimes words can have different meanings, but quite often, it’s very clear what a word will mean. Alternatively, with pictures, you can be quite abstract in what you take from it, especially with the pictures in Codenames. Each codename picture card doesn’t just include a standard image, but instead it tells a micro story.

This means you have so many more options when thinking of ways to hint at links between them, but also make it harder to not use a clue that could lead someone to the wrong image.

We love the new challenges this version of the game presents, and adore the artwork on the codename cards. Huge kudos to whoever came up with the designs!

The RRP for Codenames: Pictures is £15.99, and it can be found at independent game stores, which can be found using this store locator