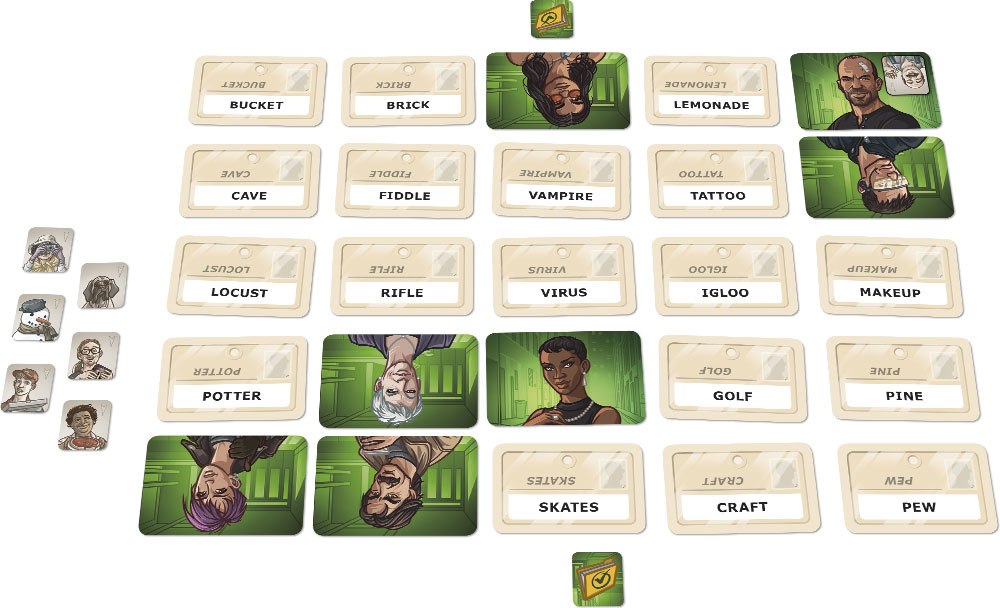 Yey! One of my favourite games from the last few years has released a two player version! We first discovered Codenames in early 2016, and later that year, we played their two new versions, Pictures (amazing) and Deep Undercover. Now, Czech Games have released a reworked version of the original game designed especially for two players. Codenames Duet has filled a void in my life, and it makes me very happy. 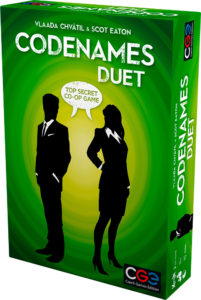 A few times we’ve tried to convert the original game into a two-player version, and while some are ok, none quite have the same playability as Codenames Duet. I must admit, we have played this game before. Codenames Duet was demoing at UK Games Expo earlier this year, and we managed to squeeze a quick game in to see how it would work. We were very impressed, and have waited patiently since then to really get stuck in.

You can play with more than two players, with extra people adding onto each side to form teams, but we wouldn’t. As soon as you have four people you would move on to the original game or one of the later versions. Codenames Duet was developed for two people to play, and this is what it does best.

So here’s how it works. You set the game up much the same as other Codenames variants. Each player sits at opposite sides of the table, so you only see one side of the key. The key indicates to you which codenames you need to provide clues for, which ones do nothing, and which ones mean game over. None of these concepts are new, but the way they work has been cleverly tweaked. You see, each player only sees a portion of the puzzle. Some codenames will feature on both sides of the key, and something that might show as an assassin to you will be something your partner needs to get you to guess.

Here’s the special part. If you see an assassin, it’s only game over if your partner guesses that codename on their turn. It doesn’t stop you from using it in one of your guesses, as it might not be an assassin on the other side…

The problem is, what’s to stop you from taking your time and providing one codename clues? Well, this is where your countdown timer comes in… Represented by small bystander tokens, each time you complete a turn, a token is removed. You also lose tokens when making an incorrect guess, so you’d better pull your socks up as you don’t have much time!

The standard setup for Codenames Duet is hard. I mean, I owned Pandemic for a year before I beat it hard, but in a good way, where you want to keep playing! 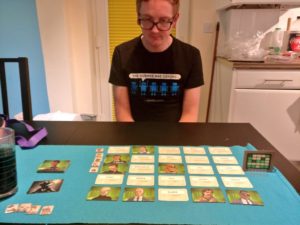 Once you’re in sync with your partner and you’re ready to move on, we begin the campaign mode. Campaign mode has you play multiple games that vary in difficulty. The game contains a map within it. Once you complete a standard game you can check off ‘Prague’. From here, you can move onto any city connected, and attempt its game setup. Each city is accompanied by two numbers; the first number is how many turns you’re allowed for that game, and the second, is how many mistakes you’re allowed.

In the basic game, all your turn tiles are placed bystander side up, and can be used for an incorrect guess or to indicate a turn has been completed. In some campaign games, such as Cairo, you have 9 turn tokens and 5 acceptable mistakes. This means that out of your nine tokens, only five are placed bystander side up. The other four represent turns only, so if you make six mistakes, it’s game over, regardless of how many turns you may have left. Complete all the games on the map, and you’ve succeeded in your campaign!

While Codenames has long been a party game favourite of ours, we’ll no longer have to wait until other actual people come to the house to play…

The RRP for Codenames: Duet is £21.99, and it can be found at independent game stores, which can be found using this store locator