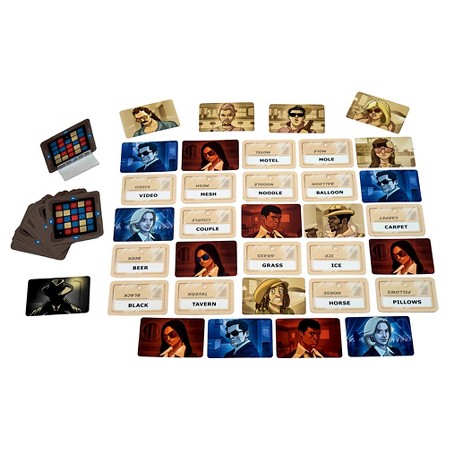 It’s no secret that we’re huge fans of the Codenames franchise. We loved the original game, and got hooked on Codenames: Pictures, but what would we think of the latest addition, Codenames: Deep Undercover?

While Codenames: Pictures won us over with its ability to infer so many different meanings onto one image, Codenames: Deep Undercover, takes the game back to its roots, and uses text cards to form the grid. It does however, have an interesting twist. This version is more suitable for the over 18’s! 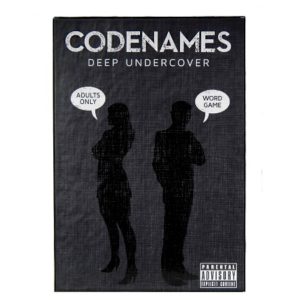 A reimplementation of the original, Codenames: Deep Undercover can be played as a stand alone game, or in conjunction with other versions. Many cards are seemingly innocent when viewed alone, but when you look at the overall theme of the cards, you’ll begin to see in what direction your clues are likely to go. Unfortunately our version was missing all the Agent Cards when it arrived, so we had to use the cards from the original to compensate.

Gameplay is the same as previous versions;

Two rival spymasters know the agent in each location. They deliver coded messages telling their field operatives where to go for clandestine meetings. Operatives must be clever. A decoding mistake could lead to an unpleasant encounter with an enemy agent – or worse, with the assassin! Both teams race to contact all their agents, but only one team can win.

Each team consists of one spymaster who has access to ‘the key’, a map of the grid indicating where each team’s agent’s are located, and the other team members make up the field operatives. The spymaster’s take it in turn to provide their field operatives with a clue word which will help them identify one or more agents based on the pictures in the grid. Incorrectly identify and agent and your turn is over, identify the assassin and it’s game over! But the first team to correctly identify all agents wins…..

Codenames: Deep Undercover is sure to bring some hilarity to your evening. With clues ranging from innocent to x-rated, and double entendres all over the place, I wouldn’t recommend this as a family game. I would however, very much recommend it for adults!

Despite moving back to the text format for the codename cards, it doesn’t take anything away from the game. Although, I do very much hope that the next edition combines the two…

The RRP for Codenames: Pictures is £18.99, and it can be found at independent game stores, which can be found using this store locator.