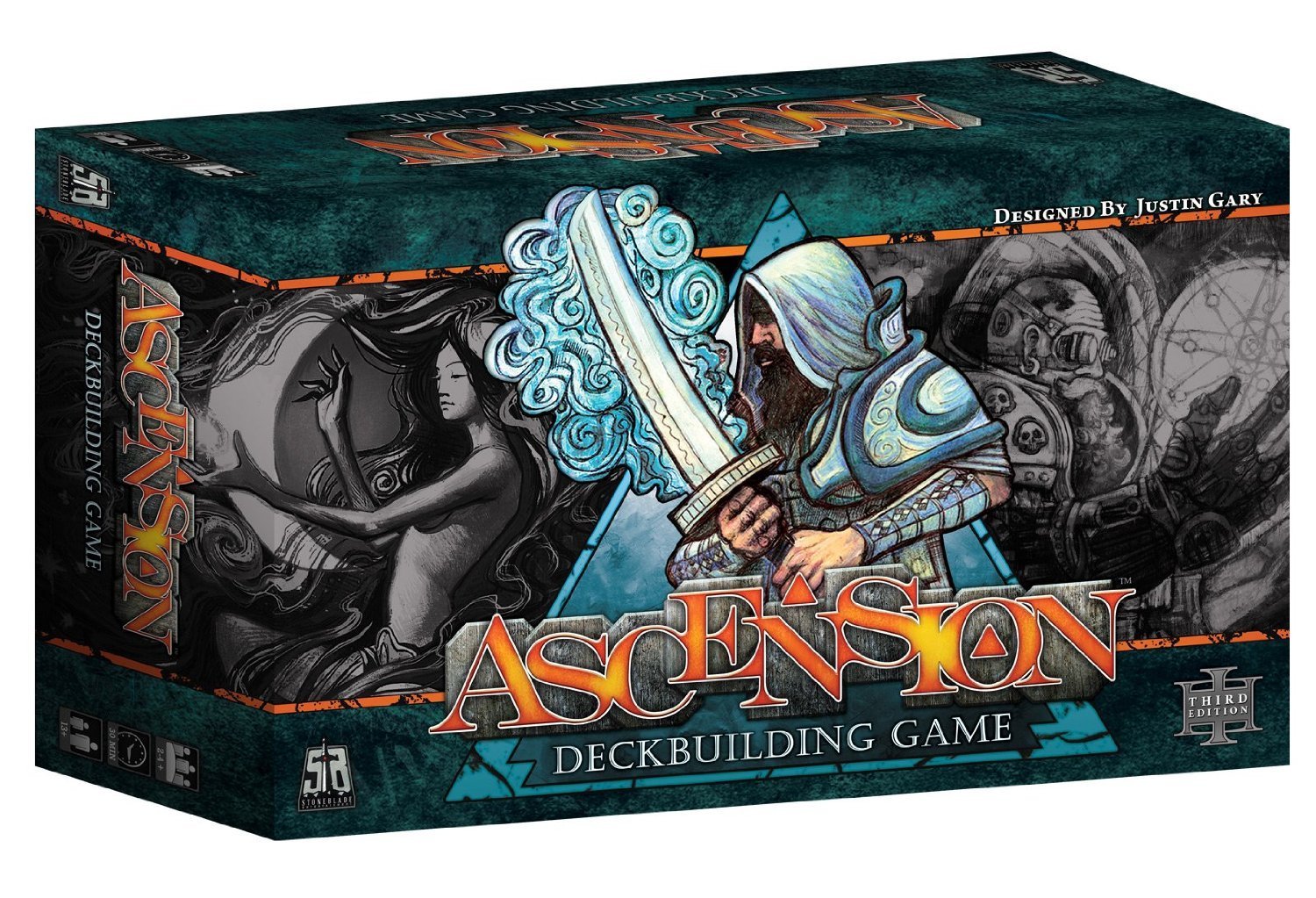 Ascension is the latest deck building game I have had the pleasure of looking at. Only late last year, was I introduced to the World of deck building through Legendary Marvel. Despite the unfamiliarity of the game, it was one I really enjoyed, so I was excited to see a now more familiar game mechanism implemented in a different way.

The game takes place in Vigil, a world that has been protected for millennia by the Great Seal, keeping the realm free from divine influences. It was put in place after an ancient war with a corrupt god, Samael the Fallen, when it was decided that none of the gods should be able to interfere. But now, the Seal is failing, and nightmarish Monsters that had been forgotten are breaking through. Your job, as a hero of Vigil, is to take your small, ragtag band of Apprentices and Militia, and gather an army powerful enough to lead you to your destiny as the Godslayer, and in doing so, slay Samael once and for all.

During the game, players will recruit powerful heroes and constructs from four different divine factions to aid them in their quest:

The basic aim of the game is simple. Using your basic starting deck, spend ‘runes’ (the in-game currency) to acquire more powerful cards to add to your deck. As you defeat monsters, and acquire better cards, you earn honour points. Once all available honour has been taken, the player with the most is the winner.

The cards are split into different types;

In addition, the hero and construct cards are split into four factions. Multiple cards from a faction will often compliment each other, and provide an overall more powerful deck.

Throughout the game, you deal with three major resources;

In order to win the game you must use strategy to build upon all three resources, and do so in a more efficient way that your opponents. For example, more power is required to acquire better cards, better cards are required to defeat more powerful monsters, and more monsters must be defeated to obtain honour. You must use all three resources collectively to achieve your ultimate goal.

The cards you can acquire, and the monsters you can defeat, are chosen from the game’s ‘centre row’. A starting deal of six random cards which determine the choices you make and the strategy you implement. This can make for an unusual and varied game. The cards replenish as soon as one is removed, meaning all your decisions in game will be influenced by the plays available to you on each turn. 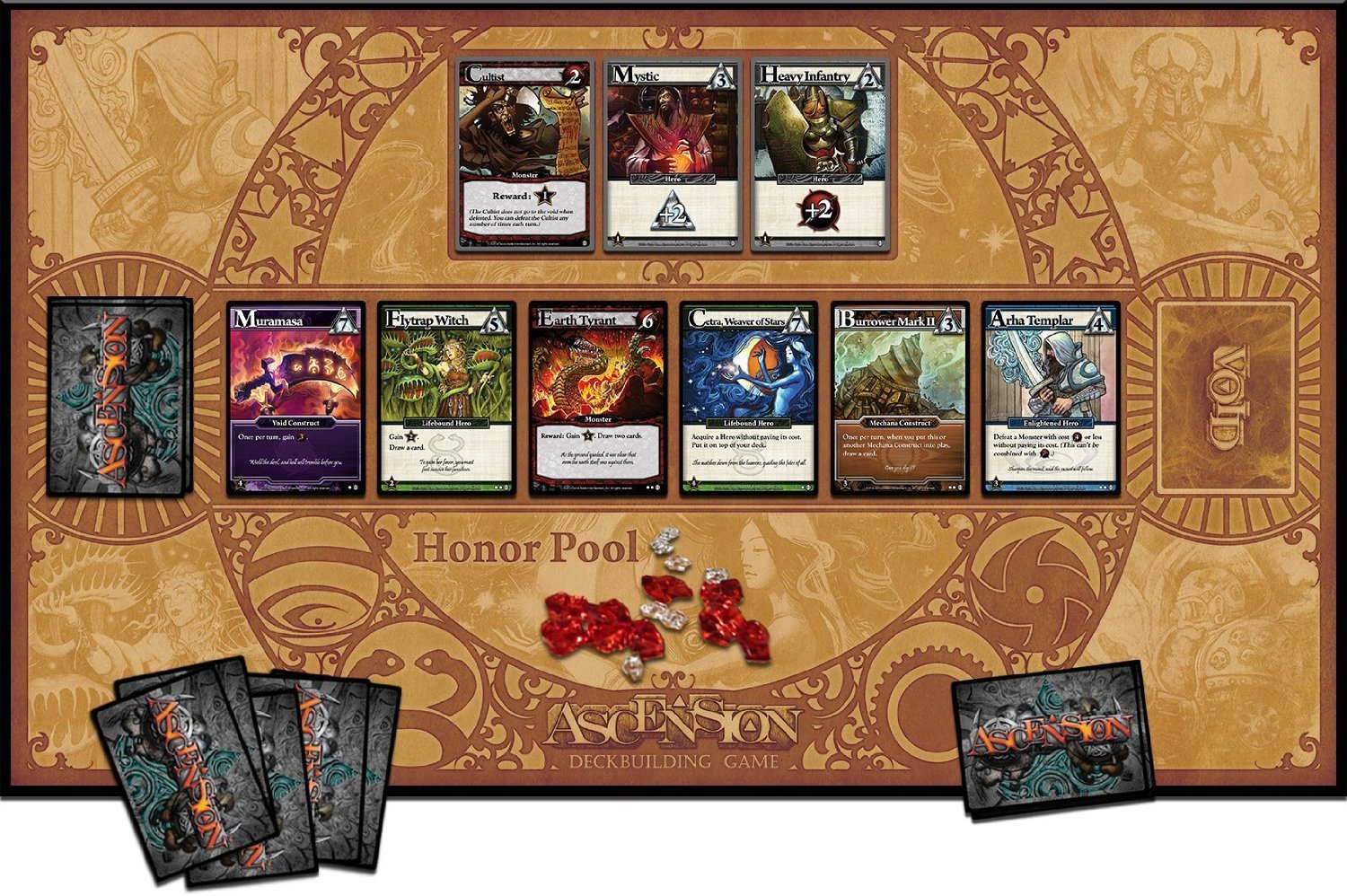 The board, the cards, and the resources are all simply lovely to play with. The board is sturdy, the cards are thick and of a good size, and the resources don’t feel cheap. Although I like the artwork on the cards, there does feel to be a bit of a disconnect throughout the whole deck. I do wonder if two artists were employed, as there feels like a distinct split in artwork from one card to another.

Once you get the hang of the basic mechanics, which doesn’t take long, the game is fast paced and interesting. I did struggle somewhat with getting the resources the right way round. I’m not sure what it was that caused me some confusion, but after a few games I seemed to stop having to constantly check which were runes, what was power, and where my honour was showing on each card quite so often.

I enjoyed Ascension, but almost in a very different way to Legendary Marvel. With Legendary I liked how the objective for each game was different, as it added a new dynamic to every game played. Whereas in Ascension, I instead seemed to enjoy it’s simplicity. I often play games with people who aren’t quite as emphatic about tabletop as I am, so it’s good to have something on my games shelf that I can use as an introductory game. Something unusual, but easy to learn, and quick to play, and Ascension looks like it may be a good addition to this group of games.

I love a complex game as much as the next person, but sometimes you only have a spare half hour…

On the flip side I have had games of Ascension that I have not enjoyed as much, strangely, the reason is almost the same as the reason I usually enjoy games. As much as Ascension is fast and simple, sometimes I just don’t feel like I ever quite got going before the game ends. In fact, we sometimes decide to extend the goal posts, and add more honor to the game than we are supposed to. This allows us to prolong the game, and to also build up a really fun deck, where you can start to see some really interesting play combinations appear. 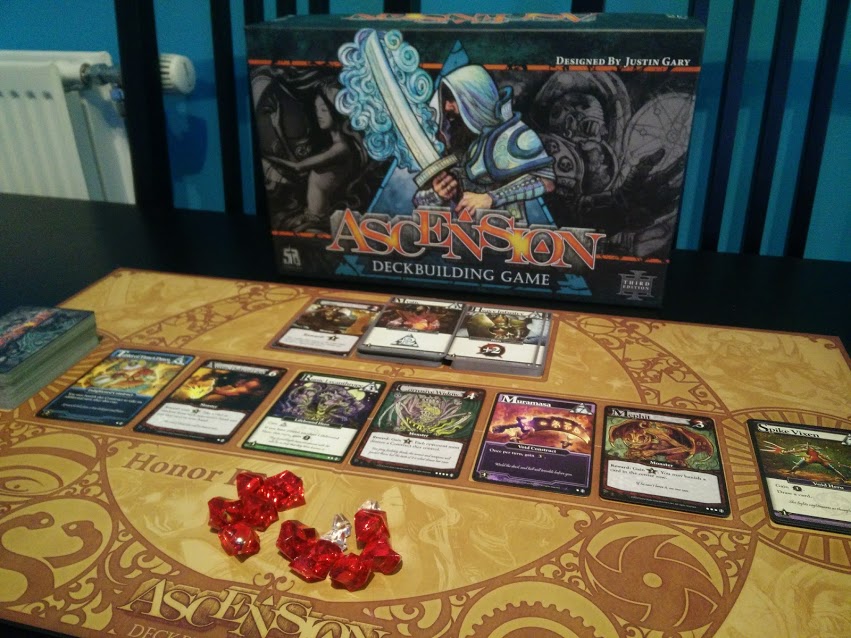 Despite being quick and easy to play Ascension boasts an impressive deck to play with. I doubt many people can say they have played with all imaginable combinations of cards. With so many to choose from,  we have immense fun finding the latest combination of cards to play for the most interesting or powerful maneuver of that game.

We really enjoyed playing Ascension, and are sure it will be a firm favourite when trying to convert family members to tabletop gaming with quick and simple strategy.

The RRP for Ascension (3rd Edition) is £31.99, and it can be found at independent game stores, which can be found using this store locator