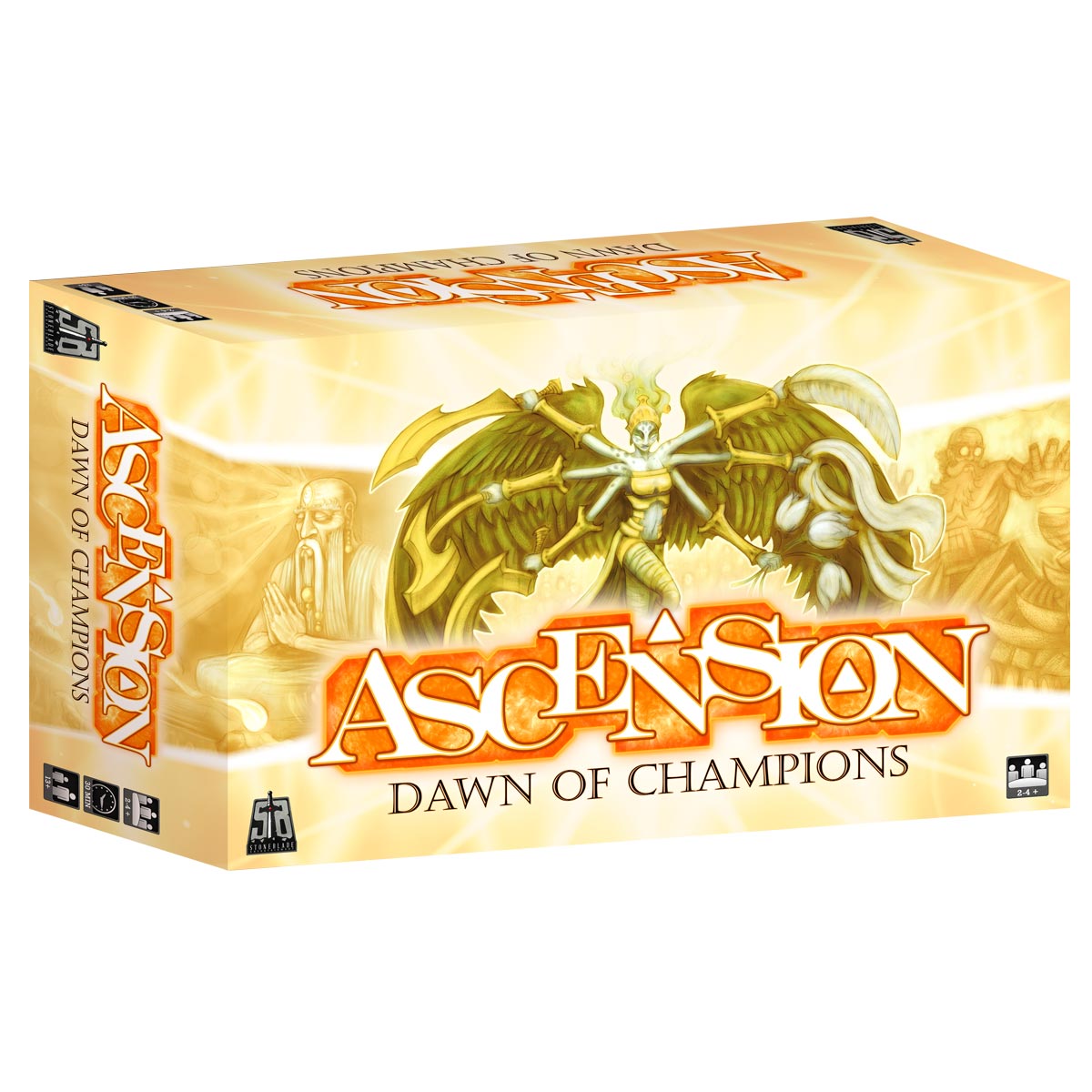 Last week we had our first taste of Ascension, a deck building game originally released as Ascension: Chronicle of the Godslayer. We enjoyed Ascension for it’s simplicity and speed of play, so I was looking forward to seeing how Dawn of Champions, a stand alone expansion, would change things up.

Dawn of Champions introduces Champion cards and faction specific monsters, plus the rally mechanic, to build upon the original game.

Where there were once six realms, now only a single remains: New Vigil. In Ascension: Dawn of Champions, you take on the role of your faction’s Champion to guide them to victory in this world of new alliances and ancient foes.

New Champion cards let you play as a faction leader, building your reputation to unlock powerful cards and effects. This set also includes new multi-faction cards to acquire and defeat, including Constructs and Monsters!

The basic gameplay doesn’t change, you still battle to see who can collect the most honour. The only differences are all additional mechanics played on top of the basic game. 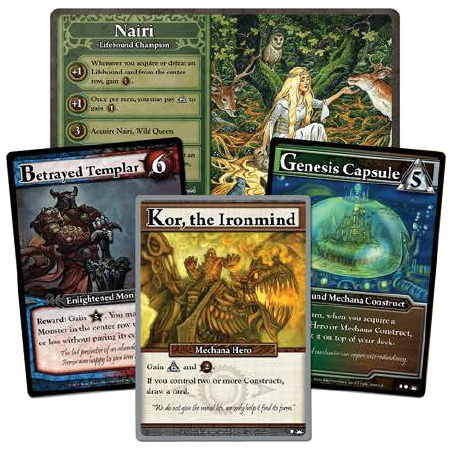 Champion cards – Dawn of Champions comes with four oversized Champion cards, one representing each faction. Each player is randomly assigned a Champion card, which can offer enhancements should the player make certain choices. Each Champion card offers a number of bonuses. These bonuses are only received when a certain number of Reputation tokens have been obtained. These can be bought for power, or gained when the player defeats or obtains a card from the center row of the same faction as their champion. Rewards include adding your champion to your deck, and the ability to ‘rally’ when acquiring or defeating any hero or monster of your faction.

Rally – The rally mechanic comes into play when a card you acquire or defeat tells you to ‘rally’, or if you have gained the top reward from your champion, and you acquire/defeat any card in the centre row. Rally, means that when a card is removed from the centre row (either through acquiring or defeating it), if the card drawn to replace it is of the faction you are rallying, you can acquire or defeat that card for free.

At first glance we weren’t sure if these new additions would really add anything to the game. You don’t have to aim to acquire or defeat from your own faction, you can still obtain honor from defeating any monster, and all heroes and constructs will enhance your base deck. So what’s the point?

The point is – to rally.  We all know from the base game that it helps us to build our deck using cards from the same faction. Hero abilities are often enhanced when used in conjunction with other cards of the same faction, and using this to your advantage can lead to some powerful combinations. But combine this with the rally mechanic, and you can find yourself in a very advantageous position. There aren’t a huge number of cards that come with the rally effect, but if you gain the top reward from your Champion card, then all cards acquired or defeated will rally your faction. This means that for every card removed from the centre row, you have a 25% chance of gaining it’s replacement for free. This could land some high powered cards in your deck, or give you a good supply of honour for a defeat. In addition, get really lucky, and the card you draw might also come with the rally effect, giving you multiple rewards per turn.

While it might sound a little confusing until you get the hang of it, the ability to rally is one that you don’t want your opponents gaining before you… 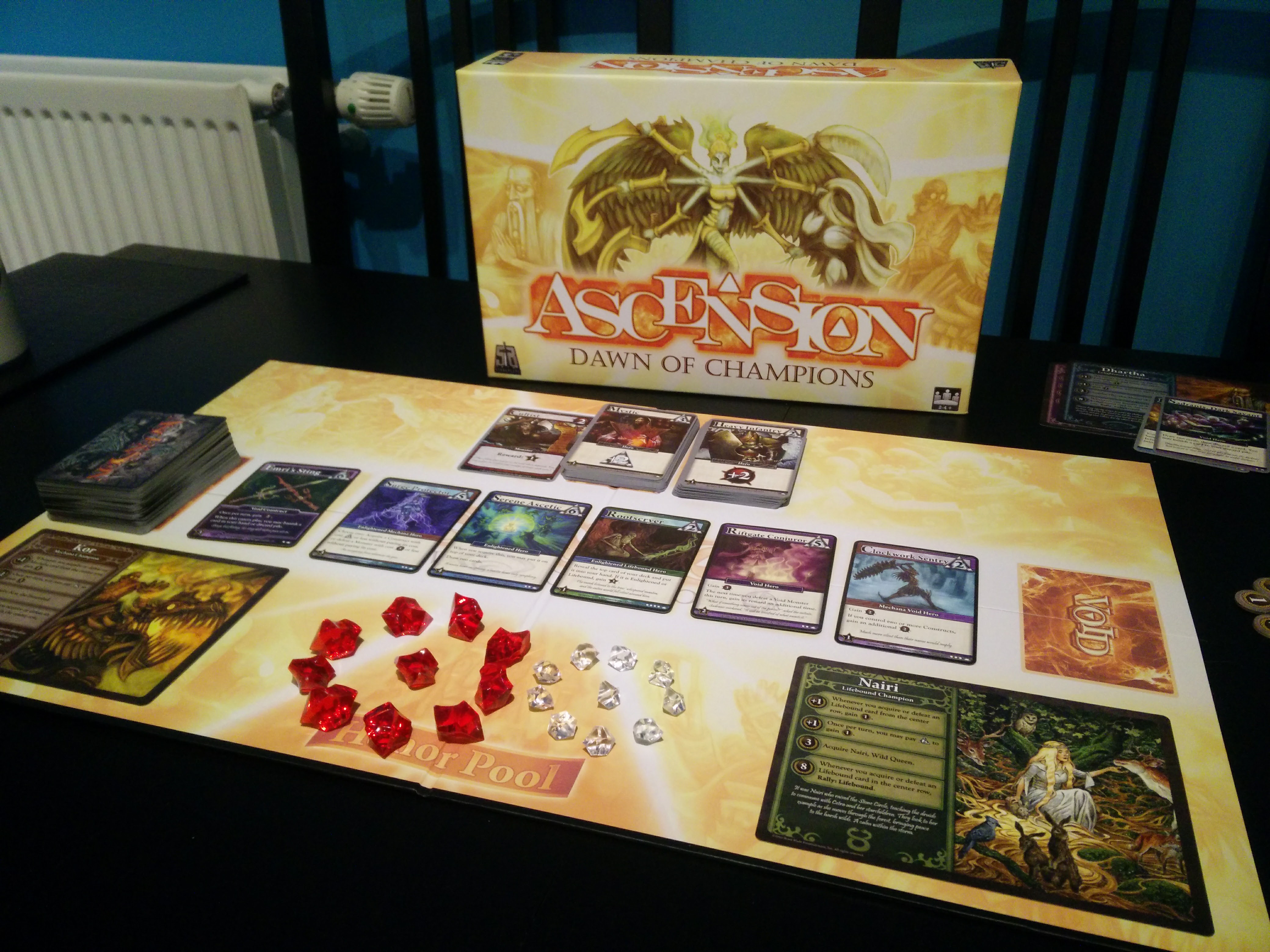 There is a downside to this game. Ultimately, you’ll advance towards your champion rewards, and gain a better deck, if you’re able to acquire heroes, or defeat monsters, of your own faction. All of this depends on these cards being available in the centre row. If you find your cards are not appearing often, you’ll likely need to switch strategy quickly, as waiting could leave you too far behind to catch up.

Ascension, Dawn of Champions adds some really interesting game mechanics into the mix. Although we were apprehensive at first, we ended up really enjoying the new additions. Whilst the reward of adding your champion to your deck is a little weak in some cases, (the cards aren’t really that good) it’s the final reward that makes it all worthwhile.

The RRP for Ascension, Dawn of Champions is £31.99, and it can be found at independent game stores, which can be found using this store locator