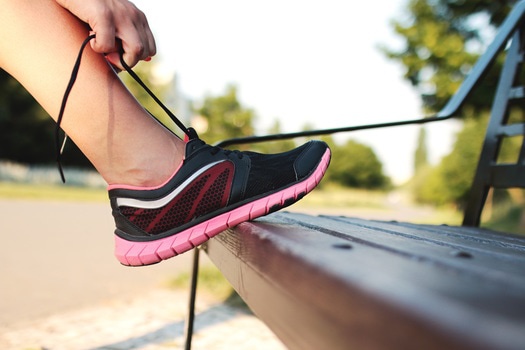 I’ve now made it to week four of my Couch to 5k journey, and in all honesty, as much as I have been struggling, I really do feel like the first three weeks were a success. I managed to complete them in less than two weeks for a start, and even though my calves are still hurting, I do feel like they’re getting better.

I’m dreading this week. I have run for five minutes in the past, but not like this. I have faith in the program as it’s got me this far, so I try to go in with a positive outlook.

Monday 16th June – Run 1 almost done. The first five minute run was agony! I’m pretty sure I was making some noises on the treadmill during this one, and the reduced recovery times worry me as my calves are not quite recovered before I have to run again. The second five minute run I couldn’t manage. I reduced the speed to 5mph but my calves were seizing up and I had to stop after two minutes and go back to walking. Even though I didn’t manage to finish the run, I’m still proud of managing the first five minutes, and overall I still did more running than the previous week by four minutes. It was a big step this week, I just really hope I manage to finish it next time.

Tuesday 17th June – Run 2 failed. Completely failed. I decided to try and run outside again around the Quays as I enjoyed it last time and the weather was perfect. As soon as I started the first three minute run my calves seized up, they felt so tight I was really struggling to run. I managed the three minutes but I was almost limping with pain afterwards, I just hoped that they would loosen up if I kept going. Started the first five minute run and just couldn’t do it. I tried slowing down but I ended up doing some kind of weird plodding almost running on the spot thing where I was hard pushed just to get my feet moving a reasonable distance in front of one another. In the end I was barely moving and I gave up, probably less than one and a half minutes into the second run. I was gutted, and my confidence was really knocked. I’m not sure if fast tracking the program has finally caught up with me here, and I walked the rest of the way, annoyed at myself for failing, and also for not trying to do just a little bit more running on the way back, even if it wasn’t the right amount. I’ve scrapped this run, and I’m going to take a day off to recover before trying again.

Thursday 19th June – Run 2 success! Well, almost. Started out much better today, went to run around Salford Quays again, was a bit warm but I managed to run in the shade for the most part. I was worried that after the three minute run the recovery wouldn’t be long enough for me to get through the five minute run coming up, but I managed it ok. I do think that as the time goes on my ‘running’ becomes super slow and more like a bouncy plod, but I just keep saying to myself that at least I’m not standing still. Running outside can be difficult as sometimes I have to combat steps and slopes both up and down hill, but even though the uphill parts are difficult, the change of terrain helps to break up the run slightly, and again keep my mind off the time, which in the long run I think helps. After the second three minute run I was struggling, and wasn’t sure if I could complete the last five minutes, and maybe going into it with a negative attitude was my downfall. I managed three and a half minutes before stopping, but determined not to be disappointed in myself, I walked for 30 seconds and then ran the last minute, so overall I was really happy with today’s run.

One thing I feel I must really stress at this moment is that when I say run, I really don’t mean run at all. I mean a plodding jog where my feet move barely a foot in front of each other every step. But it’s not walking, and it does take effort, and I’m still proud of myself for getting off my fat arse and trying. And as slow as I am, I did overtake an old woman walking on the pavement, and my gps did recognise that I ran as opposed to walked, so at least I’m not the slowest person out there…..

It’s also at this point that I did my the Color Me Rad 5k race at Heaton Park.

Monday 23rd June – Run 3 complete, and no stopping! I do think my run has become super slow now, but I’m determined to keep going, as anything is better than standing still. I ran around the Quays again today and found a nice stretch in the shade I went up and down a few times, as it’s amazing how much difference it makes in the sun. I must note though that I learnt today to run with my mouth shut, as flies do not taste nice…. I’m going to move on to week 5 on Wednesday, even though I’ve struggled this week, I think I need to keep pushing myself, and once my stamina is up to 30 minute runs, then I will work on my speed.

Wednesday 25th June – Run 1 complete. In fact I managed it without too much trouble, though I am wondering if my super slow pace needs to be upped at this point. I’m not sweating as much as I used to, and I’m barely out of breath, it’s purely the pain in my calves and feet now. To try an put it in perspective I used Google maps to try an estimate how far I ran in one of the five minute blocks, and it was only 0.3 miles, which puts my pace at 3.6mph, a massive drop from when I first started out at 5.5mph. I definitely think I need to start upping my pace again, I would like to get to 4.5mph on my next run.

Friday 26th June – Run 2 complete. I really thought that I had managed to pick up my pace on the first eight minute run, but when I work out how far I covered, I really hadn’t, my pace was only up to 3.8mph! I’m quite disappointed in this, but I’ll keep working on it. Coming up to the second eight minute run I started feeling a bit sick, because stupid me decided to have a sausage and egg butty an hour and half before my run. It was my own fault and I should have know better, but I decide to run next to the canal ‘just in case’, although I ended up being ok. Well, I was ok in the sense that I wasn’t sick, but oh my god was I in pain! The second eight minute run had my calves in absolute agony, the worst they have ever been. They were so tight I felt like I was seizing up and could barely move. I did get the whole eight minutes done but my pace was ridiculously slow. So slow it wasn’t even matching my plodding jog I managed before, and people were definitely looking at me strange this time. I’m glad I finished but I’m very worried for the 20 min run I have coming up after the weekend. I’ve decided that if I don’t manage it first time then I will just keep going until I do.

Monday 30th June – Run 3 failed. Another complete failure. I don’t know if it was too hot, my legs hurt too much or I psyched myself out, but I probably ran for about a minute before giving up. I feel a bit deflated right now, but I’m going to try again on Wednesday.

Wednesday 2nd July – Run 3 complete! Managed the full 20 minutes, and I ran approximately 1.4 miles at an average speed of 4.2mph, which I’m actually quite pleased with, even though it’s still slow, I seem to be picking up the pace slightly. My legs and feet are absolutely killing me! I’m not sure if I’ll be able to walk tomorrow, but I’m still pleased with my progress!

On a side note, I have decided to continue with the Couch to 5k program to build up my running times, but on the side I am also going to start using the Zombie 5k program to try and pick up my speed. So I’ll basically be running another 5k program from the beginning with the aim of improving the speeds I achieved on the C25K in the relative weeks as I go along. The Zombie 5k program also includes exercises to strengthen your calf muscles so I’m also hoping this will help with my pain.