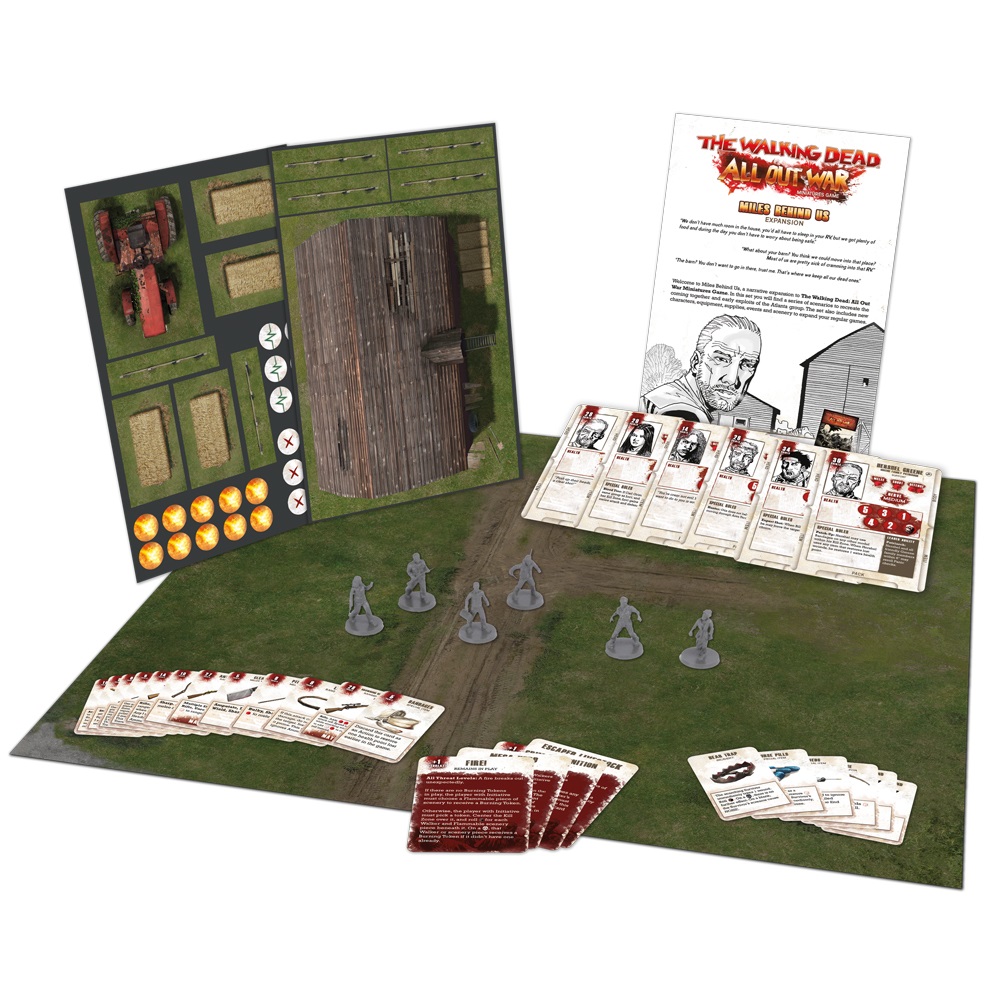 It’s been a few months since I first ventured into the world of miniatures, with the All Out War wave one set. All Out War for me is more of a ‘true’ miniature game. Unlike games such as Zombicide and The Others, All Out War feels more real, with gameplay more closely resembling the choices of a role-playing game, with added complexity and freedom of choices for the players to make. Recently we put All Out War wave two to the test, to see if it would stand up to its predecessor.

To sum up my opinions from the wave one set. I loved the game, hated the way it was packaged. I couldn’t work out why everything was sold as seperate packs when one big box would have given you everything you need, and proably brought the overall cost down a little too. While I enjoyed how the game worked, I did feel as though the scenarios were quite repetitive, so I’m looking to see if wave two adds some variety to the missions to keep things interesting.

You’ll still need the core set from wave one to play with any of the wave two expansions.

All Out War: Miles Behind Us, Farm Expansion

Miles Behind Us is a narrative expansion to The Walking Dead: All Out War Miniature Game. In this set you will find a series of scenarios to recreate the coming together and early exploits of the Atlanta group. The set also includes new characters, equipment, supplies, events and scenery to expand your regular games.

The Miles Behind Us expansion includes six solo or cooperative scenarios. The narrative campaign means that your actions in one scenario may have lasting effects on future scenarios, which is awesome! You can also play Miles Behind Us as a continuation of the campaign from Days Gone By… 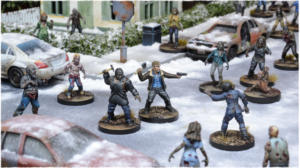 Having persuaded his fledgeling group to hit the road, Rick runs into his first obstacle – literally. The road ahead is blocked by wrecked vehicles, and swarming with Walkers. Rick has to clear the way before his people catch up and get bogged down. Thankfully, help is just around the corner.

The first scenario is pretty basic, and the only new action introduced is the ability to move a car out of the way. It’s a nice intro back into the game if you’ve not played for a while, and a good opportunity to re-familiarise yourself with the rules and gameplay.

The newly strengthened group manages to find shelter in the abandoned Wiltshire Estates, but soon discovers it had been abandoned for a reason. As Walkers swarm the manicured gardens and abandoned streets. Rick and Tyreese lead a rear-guard action to save Julie and Chris, while the others escape back to open country.

While this scenario is difficult, and the concept of a rescue is a new challenge, I’m not seeing much in the way of variety yet from this expansion, but I am seeing a nice progression for my characters (particularly Rick and Tyreese) by applying the effects of the campaign mode.

While scouting the woods beyond Wiltshire Estates. Carl Grimes is shot accidentally by a farmhand names Otis. Desperate, Rick follows Otis back to his farm, carrying Carl even as the Walkers shamble out of the woods behind them, attracted by the gunfire.

This scenario again is a bit different. You have to really consider the strategy you use to avoid conflict and safely escape with Carl. That being said, I’m finding myself getting bored moving from one edge of the board to another.

Chapter 4: Attack on the Farm

A herd of Walkers approaches the Greene family farm, and Hershel recognises some of them as former friends and neighbours. He organises his family to do the Cristian thing, and shepherd the lost souls safely to the barn. There, Hershel’s family hope the Walkers will be safe until a cure can be found for their ‘sickness’…

Ok, so this time we’re capturing Walkers rather than killing them.  It does shake things up a little, but we’ve done this before when playing the solo starter set. 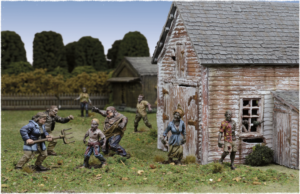 Rick’s group and the Greene family form an uneasy alliance, and the imprisonment of Walkers within the Greene’s barn is a source of contention. Rick’s view is proved tragically right when the barn is compromised, and the Walkers escape.

Finally! This scenario really feels like a new challenge, There’s a lot to think about and consider when taking actions, and the win condition feels very different. Not only do you have to deal with an endless horde of Walkers, but you will continue to do so until you secure and burn down the barn. With so much going on, you can quickly be overwhelmed if you don’t have a clear strategy and keep an eye on all moving pieces. It’s also nice to introduce new characters, with new abilities, and see a different dynamic in the team.

With their resources depleted after the fight against the Walkers, Rick and Hershel send runners to a nearby town to find fresh supplies.

While the difficulty on this scenario is high, we’re back to moving from one side of the board to another, and I’m not feeling a sense of excitement or fulfilment when playing anymore. It is good to have new characters interacting though, and there are a lot of dynamics and abilities to take into account in this scenario, plus, your campaign mode really starts to kick in again. I’ll be very interested to see how the character progression continues in future campaigns. I’m quite protective of my group right now, even if they do have a few missing limbs…

Aside from the lack of variety, the campaign mode adds a really interesting twist to the game, especially if you continue this from the Days Gone By expansion. The ability to add experience to surviving players (an additional die) and save bitten characters with an amputation (which continues to provide a handicap in later scenarios) are great aspects of the game. That  I’m still massively lacking real variety in the scenarios, which impacts on my enjoyment of the game.

Once again, you don’t need the booster packs, but having Glenn, Maggie, Tyreese, and Julie & Chris will help the flow of the game. The wave two set also includes Ezekiel and Negan. These miniatures are awesome! But there’s not much use for them just yet.

As much as I love The Walking Dead, just acting out the story of the survivors is becoming very restricting. The challenges, tactics and win conditions are becoming more and more repetitive, and I wonder if choosing a Walking Dead theme is now hindering progress. I’m almost torn between the outstanding character development and ability to play as a campaign, and the complete lack of variety in scenarios. There are some new actions in wave two, and the setting is different, just not different enough.

Don’t get me wrong, gameplay for Miles Behind Us remains excellent. Personally, I’m also pleased the scenarios are solo/cooperative, as competitive scenarios cause arguments in our household. As good as this game is, I’m still left wanting more, especially considering the extra cost involved with purchasing this kit. 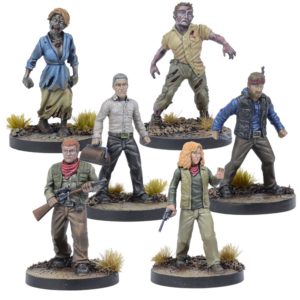 I’m desperate now for something different. I want buildings, with mazes to navigate, hidden rooms hiding secret surprises. New challenges, new tactics, and new win conditions. Fingers crossed for wave 3, I have high hopes for the future of this game!

The RRP for the All Out War sets I have reviewed are: